BE A PART OF HISTORY!! JOIN US FOR A REVOLUTIONARY DISCOURSE WEBINAR! 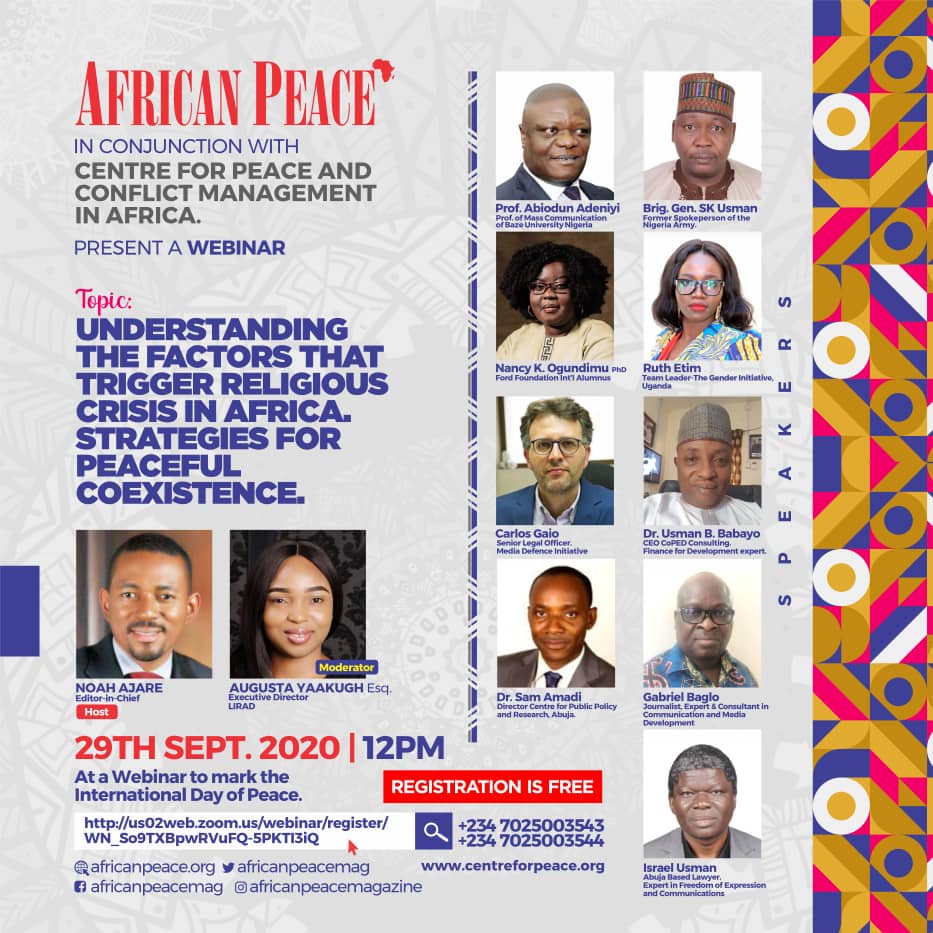 Cordially invites you to a webinar titled:

“Strategies for Peaceful Coexistence: Understanding the Causes and Factors that trigger Religious Crises”

Goals of the webinar:

Register in advance for this webinar:

After registering, you will receive a confirmation email containing information about joining the webinar.

The religious landscape of sub-Saharan Africa has changed dramatically. As of 1900, both Muslims and Christians were relatively small minorities in the region. The vast majority of people practiced traditional African religions, while adherents of Christianity and Islam combined made up less than a quarter of the population, according to historical estimates from the World Religion Database.

Since then, however, the number of Muslims living between the Sahara Desert and the Cape of Good Hope has increased more than 20-fold, rising from an estimated 11 million in 1900 to approximately 234 million in 2010. The number of Christians has grown even faster, soaring almost 70-fold from about 7 million to 470 million. Sub-Saharan Africa now is home to about one-in-five of all the Christians in the world (21%) and more than one-in-seven of the world’s Muslims (15%).

A study by a German academic, Matthias Basedau, says religious conflicts in sub-Saharan Africa have been on the rise for decades. Conflicts that have a religious dimension are becoming more common worldwide and sub-Saharan Africa is no exception. The region is generally vulnerable to conflicts because many states in sub-Saharan Africa are often weak. It also has to do with the fact that religious conflicts spill over from North Africa and the Middle East; either directly from Libya or Algeria or indirectly through the spread of more radical versions of Islam. However, religion is only one aspect of these conflicts – they can also be ethnic conflicts, or conflicts over power or resources. There is no conflict based purely on religion.

According to Genocide Watch, Nigeria has become a killing field of defenseless Christians. Reliable sources show that between 11,500 and 12,000 Christians have been massacred since June 2015 when the Buhari Government of Nigeria came to power.  These statistics are based on careful records kept by church groups that include the names of victims and dates of their murders.

This webinar seeks to answer the following questions

* What are the causes of religious conflicts?

* Why are countries in sub-Saharan Africa so vulnerable to this kind of conflict?

* What role has globalization and social media played in increasing religious conflicts?

* What are the most practical alternative ways of enhancing the capacity of the inter-religious mediation group to effectively resolve religious conflicts?

* What strategies can be adopted for peaceful co-existence?