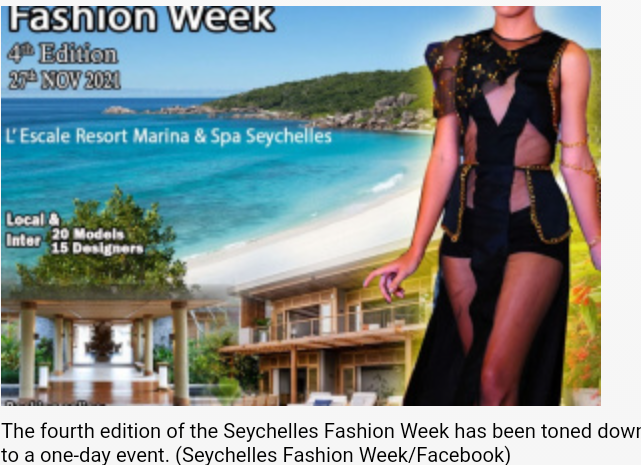 Twenty designers will participate in this year’s edition of the Seychelles Fashion Week on November 27, surpassing the expectations of the organisers.

Initially scheduled to take place from November 24 to 28, the fourth edition of the Seychelles Fashion Week has instead been toned down to a one-day event that will showcase the work of local and international designers.

The organiser, Terry Carolla, told SNA on Sunday that originally “we wanted to have it with 10 designers in view of the pandemic and travel constraints. But when we opened the registration online we had designers from all over the world wanting to participate.”

Designers who have confirmed come from South Africa, Qatar and Madagascar, as well as six from Seychelles. Ten designers are from South Africa as “they are getting support from their government to participate in the event,” said Carolla.

He said that the biggest issue for some of the designers who were interested are vaccinations and travel restrictions.

The event will take place at L’Escale Resort Marina and Spa, on the eastern coast of Mahe, the main island of Seychelles, an archipelago in the western Indian Ocean.

Seychelles Fashion week is an event that aims to bring fashion lovers to a paradise in the middle of the Indian Ocean from all continents with tremendous creativity and culture.

Seychellois designer Darren Esther with his D Axtra brand and Athalia Barbe with her Elegance Africaine Seychelles will be among the local talents that will be showcasing their designs alongside their international counterparts.

Dubbed the ultimate and biggest fashion show of the year, the event will be officially launched by the Principal Secretary for Tourism, Sherin Francis.