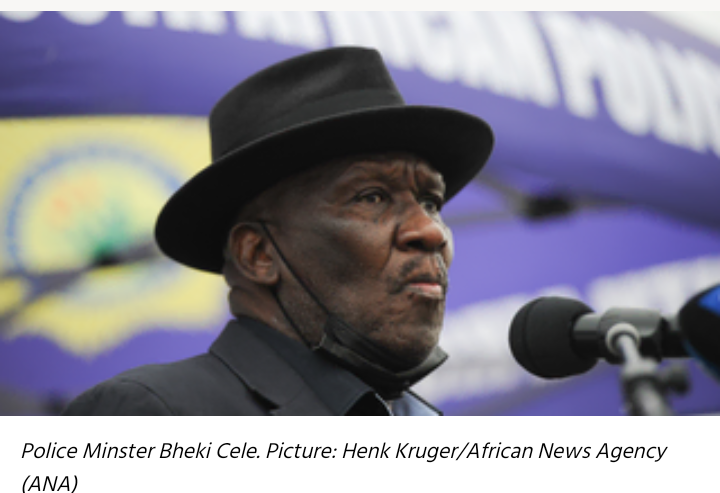 Hammanskraal in Gauteng, Thohoyandou in Limpopo, Inanda in KwaZulu-Natal, and Lusikisiki in the Eastern Cape are among SA’s rape capitals, according to Police Minster Bheki Cele.

He revealed this when he presented crime figures between the period July 1 to the end of September on Friday.

Cele painted a grim picture with a double-digit spike in rape after more than 10 000 people were reportedly raped in three months when lockdown levels 4, 3 and 2 were in effect, and when the Covid-19 pandemic that wrecked havoc across the world was in effect.

“This showed a spike of 634 cases, amounting to a 7.1% increase compared with the previous reporting period.”

It was found that 400 of the rape cases were domestic violence-related, meaning the victim and perpetrator had a relationship.

“With almost 10 000 people being brutalised and sexually violated in just three months in South Africa, it is a disgrace and deeply disturbing.

“The majority of people raped are women, and those most vulnerable in our society. These statistics show they are often violated by people they know and trust in the comfort of their own homes or in places where they thought they were safe,” Cele said.

Cele said to combat Gender-Based-Violence the police were in the process of establishing GBV desks in all police stations in the country to solemnly focus on GBV cases.

“To date, 134 such desks are in operation, and the goal is to have a GBV desk in all police stations countrywide. The majority of our stations have victim-friendly facilities.”

He said the July unrest in parts of the country, sparked by former president Jacob Zuma’s jailing where 342 people died, contributed to the increase in murder statistics.ADVERTISING

“In the three months of reporting, a 20.7 % increase in murder was recorded.

“Between July to end of September, 6 163 people were killed in South Africa. This is 1 056 more people killed compared with the corresponding period in the previous financial year.

“While it is clear that the July unrest contributed to the murder figures before us, we must concede that other provinces such as Free State, Limpopo, Mpumalanga, Northern Cape and the North West recorded double-digit increases in murder cases during this reporting period.”

According to Cele, 1 334 murders occurred at the home of the victim or of the perpetrator.

He said 2 424 people were murdered in public places such as streets, open fields, parking areas and abandoned buildings, and 424 of the murders occurred at taverns, shebeens, nightclubs and bottle stores. A total of 23 SAPS officers were killed between July and September, with six being killed in KwaZulu-Natal, followed by Gauteng and the Western Cape, each recording four police killings.