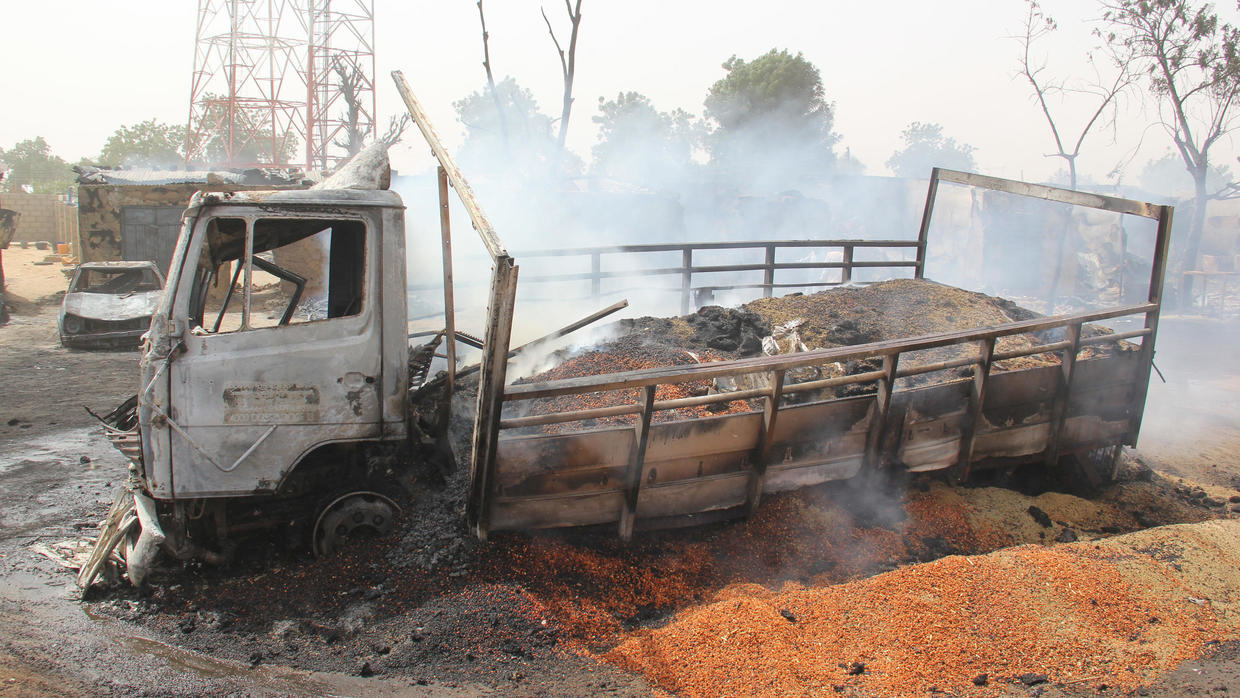 Jihadists killed at least 30 people and abducted women and children in a raid in northeast Nigeria’s restive Borno state, a regional government spokesman said on Monday.

The attack Sunday evening targeted the village of Auno on a key highway linking to regional capital Maiduguri.

They targeted travellers who had stopped for the night and torched vehicles.

AFP journalists saw the smouldering wreckage of trucks, buses and cars lining the road at the scene of the attack.

The jihadists “killed not less than 30 people who are mostly motorists and destroyed 18 vehicles,” Bundi said in a statement after visiting the scene.

The assault, some 25 kilometres (15 miles) west of Maiduguri, occurred in an area where fighters from the Islamic State West Africa Province (ISWAP) have been active, mounting roadblocks to target security forces and civilians.

There was no immediate claim of responsibility for the attack.

Witnesses said jihadists set alight 30 vehicles in the raid, including trucks that had stopped overnight on their way to Maiduguri.

“Many of the drivers and their assistants who were sleeping in the vehicles were burnt alive,” said Babakura Kolo, a member of a state-backed anti-jihadist militia.

The jihadists combed through the village, looting and burning shops and property before withdrawing, he said.

Kolo told AFP the militants took away three buses carrying women and children to Maiduguri which had parked in the village for the night.

“We still don’t know how many women and children they took away but the number is huge,” he said.

The highway has been increasingly targeted by ISWAP militants in recent months.

Jihadists disguised as soldiers have set up roadblocks to abduct and kill passing travellers and have above all targeted Christians and members of the security forces.

The UN has complained of an upsurge of violent attacks in recent weeks across the conflict zone.

The increase comes after the Nigerian army last year launched a new strategy that saw it withdraw troops from remote bases into larger so-called “super camps”.

The military says the tactic has helped to stem jihadist attacks but local residents and aid workers say it appears to have bolstered the jihadists by leaving vast swathes of territory unprotected.

The decade-long Islamist insurgency has killed 36,000 people and displaced around two million from their homes in northeast Nigeria.

The jihadists have split into rival factions with one group affiliated to Islamic State group and the other loyal to longtime Boko Haram leader Abubakar Shekau.

The violence has spread to neighbouring Niger, Chad and Cameroon, prompting the creation of a regional military coalition to fight the insurgents.