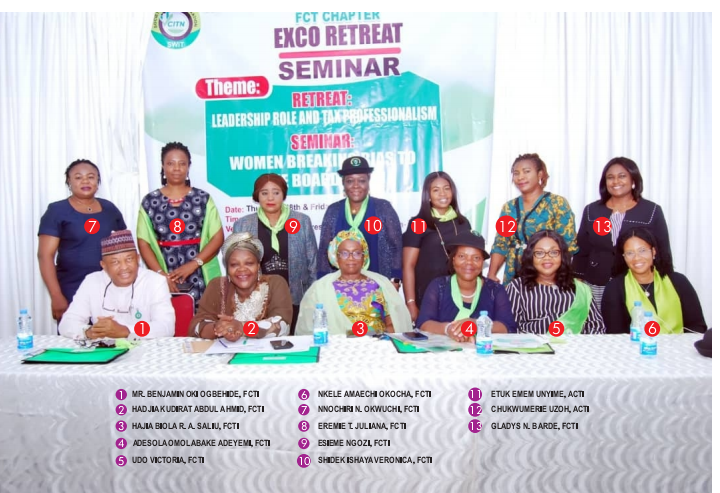 The Society of Women in Taxation (SWIT) FCT Chapter has urged professional women in Taxation and all other women professionals in the country to put in their best in the development of the country as agents of change through tax compliance education to balance the legitimate women’s rights and as a strategy for push of legislative Affirmative Actions.

“Women breaking bias to the board room cannot be more appropriate especially at this time when gender diversity with inclusiveness is taking the front burner in recent discuss.

“We need to work assiduously to raise awareness, combat gender stereotypes, and encourage a culture of diversity that recognises the lofty contribution of women to nation building.

“In no particular order, Erelu Obada, Justice,Mariam Aloma Mukhtar (former CJN), Dr. Ibukun Awokisa, Folorunsho Alakija, Ifeuko Omogui- Okauru MNI, Past CITN President, Dr. Teju Somorin FCTI, Ngozi Okonjo-Iwela, Hon.Abike Dabiri, just to mention but a few are among a long list of women that have undoubtedly in the face of severe bias and challenges risen through the ranks in their various spheres and validate the famous saying “what a man can do, a woman can do better”.

“These inspiring group of women made their mark, broke ‘the ceiling’ and challenged the norm.

“Gender based bias is real, tangible and plays out every day around us and could be explicit but more often than not, it is implicit and occurs when individuals attributes certain attitudes and stereotypes to another person or group of people.

“I doubt that I would be wrong to state that women are the first and most vulnerable to bias. To break this bias, it is imperative that we utilise our God-given attributes such as resilience, doggedness, laser sharp focus, selflessness and purposefulness etc.

“As women and mothers, we are effectively the first point of contact for the social development of the Society, the attention we give and values we pass to our children, wards, and family in general, the firmness and seriousness with which we pass these values, if translated to the work place would enable us excel far more than we can ever imagine.

“Build a Woman and you build a Nation”. As such Women are capable of influencing change in Taxpayer behavior and that of the future of our children who are the next generation of Taxpayers.

“We must eschew conducts that do not meet the standards expected of Tax Practitioners, strictly adhere to the standards of the profession and ensure we discharge our responsibilities in an ethical manner,” she said.

Also speaking, a resource person Hajia Kudirat Abdul-hamid FCTI, who spoke on the role of leadership and time management, described successful leaders “as those who launch directly into their major tasks and then discipline themselves to work steadily and single mindedly until those tasks are complete.

A financial consultant and Past Chairman CITN Abuja District & Society, Benjamin Oki Ogbeide FCTI enjoined women “to break out of their comfort zone…”