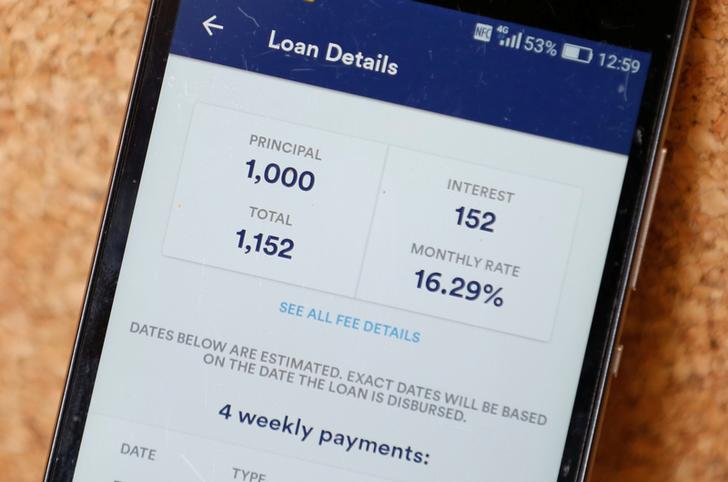 Traditionally, African lenders use credit bureau scores, assessing, for instance, if a customer has a history of missed credit card payments. When no history exists, they evaluate social demographics: is the customer female – in which case they are likelier to repay – do they work in a stable job market and can they prove a regular income? But this can put those who are unbanked or informally employed at a disadvantage.

Michele Tucci, chief product officer at fintech company Credolab said: “African lenders lack data to make good credit decisions and social demographic data can bring you only so far.” He estimates that African lenders cannot obtain credit bureau scores for 70% of customers and simply reject them. Indeed, 57% of Africans remain unbanked, have a cash-in-hand income or prefer to use debit over credit cards.

Home-grown fintechs, such as Cape Town-headquartered Jumo and Nigerian start-up Kiakia, have since emerged while overseas players like Credolab and San-Francisco-headquartered Branch – which analyses SMS data – are also gaining traction in Africa. Among lenders, First National Bank of South Africa, Kenya’s NCBA Group and Equity Bank and Orange Bank have been early adopters.

Singapore-based Credolab, established in 2016 and present in South Africa, Nigeria, Kenya and Ghana, is one player using mobile metadata to assess credit risk. The fintech embeds a mobile software development kit (SDK) into lenders’ banking apps and collects privacy-consented micro-behavioural data points on Android and iOS. This includes the percentage of selfies on a customer’s phone, the number of games installed, videos created per month, if a virtual private network is used and even the speed at which they type – all collected once one applies for a loan.

In-built machine learning then determines the probability of a default and generates a credit score. “We mirror existing permissions the app requires to work [such as access to the phone’s camera, contacts and storage] and we collect metadata that none of the lenders are collecting, not even the most sophisticated ones,” said Tucci.

Other emerging machine-learning methods include analysing mobile-money transactions and digital personality questionnaires. Creditinfo Group, which has credit bureaus in 11 African countries, is using such tests in three of its African markets.

Dmitry Borodin, head of products and decision analytics at Creditinfo, said mobile wallets are today the best source of alternative scoring in Africa due to the penetration of mobile money. “That data is really strong because very few people would be using credit or debit cards, but by using mobile-wallet transactions, we can get a proxy of income and compute other strong predictors.”

Creditinfo has also partnered with Coremetrix and Compuscan in South Africa to develop 5- to 20-minute personality quizzes for customers with thin credit profiles. These customers complete 20 to 30 questions online and machine learning creates a map of personality traits correlated to credit risk.

Questions include what a customer would do if they won $200 on the lottery, with those saying that they would save the money presenting lower risk. AI also analyses behavioural patterns, such as the time to respond and the length of replies, rooting out customers trying to game the system.

Aristide Ouattara, a partner and risk advisory leader at Deloitte Afrique, warned that while alternative credit scoring is evolving, it is in its infancy: “African banks are still setting the minimum base of credit-risk management tools and frameworks,” he said. But he described such methods as the future and expects banks to join in soon.

According to Deloitte, the shift could come swiftly due to incoming changes to Basel III and IV – a global but voluntary regulatory framework for the financial sector – that will allow more sophisticated credit-scoring methods. “Africa is used to going very quickly on to different innovations, such as mobile banking, so we will have a leapfrog in this phenomenon too,” said Ouattara.

Kenya has demonstrated what is possible through Safaricom’s M-PESA service. We see potential in West African countries where similar technology and mobile payments are also in place, but they’re still catching up.

Deloitte started developing machine-learning techniques several years ago in Europe using SAS and Python and is expecting to roll out these tools within the African financial industry in the coming years.

Another consulting firm, McKinsey, sees strong financial-inclusion benefits in machine-learning credit scoring, which can be as wide-ranging as looking at a customer’s car model, its age, mileage and even the colour, while others are assessing the quality of social-media connections.

“These metrics are good when other information is scarce,” Sergey Savitskiy (leader of McKinsey’s digital-lending services in Eastern Europe, Middle East and Africa) and Umar Bagus (head of McKinsey Analytics in Africa) said in a joint emailed statement. But when traditional data is available, alternatives have “less impact on the quality of credit assessment”, they said.

Reliability is a huge concern, even in Europe where most lenders are already using alternative metrics. Hervé Phaure – leader of credit risk for Deloitte in France – who has experience developing machine-learning tools, warned that customer behaviours can change rapidly. “If that human behaviour is not stable, the model will not work,” he said.

Another issue is data availability. A lender assessing a small-business loan can web scrape a company’s online presence, but only if such information exists. “The smaller the business, the less active they will be in terms of navigation and news,” said Phaure. And even when web data is available, “There is more and more information on the net that is less and less reliable,” Phaure said.

When it comes to psychometric testing, Borodin urged financial institutions to have capacity to interpret AI algorithms and reliable model-management infrastructure, otherwise, following the Covid-19 pandemic, they may miss behavioural shifts not yet present in historical data. In his view, psychometric scores should not be the only source of assessment, but they can provide strong support for decisions on customers without credit histories.

Credolab said out of the million data points collected, its machine learning may only decide that 20 are valuable. “It’s fair to assume that 98% of these million features are useless in terms of ‘information value’ but we need to assess them anyway to find those that are indeed predictive for each lender,” said Tucci.

Mobile metadata checks work even on low-end Android phones, but network speed and phone storage are challenges, as people may prefer to install social media apps over lending ones. “This can be overcome by having a mobile responsive website that looks like an app, but doesn’t require the customer to download anything,” Tucci said. On mobile websites, Credolab can analyse typing and scrolling speed, among 120 other behaviours, which machine learning may determine are loan-default risk factors.

These fintechs are using personal data from an African customer in another jurisdiction where we don’t have any convention regarding the data protection or confidentiality.

While web-based analysis is helpful in Europe, where loan applications are mainly made online, the African lending journey is trending towards mobile apps. Deloitte’s Phaure said that growth will therefore depend on mobile-money usability. “As time goes on, we are adding additional steps which make mobile payments not direct at all,” he said. Phone passcodes, banking app passwords and SMS verifications are often needed to verify IDs. “Soon it will be easier to call someone in the banks,” said Phaure, as he urged greater use of facial recognition.

According to Tucci of Credolab, machine-led credit scoring is growing faster among mobile lenders than banks. “I think banks are comfortable with the way they do business,” he said. “We see some demand, but very slow reactions.”

Credolab had its first African client in 2018 – from South Africa – and the fintech is now working with two banks in the country. Elsewhere in Africa, it works solely with mobile lenders. The fintech says applications for mobile metadata include mobile airtime credit, nano and personal loans, auto finance and bike loans. One African lender is also using Credolab for loans of up to $10,000 to small and medium-sized enterprises, while the fintech is seeing strong growth in the ‘buy now, pay later’ segment.

McKinsey’s Savitskiy and Bagus said: “AI can also help define the best limits for a given customer. We’ve seen a full range from microloans all the way up to mortgages.”

With only half of African governments adopting data-protection laws, a big concern is data privacy. Campaign groups such as Privacy International and others are wary that behavioural data could go beyond credit scoring to mass surveillance and Big Brother-like social credit scores.

Credolab says it only collects behavioural metadata – such as the number of new contacts added last week and the ratio of incoming to outgoing SMS traffic – and nothing personal like names of contacts or the content of photos, SMS messages and PDFs.

“We aren’t some kind of shady SDK technology scraping data without customers knowing it,” said Tucci, adding that Credolab will not know the identity of the applicant, which could insulate lenders from reputational risks in case of data breaches. Tucci also encourages lenders to make a prominent disclosure about the data collection within the app’s user interface rather than hiding terms and conditions in a hyperlink.

Ouattara of Deloitte said some fintechs that specialise in credit risk may use application programming interfaces from platforms located outside Africa. “And so, these fintechs are using personal data from an African customer in another jurisdiction where we don’t have any convention regarding the data protection or confidentiality.”

A win for financial inclusion?

AI credit scoring has been touted as a way to bring credit access to an estimated one billion people across the world who lack a credit history. But is it really expanding credit access in Africa?

A European Parliament study on the ethics of AI, published in March 2020, warned that machine-led scoring is still human generated and could simply perpetuate biases. The study gave the hypothetical example of an individual being refused a loan and a route out of poverty after machine learning determines the quality of the clothes they buy correlates to income and hence creditworthiness.

Similarly, Credolab lacks visibility on financial inclusion. But for every million applications it has processed in Africa, the fintech says it is likely that 200,000 borrowers were given access to credit, 180,000 of which were first-time borrowers. But Tucci said loan decisions ultimately rest with lenders, which have mainly focused on the strongest applicants during the pandemic.

Next steps for tech

Credolab sees Egypt, Morocco and Ghana as growth prospects, particularly among telcos selling smartphones in monthly instalments, which is currently done without credit scoring. The fintech hopes to recruit its first sales staff in Africa, potentially in Nigeria, to drive business. Credolab is also experimenting with user-interface interactions within mobile lending apps, analysing for example, how and how often a customer tweaks loan lengths and amounts, as well as time spent reading terms and conditions.

Borodin of Credinfo said: “Kenya has demonstrated what is possible” through Safaricom’s M-PESA service. We see potential in West African countries where similar technology and mobile payments are also in place, but they’re still catching up.”