Why I suspended green cards — Trump 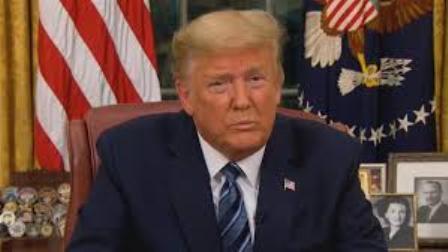 Addressing newsmen on Wednesday evening at the White House, Trump said he took the decision to protect American workers as the country prepares to reopen for business after a shutdown that cost millions their jobs.

The order, he said, would last for 60 days subject to review and possible extension “at the appropriate time”.

“In order to protect our great American workers I have just signed an executive order temporarily suspending immigration into the United States.

“This will ensure that unemployed Americans of all backgrounds will be first in line for jobs as our economy reopens,” he said.

The president added that the move would “preserve our healthcare resources for American patients” affected by the disease.

The News Agency of Nigeria (NAN) reports that immigrant visas are those issued to foreigners approved to move permanently to the U.S.

Majority of the recipients, who automatically qualifies for green cards, are family members of U.S. citizens or permanent residents.

Some immigrant visas also are granted to those who have jobs waiting for them, including nurses planning to work at hospitals, the online encyclopedia adds.

However, Trump highlighted some exemptions in the new order, including farmers relying on temporary visas to bring labourers from Latin America.

On April 17, while announcing a three-phase plan to reopen the economy, the president had hinted at tighter immigration restrictions to relevant new COVID-19 infections from abroad.

“As we begin a science-based reopening, we must be extra vigilant in blocking the foreign entry of the virus from abroad.

“Border control, travel restrictions and other limitations on entry are more important than never before to keep the virus in check and allow Americans to get back to work,” he said.

Some critics are accusing Trump of hiding behind the pandemic to advance his political agenda on tighter immigration.