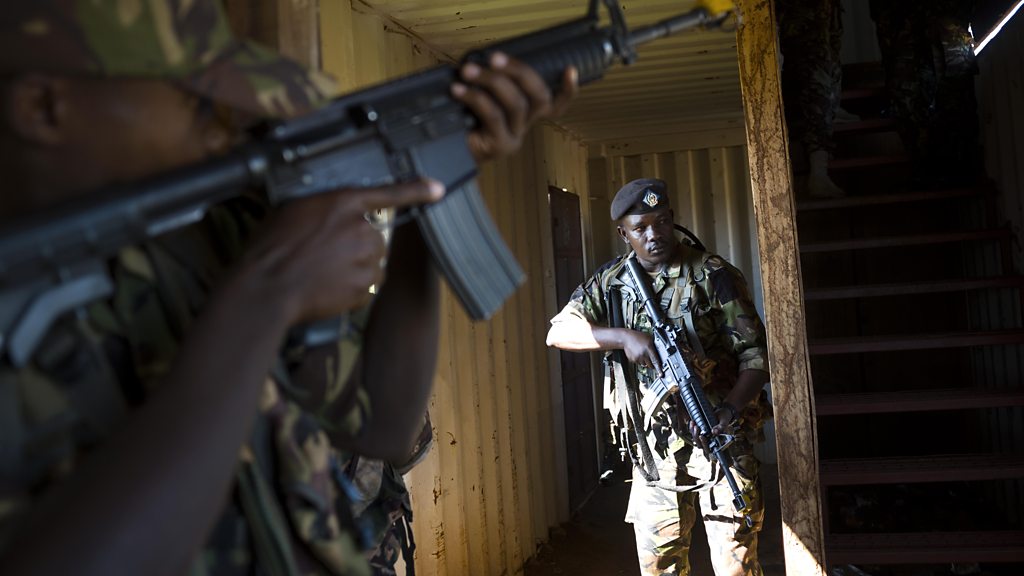 Scottish troops are in demand in east Africa to help train soldiers in their fight against the Islamist militant group al-Shabab.

The Scots are supporting the Kenya Defence Forces (KDF) who have been fighting inside neighbouring Somalia for almost a decade.

It is not a conventional war. The Kenyans are taking on al-Shabab, a terrorist group banned by both the US and the UK, which uses guerrilla tactics to inflict maximum damage on its enemies.

Its methods are similar to those used by insurgent groups such as the Taliban in Afghanistan.

So the Kenyan forces have asked the British army for training in how to deal with threats such as IED (improvised explosive devices) and terrorist tactics.

Over the past couple of years, troops from the Scots Guards have regularly visited Kenya to deliver two-week training courses.

Sgt Paul Monkhouse, from Greenock, has almost 15 years in the army, joining when he was 18.

He says: “It’s all about international relations. We give the KDF our skills and our experiences as an army so they can see to that threat for themselves and we don’t need to send our troops over there to deal with it.”

It is an intensive, condensed training course that concentrates on the skills and drills needed to fight against a faceless enemy.

Sgt Kenny Wallace, from Kirkcaldy in Fife, has delivered similar training around the world as part of the British Peace Support Team.

Part of the training is called “protected mobility” and centres on the best uses for armoured vehicles such as the Mastiffs used by the British in Afghanistan.

They also “train the trainer”, allowing the Kenyans to deliver the courses themselves to their own troops.

“It is showing to the wider world that we are here and we can help,” he says.

Over the two-week course he says he has seen an improvement in the Kenyans’ confidence.

“They’ve picked up on a lot of the drills and skills and our teaching methods,” he says.

“We’ve learned a bit from each other. The guys themselves have come on leaps and bounds.”

The official reason was that Kenya’s national security was threatened by al-Shabab operations in Somalia.

The man in charge of the training courses, Lt Colonel Jonathan Hipkins, says Somalia is a “failed state” and its problems have a tendency to bleed across the border into Kenya.

In January, three Americans were killed when al-Shabab attacked a military base in Kenya.

Other incidents include a massive attack on a Kenyan military base in Somalia’s el-Ade town in January 2016, killing many soldiers.

Al-Shabab has also staged several attacks in Kenya, including the 2015 massacre at Kenya’s Garissa University, near the border with Somalia.

A total of 148 people died when gunmen stormed the university at dawn and targeted Christian students.

In 2013, al-Shabab’s gunmen stormed the Westgate shopping mall in the Kenyan capital Nairobi, resulting in a siege which left at least 67 people dead.

Lt Colonel Hipkins said the Kenya forces were in Somalia to provide space and time for the Somali national security force to develop and take over internal security of their own borders.

It is officially a peacekeeping operation but casualties suggest that peace is being hard won in Somalia, rather than kept.

But payments made to the families of soldiers killed in Somalia reveal that approximately 2,000 Amisom peacekeepers have died on deployment since 2007.

The mandate of the African Union forces to be in Somalia is set to end in 2021.

Lt Colonel Hipkins said there were still “significant challenges” before they could safely withdraw.

Despite teaching Kenyan troops new short-term tactics, there are long-term strategic questions about just what UK training can achieve against a still very present al-Shabab.

He said: “Are we walking out of Somalia like the Americans walked out of Vietnam? This is the picture that is emerging.”

Mr Musamali points to the US forces negotiating a peace with the Taliban as a model for Kenya to follow with al-Shabab.

“The leadership of al-Shabab can be brought to the table and then they can come up with a solution that is not military,” he said.

Nonetheless, for the foreseeable future, Scottish troops will continue to be among those training the Kenyan forces in the skills they need.

Warrant Officer Class Two Paul McCann says the hardest thing for the Scots was coming from the cold of a British winter to the 35C heat in Kenya.

“It has been difficult with that quick transition and not really getting the time to acclimatise,” he said.

“The camp itself is austere but it is no different to what an infantry man does as his normal daily business.”

He said the Kenyans were a “friendly bunch” whose heritage and traditions were very similar to the British army.

“As soldiers do when they get together, we swap war stories,” he added.