What to know about the Middle East this week? | News 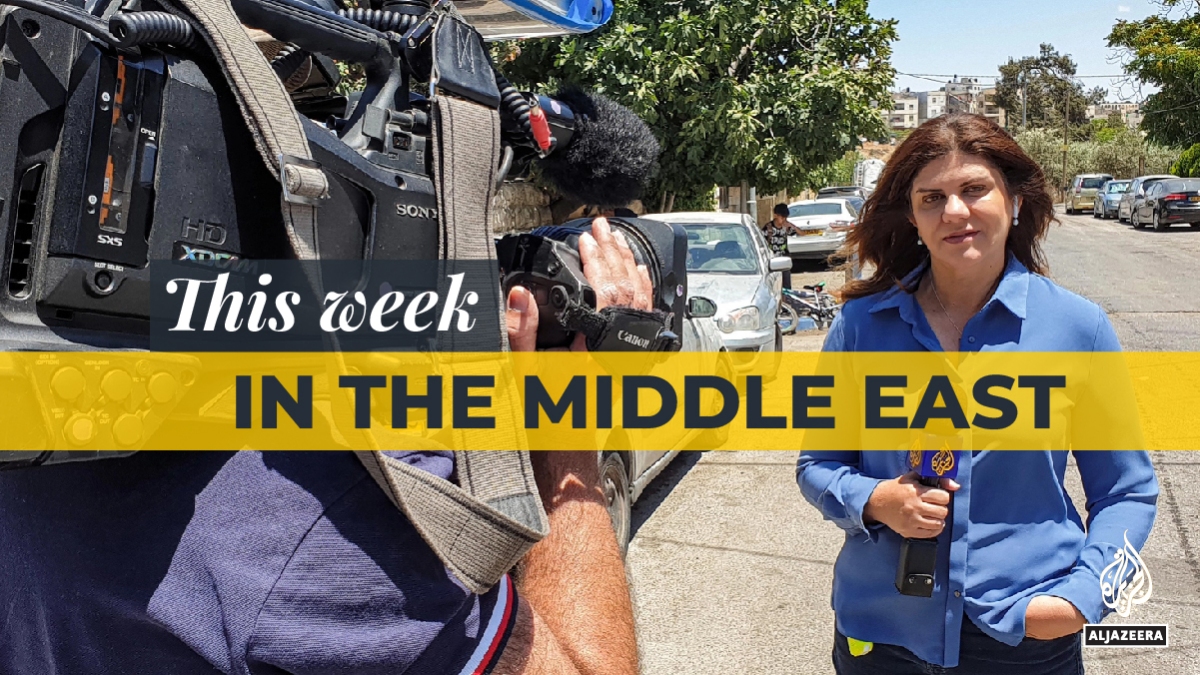 Welcome to the second edition of ‘This Week in the Middle East’, a weekly round up of what happened in the Middle East and North Africa. If you were with us last week, welcome back – and if you’ve just signed up, we’ll still count you as an early fan. You can sign up to get this straight to your inbox using the widget further down the page.

“They shoot Ali. Then they shoot Shireen. And then they’re still shooting at me.” That’s how journalist Shatha Hanaysha remembers that horrible moment back in May, captured on video taken just after Israeli forces had shot and killed her colleague, Al Jazeera correspondent Shireen Abu Akleh.

Hanaysha was speaking to The Take, in the first of a two-part series on the investigations into the veteran Palestinian journalist’s death. She makes one request: Justice.

On Monday, Israel’s changing narrative on the killing shifted from its initial denial of any involvement to an admission that it was probably one of their soldiers who killed her – “accidentally”.

After muddying the waters for several months, the Israelis now say there are no grounds for a criminal investigation, and won’t be prosecuting any soldier – case closed.

You can listen to the first episode of The Take about the Israeli investigation here. The second episode looks at the American investigation and is available here.

Abu Akleh was killed while reporting on the rise in Israeli raids on the occupied West Bank, and the city of Jenin in particular. Those raids haven’t gone away with her death – if anything, they’ve gotten worse.

The Israeli military has killed five Palestinians in the last week – bringing the Palestinian death toll this year to more than 140.  Attacks by Palestinians in Israel and the West Bank have killed 19 people in the same time frame. An attack on a military bus on Sunday injured six Israeli soldiers.

Meanwhile, the restrictions imposed on Palestinians continue. On Monday, Israeli authorities planned to introduce limits on foreigners in the West Bank who want to visit or move to the area.

The regulations were widely criticised, including by the US ambassador to Israel. They included a provision that would have required foreigners to inform the Israeli authorities about any new relationship with a Palestinian within 30 days of it starting. Our own senior political analyst, Marwan Bishara, called it a “war on love”. On Sunday, the Israelis backtracked, amended some of the most severe restrictions (no more pressure to declare your love to the military) and delayed their introduction until October.

Elsewhere, in Yemen, the security vacuum brought about by the war there is allowing al-Qaeda to grow. Twenty separatist fighters, backed by the United Arab Emirates, were killed in an al-Qaeda attack in the south, while on Saturday, al-Qaeda released a video showing a Bangladeshi UN worker kidnapped six months ago.

Turks are growing frustrated at the increasing number of Schengen visa rejections they’re receiving. The visa, which allows you to travel to 26 European countries, used to be pretty easy to get. But the rejection rate has gone from 4% in 2014 to almost 17% today, and the Turkish government wants to know why.

It’s not all bad news

Ons Jabeur has become the first Arab and African tennis player to reach the US Open semi-finals after she won her quarter-final on Tuesday. The Tunisian star had already drawn widespread attention when she reached the Wimbledon final. Good luck to her in the semis on Friday!

Iraq’s Muqtada al-Sadr has cast himself as a nationalist reformer. But, according to Fanar Haddad, at the University of Copenhagen, the movement he leads is more about dominating Iraq than anything else. “In the mafia state of Iraq, al-Sadr’s ‘revolution’ against the corrupt political classes is less Eliot Ness going after Al Capone and more Michael Corleone moving against the other families,” Haddad writes in his opinion piece here.

[LISTEN: The Take looks at how close Iraq is to an intra-Shia conflict]

Amid the modernity of Doha, the skyscrapers and the malls, there’s an area – the Souq Waqif – that retains a traditional feel. Khadiza Begum shows us in this feature how a fire in 2002 led to a complete rebuild and the maze of alleyways that exists today.

Quote of the Week

“Whenever I call, you can hear the children screaming and crying in the background. I don’t know why no governments have taken action to rescue them. Is it because they’re poor people trying to make ends meet for their families?” – A family member of migrants and refugees stranded on a sinking fishing boat in the Mediterranean Sea. The relatives say three children have died, but no rescue operation has been launched. The relatives lost contact with the Lebanese and Syrians onboard on Monday night.