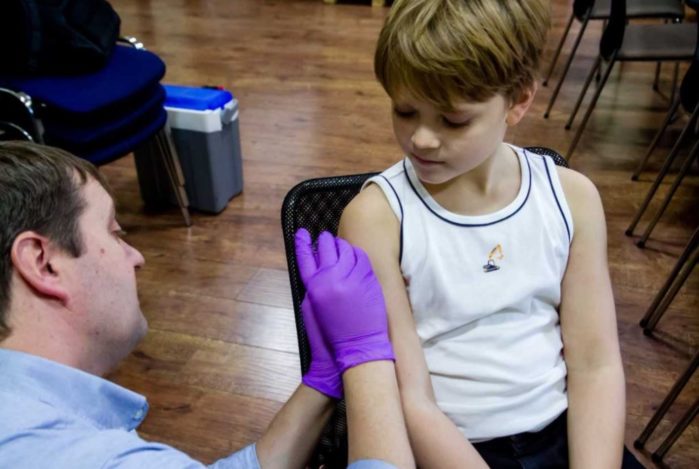 Many of the people coming to Anna Kukharuk’s private medical clinic don’t have a disease. What plagues them is doubt. But its effects are a health emergency that the doctor and hundreds of others are struggling to remedy.

Deep mistrust of vaccines in Ukraine has allowed measles, a virus which according to United Nations data kills 367 children a day worldwide, to grow into an epidemic infecting more than 58,000 people in the country of 42 million this year alone.

That has brought one of the world’s most contagious diseases to Europe – there have been recent outbreaks in Poland, Romania and Germany – and possibly beyond, to Israel and New York. International health officials are investigating whether pilgrims to a rabbi’s grave in the Ukrainian city of Uman may have carried measles, via Israel, to the United States.

Pockets of dissenters in many communities have long shunned immunization. In Ukraine, more and more parents are questioning or delaying their children’s shots. Their doubts are rooted in a weak healthcare system, corruption and mistrust of authority. Magnified by rumors on social media, the doubts have transformed the country into a weak spot in efforts to shore up global immunity against infectious diseases, public health specialists say. The World Health Organization (WHO) last year named “vaccine hesitancy” as a top 10 threat to global health.

Since 2017, measles has infected 115,000 people in Ukraine and killed 41 – 25 of them children, according to the United Nations Children’s Fund (UNICEF). Survivors can suffer long-term complications or disabilities such as blindness, deafness or brain damage.

Even so, Khukharuk says parents visiting clinics like hers are unsure whether to vaccinate: “Most of them have doubts. They are hesitant, and they can be tilted one way or the other.”

It’s a fight on many fronts. Research shows vaccines save lives, but only half of Ukraine’s population believe they work, according to a report published in June by Britain’s Wellcome Trust, based on a survey of attitudes among 140,000 people from 140 countries. Globally, 84% of those surveyed said they believed vaccines are effective, including more than 80% in the United States and the United Kingdom.

Kukharuk and other clinicians say even their medical colleagues argue vaccines weaken immunity. There is no evidence for such beliefs; decades of science show the opposite.

Online, concerns about poor-quality ingredients and accounts of children being forcibly vaccinated fuel notions that vaccines are a ploy by Big Pharma and governments to make money and control populations. In fact, most vaccines are low-margin products for drug makers.

The shunning of vaccination weakens people’s defences against deadlier diseases, such as polio, which causes paralysis and was eradicated in Europe in 2002. Two children in Ukraine were paralyzed by polio in 2015 – Europe’s first outbreak since 2010, according to the WHO. An emergency vaccination campaign contained that flare-up.

“It’s not only a concern for the children and the people of Ukraine, it’s actually a global issue,” said Lotta Sylwander, head of UNICEF in Ukraine. “Communication and the way we travel means that this affects people and children worldwide.”

Children’s artwork adorns the walls in the large, bright office of Kukharuk’s clinic, and cartoons about vaccination are shown to children in the waiting room. But Kukharuk is mainly focused on their parents.

The young doctor is part of a network of unpaid volunteers in a Ukrainian pro-vaccination campaign sponsored by charity Rotary International – many of them women, many also mothers – who put themselves forward to persuade people to get vaccinated.

On a sunny Saturday morning in a park in the center of Kiev, another doctor, Alla Pugach, enlisted the help of a team member dressed in a bear costume to educate parents and children about vaccines. The goal, Pugach said, “is to attract as many people as possible to vaccination.”

“We call these people ‘change agents’,” said Sergii Zavadskyi, the charity’s head in Ukraine. “We have a network of about 300 of them. They are trying to help parents find the truth.”

Rotary International has spent $200,000 in the country over the past four years on public health activities including campaigns about polio immunization. Its PolioPlus program is funded by donations and events organized by members and supporters.

Volunteers organize meetings to tell unvaccinated adults, parents, teachers, health workers and others about the risks of infectious diseases. In her clinic, Kukharuk directs visitors to WHO data which says vaccines save up to 3 million lives a year.

For its part, the government in Kiev says increasing vaccination coverage is a matter of national security, and it has set up a website to debunk myths about vaccination. It has long required children to produce certificates showing they have had their shots to go to school.

Earlier this month, Health Minister Zoryana Skaletska posted a selfie on the ministry’s Facebook page which showed her getting a flu jab. “We remind you, vaccination is the most effective means of prevention,” the post said.

It’s a tough sell. In 2016, only half the babies and children in Ukraine who should have been immunized against diseases such as measles, mumps, polio, tetanus and whooping cough had received these routine inoculations, according to Ukraine’s health authorities.

Immunization rates need generally be around 95% to achieve the ‘herd immunity’ that can protect whole populations, the WHO says.