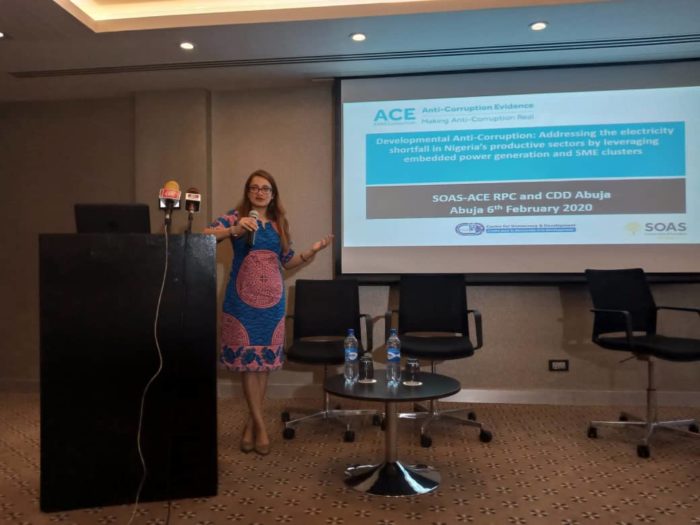 A research by SOAS University of London and the Centre for Democracy and Development has recommended that disaggregated power-generating solution can be used to lessen the problem of Small Medium Enterprises (SMEs) in power supply.

According to the research, when natural gas is used as feedstock, disaggregated power-generating solution has the capacity to sustain SMEs operations in terms of power supply.

Disaggregated power-generating solution is a solution that harnesses both hardware and software tools to identify and quantify specific sources of household energy use.

News Agency of Nigeria (NAN) reports that the research was a UK aid funded project conducted in partnership with highly experienced research and policy institutes led by SOAS University of London, under the Anti-corruption Evidence (ACE) project.

Ms Pallavi Roy, SOAS University of London, who presented the research report, said that the recommendation to disaggregate the power sector was to help SMEs operators whose limitation to achieving competitiveness was inadequate electricity supply.

Roy said that the report also recommended that SMEs should be incentivised by the government to support the recommended strategy.

She said that this recommendation became imperative because SMEs accounted for 96 per cent of businesses in Nigeria and they were most vulnerable to losses from lack of power supply.

“In spite of the privitisation of the power sector in 2010, a decade on the desired outcome has still not materialised and electricity on national grid has stayed on 4,500 megawatts.

“One reason for this is the technical inefficiency of the grid, beginning with inefficient gas supplies, inability of transmission system to deploy adequate electricity and poor collection of user tariffs by distribution companies.

“In a sector where demand is high and supply is severely constrained, there are strong perverse incentives for corrupt behaviours,’’ she observed.

Roy said that almost all respondents SMEs in Nnewi, Onitsha and Aba used diesel generators as backup and this was echoed by various other studies too.

She said many SMEs faced high costs and had been forced into corruption since compliance with regulations would affect their bottom line and this was one of the reasons growth in the sector has been affected.

She said that the inefficiencies in the sector had resulted in a growing revenue shortfall and the sector subjected to extensive government bailouts.

She said that the number of medium-sized enterprises decreased significantly from 4,670 in 2013 to 1,793 in 2017; a 61 per cent drop with power constraints listed as one of the leading constraints along with water supply.

She also said that the research suggested anti-corruption-related solutions, one for the short term and another for the long term, adding that the latter strategy included capital investment and debt restructuring.

She said the other strategy was focused on the most vulnerable segment of Nigeria’s economy such as small and medium sizes enterprises.

Prof. Jibrin Ibrahim, Senior Fellow, CDD, said that contracts and procurement were identified as key sources of corruption and that the Bureau of Public Procurement was established to curb corruption.(NAN)