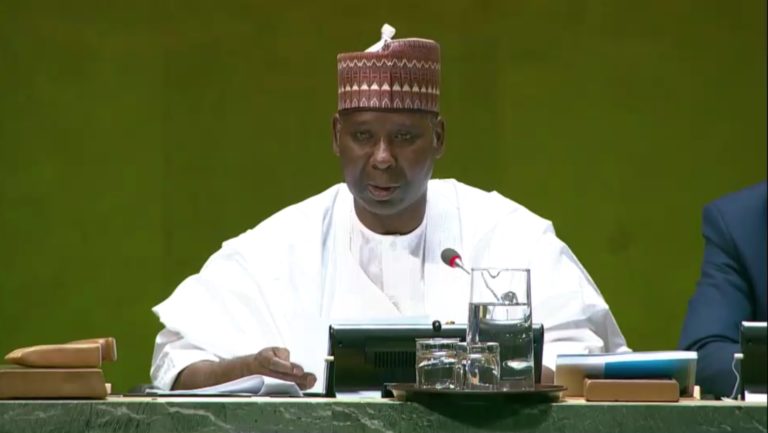 President of the United Nations General Assembly (PGA), Amb. Tijjani Muhammad-Bande, on Monday outlined his priorities for the remaining part of his tenure in 2020.

They are anchored on his vision of peace and security, quality education, zero hunger, climate action, poverty eradication, and inclusion, in line with the Sustainable Development Goals (SDGs).

These came with an implementation roadmap at an informal plenary of the Assembly in New York.

Addressing delegates, the PGA said he was “determined to galvanise partnerships in implementation of the action plan.

On peace and security, the Nigerian diplomat emphasised the need for multilateralism in international conflict resolution, an issue he promised to flag with stakeholders.

He said the Ukrainian plane tragedy resulting from the Iran-U.S. crisis underscored the need for countries to resolve their differences through diplomacy.

“The need to work harder in achieving peace and security is evident in the current tragedy, which has led to the loss of 176 lives.

“If ever diplomacy should achieve its purpose, this is one urgent area it must show its face.

“This crisis can also not be dissociated from the larger situation in the Middle East.

“It is thus critical that we find solutions to the Israel – Palestine conflict or question, as with those in Syria, Yemen, Libya and others,” he said.

The PGA told delegates he would convene an event to commemorate the second International Day of Education on Jan. 24.

He said the forum would provide an opportunity for stakeholders to cross fertilise ideas on transforming the educational system through partnership.

“Ensuring access to free and quality primary and secondary education, as well as affordable and inclusive vocational and technical education, is important.

“I will continue to reach out to you beyond the International Day of Education on how best we can continue to collaborate in achieving this,” he said.

On zero hunger, the PGA disclosed plan to host an event in February on the topic “Targeting Hunger: South-South and Triangular Cooperation for Transforming Agriculture”.

“It is my hope that member states will use this opportunity to deepen discussion on how to strengthen cooperation to achieve Zero Hunger, particularly through partnerships in the agricultural sector.

“We can end hunger and help to eradicate poverty if we deepen cooperation in modernising the agricultural sector, particularly as it concerns availability and affordability of industrial machineries, irrigation systems, high yield seedlings and access to finance.”

Turning to climate change, Muhammad-Bande said there would be an Ocean Conference featuring seven “interactive dialogues” in Lisbon, Portugal between June 2 and 6.

He stated that a preparatory meeting to be held between February 4 and 5, would determine the themes of the discussions and also provide initial inputs for a declaration to be adopted at its conclusion.

He also highlighted a Biodiversity Summit, whose preparatory process will begin on Thursday, saying “we must do our best to tackle the environmental emergencies that we currently face”.

The PGA announced he would convene a high-level dialogue in collaboration with the Secretariat of the UN Convention on Combating Desertification on June 9.

He explained that the summit would provide a platform to “review the progress made in the fight against desertification, land degradation and drought”.

On inclusion, which he described as key to the world, Muhammad-Bande noted that “exclusion has been a major source of instability in all societies”.

“There is absolutely no reason to exclude anyone – whether they are a man or a woman, youth, disabled, or because of their faith, color or where they are from.

“I will organise a High-Level Youth Plenary on March 31, 2020, in conjunction with the President of ECOSOC (Economic and Social Council).

“This will give youths an opportunity to interact among themselves as well as with other stakeholders, including member states and UN officials,” he said.

The Nigerian envoy said he was also working with the President of ECOSOC on an initiative on to promote financial integrity and curb illicit financial flows.

The PGA solicited the support of all delegates, organs of the UN and civil society organisations to advance the implementation of those priorities.

Muhammad-Bande, who is Nigeria’s Permanent Representative to the UN, holds the UNGA presidency for a one-year term on behalf of the country.

The respected career diplomat, administrator and professor of Political Science assumed office as PGA in September.(NAN)