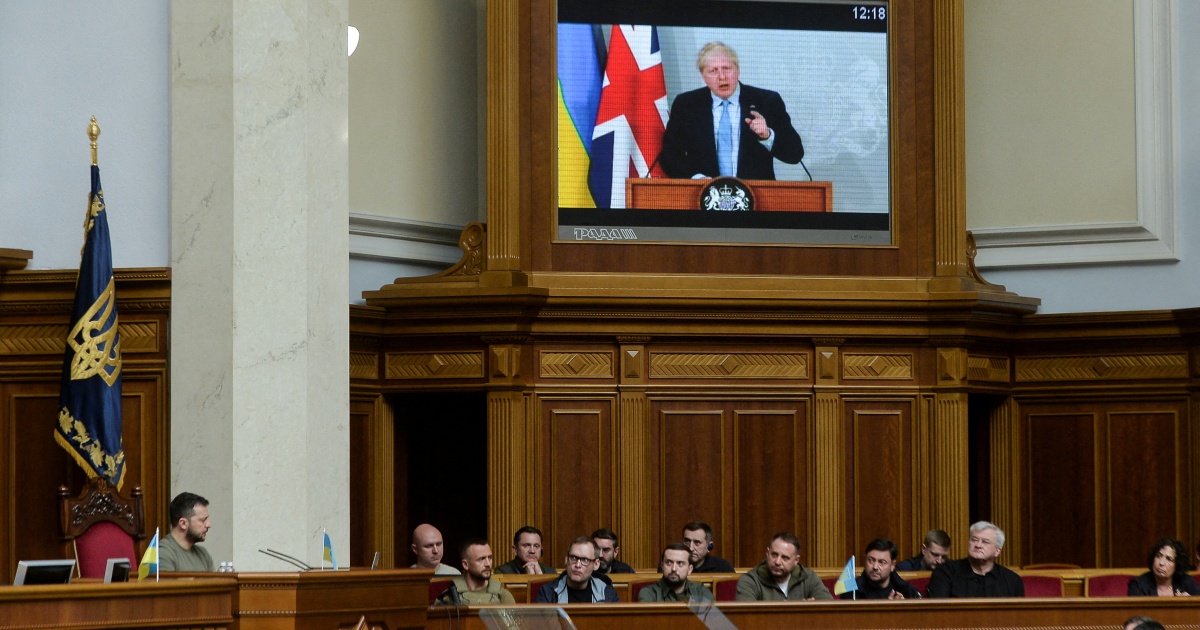 Prime Minister Boris Johnson has announced another £300m ($376m) in the United Kingdom’s military aid for Ukraine as he hailed resistance to Russia as its “finest hour” in a remote address to parliament in Kyiv.

Johnson used Tuesday’s speech delivered via video link, the first by a foreign leader to Ukraine’s Verkhovna Rada since Russia invaded on February 24, to commend Kyiv’s forces for fighting “with the energy and courage of lions”.

“This is Ukraine’s finest hour, that will be remembered and recounted for generations to come,” said Johnson, a phrase first used by the World War II-era British leader Winston Churchill in a speech in 1940.

Johnson said Ukraine’s resistance had “exploded the myth” that Russian President Vladimir Putin’s forces were invincible and “written one of the most glorious chapters in military history and in the life of your country”.

“The so-called irresistible force of Putin’s war machine has broken on the immoveable object of Ukrainian patriotism and love of country,” he added, arguing the Russian leader was “sowing the seeds of catastrophe for himself and for his country”.

The new military support, which will include electronic warfare equipment, a counter-battery radar system, GPS jamming equipment and thousands of night vision devices, is the latest defensive aid from London.

It represents a ramping up of support, after previously dispatching about £450m in military equipment to Kyiv in several stages.

Meanwhile, 13 new specialised Toyota Landcruisers are headed to Ukraine to help protect civilian officials in the country’s east and evacuate people from front-line areas, it added.

The Kremlin has criticised Western countries as they step up deliveries of military hardware, saying they risk escalating the conflict and warning Russia has the right to respond to any direct interventions.

But Johnson appeared undeterred, telling Ukrainian legislators the West would continue supplies “until we have achieved our long-term goal, which must be to fortify Ukraine so that no one will ever dare to attack you again”.

On the diplomatic front, the UK is also reopening its embassy in Kyiv. The UK government has not confirmed when the embassy will reopen, but Simmons was present in the Verkhovna Rada to hear Johnson’s speech.

The timing of the address, coming a month after Johnson met Zelenskyy in Kyiv, was questioned by some British opposition politicians, who said it was a way of boosting his ratings ahead of local elections on Thursday.

Johnson’s spokesman denied it was an election stunt or a way of distracting attention from scandals over gatherings in Downing Street during a strict COVID-19 lockdown, saying the prime minister was determined to show his support for Ukraine.