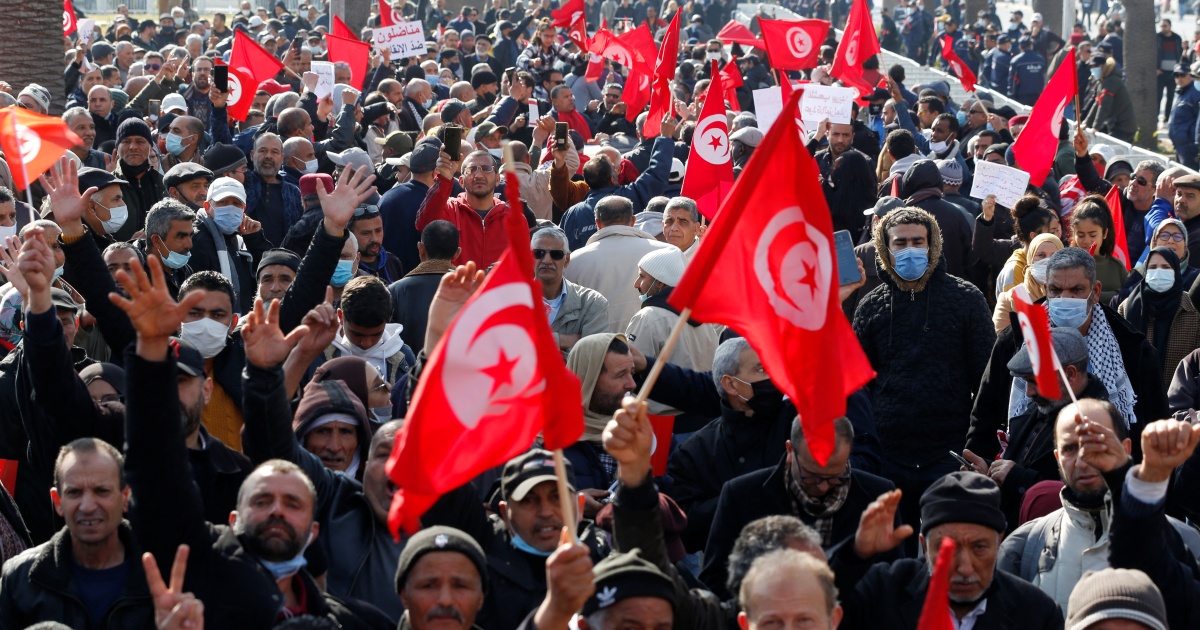 Tunis, Tunisia – As Tunisia’s political crisis rumbles on, President Kais Saied has made several moves that critics say are designed to entrench him in power and appears increasingly unwilling to compromise.

On Thursday, Saied rejected the formation of an opposition “National Salvation Front”, which has called for a national dialogue conference and a transitional government.

The opposition move appeared to be an attempt to reach out to Saied, but he told a gathering in Tunis that there was “no dialogue with those who want to target the Tunisian state”.

This comes a week after Saied replaced most of the members of the election commission (ISIE) on April 22, removing one more democratic check on the president, and leading to worries about the legitimacy of any future elections.

Tunisia’s political crisis began after Saied sacked the government, suspended parliament, and took emergency powers nine months ago; actions that were labelled a “coup” by his opponents.

Saied framed his moves as a fight against the corruption of Tunisia’s political elites, and a move from a parliamentary system, which he blames for the poor performance of the government in recent years, to a presidential system.

While Saied did receive a wide degree of popular support at the time, that has weakened following decisions that appear to reverse Tunisia’s path towards democracy following the 2011 revolution in the country.

Those moves include replacing the country’s judicial council, and rewriting the constitution, which Saied will put to a referendum in July.

The election commission decree, issued on April 22, amended the law to allow Saied to appoint four new members to the commission, while removing six members. The new body will have seven members in total, with three members of the old panel remaining in their positions.

The ISIE had been one of Tunisia’s last remaining independent state institutions.

Established in 2011, the ISIE is currently composed of nine independent members elected by parliament by a two-thirds majority, with its president appointed by parliament.

The ISIE’s current head Nabil Baffoun, who had previously insisted that the head of state could not amend the electoral law or change the panel makeup by decree, reacted to the new order with shock.

“It can be said that the commission has become the president’s body par excellence, with all seven [new] members being appointed by him, which fundamentally removes the concept of independence,” Baffoun said.

“The new panel will be biased, clearly. The people who will form it won’t have any credibility”, Ahlem Hachicha, a Tunisian political observer, told Al Jazeera. “The question of legitimacy arises in the whole process”.

While acknowledging that the election body in its previous form was imperfect, Hachicha suggested that it would have been sensible to make reforms rather than unilaterally overhauling it.

“Ten years after the revolution we had made a lot of mistakes, but at least we were on the right path and getting closer to the end of the tunnel”, Hachicha argued. “Then, we chose to give in to an autocratic authority and dismantle all that we built in a decade”, she continued.

Ennahdha, a Tunisian Islamist party, said the move was unconstitutional, and the Workers’ Party called the decision an effort to “reproduce dictatorship”. Other prominent parties, such as Afek Tounes and Hirak Tounes Al-Irada, also criticised Saied’s decision sharply.

Opposition and support for Saied

Meanwhile, the “Coalition for Tunisia” party welcomed the presidential order, and said that it was “an achievement in the path of correction to correct the law of this body and change its composition”. It also added that the electoral commission had “never been independent”.

Civil society groups, such as Mourakiboun, a national electoral observation network, have also questioned Saied’s latest moves, and the integrity of the electoral process, with the July constitutional referendum coming up, as well as legislative polls in December.

“Altering the formation of the electoral authority less than 90 days before the referendum brings into question the credibility of the whole election process and also the independence of the authority itself”, Slim Bouzid, a member of Mourakiboun’s executive office, told Al Jazeera.

Bouzid said that the new body did not include people with electoral experience, and pointed to the four-year mandate for the members of the electoral commission as evidence that it will stay in place beyond the current state of emergency.

“There’s a high chance the results of both voting appointments [the constitutional referendum and the legislative polls] won’t be accepted. That could lead to violence”, Bouzid said. “This is our biggest worry.”

Saied still retains support, with many Tunisians believing that his decisions are necessary to bring about change and an improvement in the country’s economy.

Neila Ben Rhouma, a member of the Coalition for Tunisia party, backed Saied’s new election commission, and said that they would be independent, pointing to the immunity from prosecution that they will enjoy.

“Thanks to their immunity, members of the new election panel will be able to work by the rules, and there won’t be pressure from any party,” Ben Rhouma told Al Jazeera.

If anything, Ben Rhouma believes that Saied has not acted quickly enough to change the way government and the authorities work in Tunisia.

“Kais Saied is acting slowly with his radical changes, but he’s heading in the right direction,” she said.

While many Tunisians agree with Ben Rhouma that the measures Saied has taken since July of last year have been necessary, the president has appeared to struggle to mobilise wider public support among a population increasingly preoccupied with economic hardship and soaring prices, and apathetic about his political reform plan.

But even the tacit support of a significant section of the population appears to be enough for Saied to force his plans through, leaving many of those opposed to him fearful about the country’s future.

“Transparency is over,” said Hachicha. “There won’t be democratic elections in Tunisia.”