Troops in hot chase of remnant of B/Haram terrorists – Army 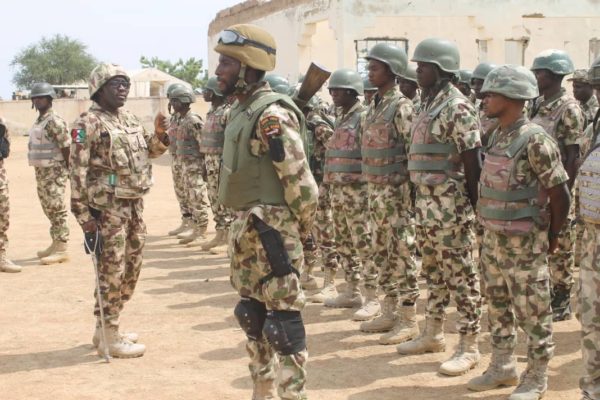 The Nigerian Army says its troops of ‘Operation Lafiya Dole’ have heightened the tempo of chase of remnants of Boko Haram/Islamic State’s West African Province (ISWAP) terrorists in the Northeast region.

The Nigerian Army Operations Media Coordinator, Col. Aminu Iliyasu, in a statement in Abuja, said that many of the terrorists were on the run.

Iliyasu disclosed that the troops had in recent times, dealt deadly blows on the terrorist elements, who laid ambush along Jakana – Mainok Road.

He added that several insurgents were neutralised while others escaped with gunshot wounds leading to capturing of two gun trucks and different calibre of weapons.

According to him, troops of 121 Task Force Battalion deployed at Pulka in Gwoza Local Government Area of Borno, had on Jan. 27 launched a successful ambush against the terrorists mounted on motorcycles at Sabon Garin Kirawa.

He added that the encounter led to the killing of two of the insurgents and capturing of motorcycles as well as a number of weapons and ammunition.

“In the same vein, on Jan. 28, troops of 159 Task Force Battalion deployed at Gubio in conjunction with elements of the Civilian JTF neutralised two of the insurgents forcing others to retreat in disarray with gunshot wounds.

“Notwithstanding, the troops captured one AK 47 Rifle, 4 AK 47 Rifle magazines and 46 rounds of 7.62mm Special ammunition.

“Regrettably, one soldier and one member of the Civilian Joint Task Force were wounded in action.

“However, the wounded were immediately moved to a military medical facility and are currently responding positively to treatment,” he said.

Iliyasu disclosed that the troops had continued to record successes across the theatre of operation noble of which was the arrest of one Modu Gana, a high profile Boko Haram spy and logistics supplier at Bulunkutu Ngomari in Jere local government area.

He explained that preliminary investigation revealed series of communication between the suspect and an ISWAP Commander – Bukar Fatumani requesting him to conduct surveillance on troops’ location at Benisheik, Jakana, Auno and Njimtilo.

According to him, the Explosive Ordnance Disposal Team had recently recovered and detonated an Improvised Explosive Device planted by the insurgents along Konduga- Kawuri Road, Garin Giwa – Cross Kauwa Road and Dikwa – Marte road.

The spokesperson said that a lot of successes had been recorded in the Northwestern states against bandits, armed robbers and kidnappers in the past weeks.

“The Chief of Army Staff, Lt.-Gen. Tukur Buratai wishes to reassure the general public of the resolve of the Nigerian army to continue to execute its constitutional mandate professionally and responsively for a better and secured Nigeria.

“He also thanks all well-meaning Nigerians for their continued support, goodwill and understanding toward officers and men of the Nigerian Army. (NAN)