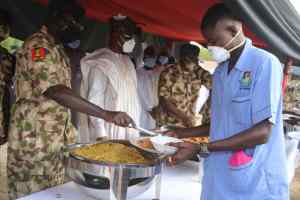 By Hamza Suleiman
The Nigerian Army said it had eliminated over 1,015 Boko Haram terrorists in different encounters with the insurgents in the Northeast between April 4 till date.

The Chief of Army Staff (COAS), Lt.-Gen. Tukur Buratai, who disclosed this when he hosted the troops of Operation Lafiya Dole to Eid-El-Fitr luncheon at Military Control and Command Centre in Maiduguri.

Buratai said that the insurgents were neutrialised since his arrival in the Theatre to lead the troops under Operation KANTANA JIMLA within the period under review.

He explained that the Artillary’s airstrike and blockage operations conducted by troops at the Tumbuktu Triangles around Sambisa has been greatly successful.

He said that the troops succeeded in dislodging major camps of the terrorists at Mungusum, Gajirin, Talala, Buk, and Malumti among others under the operation.

“Hundreds of terrorist fighters have been neutrialised in this different camps as confirmed by the force and captured terrorists while trying to escape the operations.

“Many more hundreds have been injured and are hiding in the forest with serious wounds.

“This explains why the terrorist have resulted to desperate attacks on towns and villages such as Babangida, Dapchi searching for medical supplies and other logistics to treat their injured colleagues, who are dying like fowl in the forest.

“Overall, since my arrival here in the Northeast on the 4th of April this year, you gallant troops of operation Lafiya Dole have neutrialised over 1,015 Boko Haram terrorists.

“Also, you have impressively maintained the blockage of Boko Haram logistics supply chains and freedom of movement within the Tumbuktu Triangles.

“In a light manner, the Nigerian army intelligence core has impressively been organised and its operations has greatly improved.

He said the Chief of Military Intelligence Team, through covert Operations have arrested 84 Boko Haram/ISWAP logistics suppliers, informants and curriers.

According to him, this has greatly disrupted their logistics supply chain and communication network, thereby tightening the blockage around them.

“It is also gratifying to note that officers and men of the Nigerian army, fighting in close support with the combatant personnel of the Nigeria Navy Special Force Services and the gallant pilots of the Nigerian Airforce, have consistently disrupted the terrorists moves and done well in neutrialising them,” he said.

The COAS said it had also sustained some casualties while others sustained injuries while executing the operations.

“We pray for the departed souls even as you continue to look after injured ones to the best available standard,” he said.

“We are restructuring our forces to enable them fight better within the dictates of the new asymetric warfare we are encountering today.

“In this regards, in the four Special Forces Command, we have trained Special Brigades and Special Forces Battalions, which have been established. Two of these battalions recently completed the special forces training and have been inducted into this Theatre.

“It is expected that the effects of their specialised training and modes of operations would be felt across the Theatre in the days to come.”

Buratai lauded President Muhammadu Buhari, troops of Operation Lafiya Dole, Governors of Yobe and Borno states as well as the people of Northeast for their unflinching support.

“I commend the support and sacrifices of each and every one of us, especially those who have paid the supreme sacrifice. I charged you all never to allow the sacrifices of our fallen heroes to be in vain,” he said.

In his remarks, Gov. Babagana Zulum, acknowledged the tremendous success recorded by the Nigerian military during the last two months.

“I want to express our appreciation to those that are here and to the COAS, and other high ranking military officers for the enormous support that you have been rendering toward protecting the lives and property of the displaced communities of Borno state.”

The governor noted that the security architecture has to be motivated for greater efficiency and productivity, and pledged his administration commitment toward supporting the military to succeed in the counter terrorism campaign.