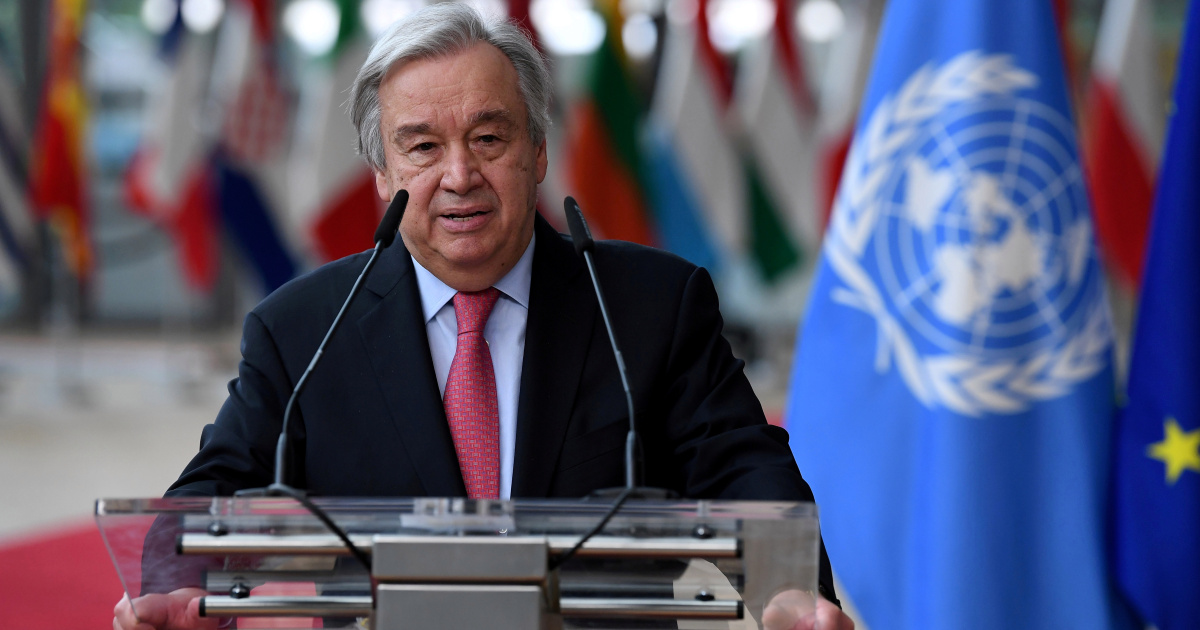 United Nations Secretary-General Antonio Guterres has called on the Taliban to immediately halt its offensive in Afghanistan, warning that the country “is spinning out of control”.

“The message from the international community to those on the warpath must be clear: seizing power through military force is a losing proposition. That can only lead to prolonged civil war or to the complete isolation of Afghanistan,” Guterres told reporters on Friday.

Guterres called on all parties to do more to protect civilians. He also said he was “deeply disturbed by early indications that the Taliban are imposing severe restrictions on human rights in the areas under their control, particularly targeting women and journalists”.

“It is particularly horrifying and heartbreaking to see reports of the hard-won rights of Afghan girls and women being ripped away from them,” he said.

The UN is evaluating the security situation in Afghanistan on “an hour-by-hour basis” and moving some staff to the capital Kabul, but is not evacuating anyone from the country, the UN spokesman said earlier on Friday.

Afghanistan is spinning out of control. Every day, the conflict is taking a bigger toll on civilians, especially women & children.

I remind all parties of their obligation to protect civilians & I call on the Taliban to immediately end the offensive & return to the peace table.

The UN chief’s plea came as the armed group seized the country’s second and third biggest cities, Herat in the west and Kandahar in the south, on Friday as resistance from government’s forces crumbled leaving residents in disbelief and stoking major fears that an assault on the capital Kabul could be just days away.

“They literally sold us out, there was no government resistance,” one female resident from Kandahar told Al Jazeera, fighting back tears. “I never imagined that Kandahar would be taken so easily,” she added.

Witnesses in Herat and Kandahar, told Al Jazeera that members of the armed group had started to search residents’ homes – looking for people close to the government and also seizing guns and vehicles.

Ismail Khan, one of the highest-profile commanders fighting for the Afghan government in Herat was captured by the Taliban on Friday. According to Al Jazeera’s diplomatic editor James Bays, Khan was boarded on a plane to Kabul to deliver a message from the armed group to senior figures in Kabul.

“The suggestion is that they want to avoid a battle in the capital city and the Taliban have some suggestions on how to avoid such a battle,” Bays said.

So far at least half of the nation’s 34 provinces have fallen into the hands of the Taliban since August 6, which means it now controls more than two-thirds of the country.

The Western-backed government in Kabul still holds a smattering of provinces in the centre and east, as well as the northern city of Mazar-i-Sharif.

While Kabul is not directly under threat yet, a source speaking to Al Jazeera from the province of Logar, some 80km (50 miles) from the capital, said intense fighting continues in the province.

With security rapidly deteriorating, the United States planned to send in 3,000 soldiers to help evacuate some personnel from the US embassy in Kabul. The United Kingdom and Canada are also sending forces to aid their evacuations. Denmark said it will temporarily close its embassy, while Germany is reducing its embassy staff to the “absolute minimum”.

Hundreds of thousands of Afghans have fled their homes amid fears the Taliban will return the country to the sort of brutal, repressive rule it imposed when it was last in power at the turn of the millennium.

At that time, the group all but eliminated women’s rights and conducted public executions as it imposed an unsparing version of Islamic law. An early sign of such tactics came in Herat, where Taliban fighters paraded two alleged looters through the streets on Friday with black makeup smeared on their faces.

There are also concerns that the fighting could plunge the country into civil war, which is what happened after the Soviets withdrew in 1989.

The UN refugee agency said nearly 250,000 Afghans have been forced to flee their homes since the end of May, and 80 percent of those displaced are women and children. In all, the agency said, some 400,000 civilians have been displaced since the beginning of the year, joining millions who have fled previous rounds of fighting in recent decades.

The onslaught represents a stunning collapse of Afghan forces after the US spent nearly 20 years and $830bn trying to establish a functioning state.

US forces toppled the Taliban in the wake of the September 11 attacks of 2001, which al-Qaeda planned and executed while being sheltered by the Taliban government.