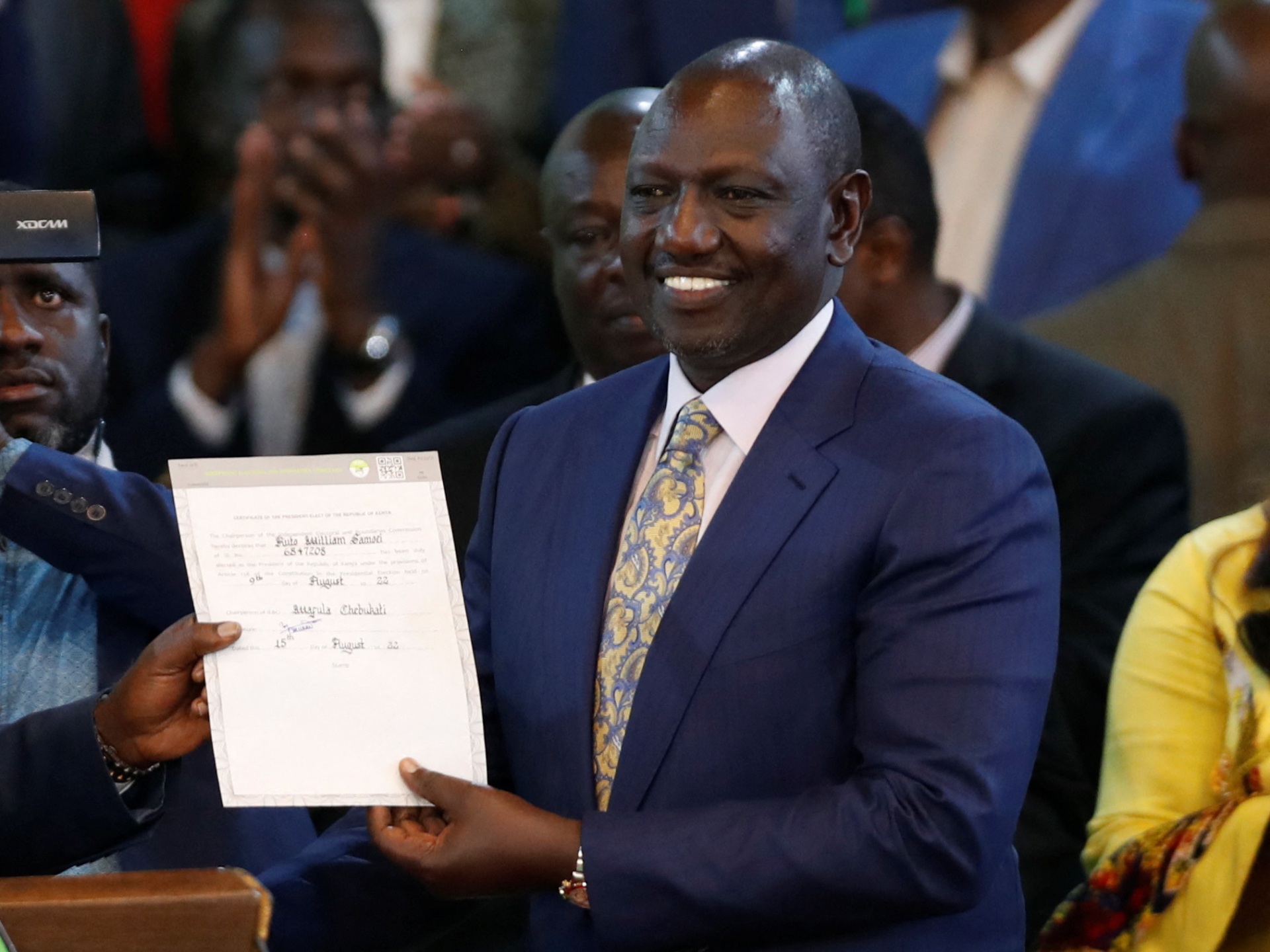 A police spokesperson said the stadium was full by dawn and urged the public to watch Ruto’s inauguration from their homes.

Several people have been injured as crowds tried to force their way into the stadium where Kenya’s president-elect William Ruto is to be sworn in, according to local media reports.

Television footage showed hundreds of people scaling a wall to gain access to the 60,000-seat Kasarani stadium in Nairobi, which was packed with spectators before dawn on Tuesday.

Ruto supporters dressed in his party’s colours of yellow and green, dancing and waving miniature national flags as a band played music from the podium.

But dozens of people were seen falling on top of each other at one entrance gate, while first aid responders carried people to a waiting ambulance.

Police spokesman Bruno Shioso said the stadium was filled to capacity at 5am (02:00 GMT) and urged Kenyans to follow the proceedings from home.

“In anticipation of being part of history, Kenyans have thronged the venue in large numbers,” Shioso said in a statement.

“To avoid logistical challenges, this is to request the public to make alternative arrangements to view the proceedings, especially from the comfort of their homes.”

Ruto is due to take the oath of office by 2pm (11:00 GMT) on Tuesday, five weeks to the day since the August 9 election that saw him clinch a narrow win over his rival Raila Odinga.

Ruto – a gifted orator believed to keep long working hours – will face a host of challenges when he takes over from Uhuru Kenyatta, including a surge in food and fuel prices, high unemployment and rising public debt.

“He is our fellow youth! I know he will bring us more opportunity,” said dancer Juma Dominic as he and his troupe warmed up before performing for the crowd.

Ruto has served as Kenyatta’s deputy since 2013, but they fell out after the 2017 election. Kenyatta backed opposition leader Odinga after a 2018 truce, to succeed him in the August election and denounced Ruto as unfit for office.

“Mr president-elect, as you walk the path to your inauguration and beyond, you will be president not just for those who voted for you but for all Kenyans,” Kenyatta said in an address on Monday evening, in which he wished Ruto well.

Kenya is a key Western ally in an unstable region and East Africa’s most wealthy and influential nation. It hosts the regional headquarters of many global companies and organisations.

Odinga had filed a court challenge accusing Ruto of cheating his way to victory but the Supreme Court swept aside his petition alongside several others. It was the fifth time that Odinga, 77, had stood for election and the first time for his latest opponent.

Odinga accepted the court’s decision, helping avoid the kind of violent protests that marred the elections he lost in 2007 and 2017.

But he said on Monday, however, that he would not attend Ruto’s inauguration and that he did not believe the election had been free and fair.

Ruto, a 55-year-old former roadside chicken seller who is now a wealthy businessman, portrayed himself as an underdog “hustler” battling the elite during the campaign. Odinga and Kenyatta are the sons of the nation’s first vice president and president respectively.

That message resonated with chronically underemployed youths and families squeezed by poverty and rampant corruption, which Kenyatta publicly acknowledged he was unable to rein in.

Members of Ruto’s team have also faced accusations of corruption.

In July, a court ordered Gachagua to repay 202 million shillings ($1.7m) which it determined were the proceeds of corruption. Gachagua and Ruto dismissed the judgement as politically motivated.