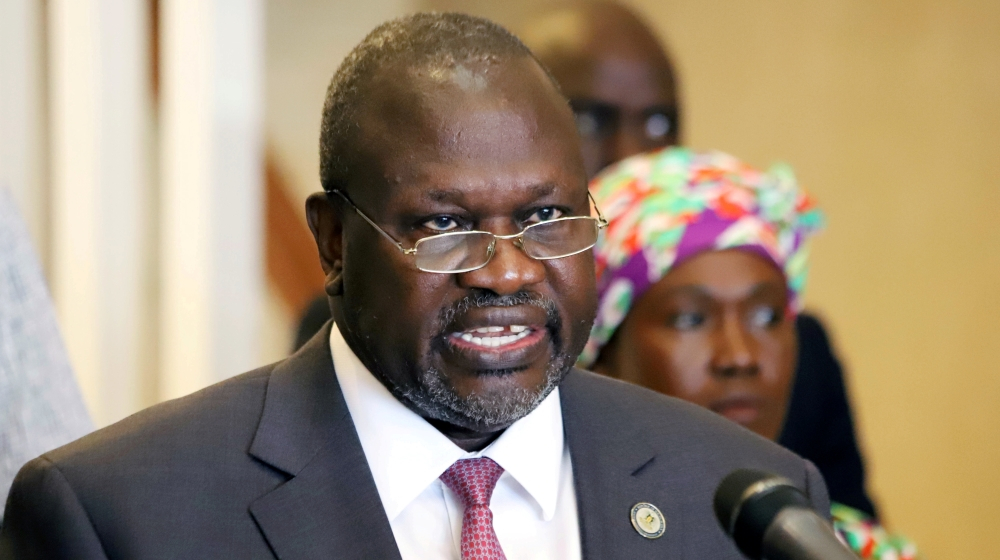 Machar was deposed following a three-day gathering of senior leaders in the country’s far north, the party’s military wing said.

South Sudan’s Vice President Riek Machar has been deposed as head of his party and its armed forces, rival military leaders said on Wednesday.

Machar played a major role in pushing his partner, President Salva Kiir, to a peace deal in 2018 and in the subsequent formation of a unity government following years of civil war.

Machar was deposed following a three-day gathering in the country’s far north of senior leaders from the Sudan People’s Liberation Movement-in-Opposition (SPLM-IO), said the party’s military wing, the SPLM/A-IO.

Its chief of staff, First Lieutenant General Simon Gatwech Dual, was declared interim leader of the opposition movement that governs the troubled country in a shaky alliance with former enemies.

The military wing said Machar had “completely failed” to show leadership and greatly weakened the party’s position in the post-war coalition government formed between the warring sides in early 2020.

Machar had engaged in a years-long “policy of divide and rule” and favoured nepotism over unity or advancing his party’s cause, according to a statement signed by the SPLM/A-IO military leadership and dated August 3.

“As a result, the meeting saw there was no option rather than to come up with the decision and finally prompted to declare the denouncement of Dr Riek Machar Teny Dhurgon from the chairmanship of the SPLM/A-IO,” the statement said.

Machar’s wife Angelina Teny serves as defence minister. There was no immediate response from Machar.

The ouster of Machar comes as South Sudan faces economic disaster and its worst hunger crisis since independence, with tens of thousands of people enduring famine-like conditions in the world’s youngest nation.

Already, there are calls for a peaceful public uprising to topple the current regime and end the chronic political and economic crisis.

South Sudan gained independence from Sudan in 2011 but descended into fighting two years later when forces loyal to Kiir and Machar clashed in the capital.

That sparked the massacre of hundreds of civilians in Juba from Machar’s Nuer ethnic group and a spiral of brutal ethnic violence and revenge killings.

In 2018, after a string of failed peace accords and violated ceasefires, a fresh truce paused the fighting.

Under that arrangement, Machar entered another unity government as deputy to Kiir in February 2020.