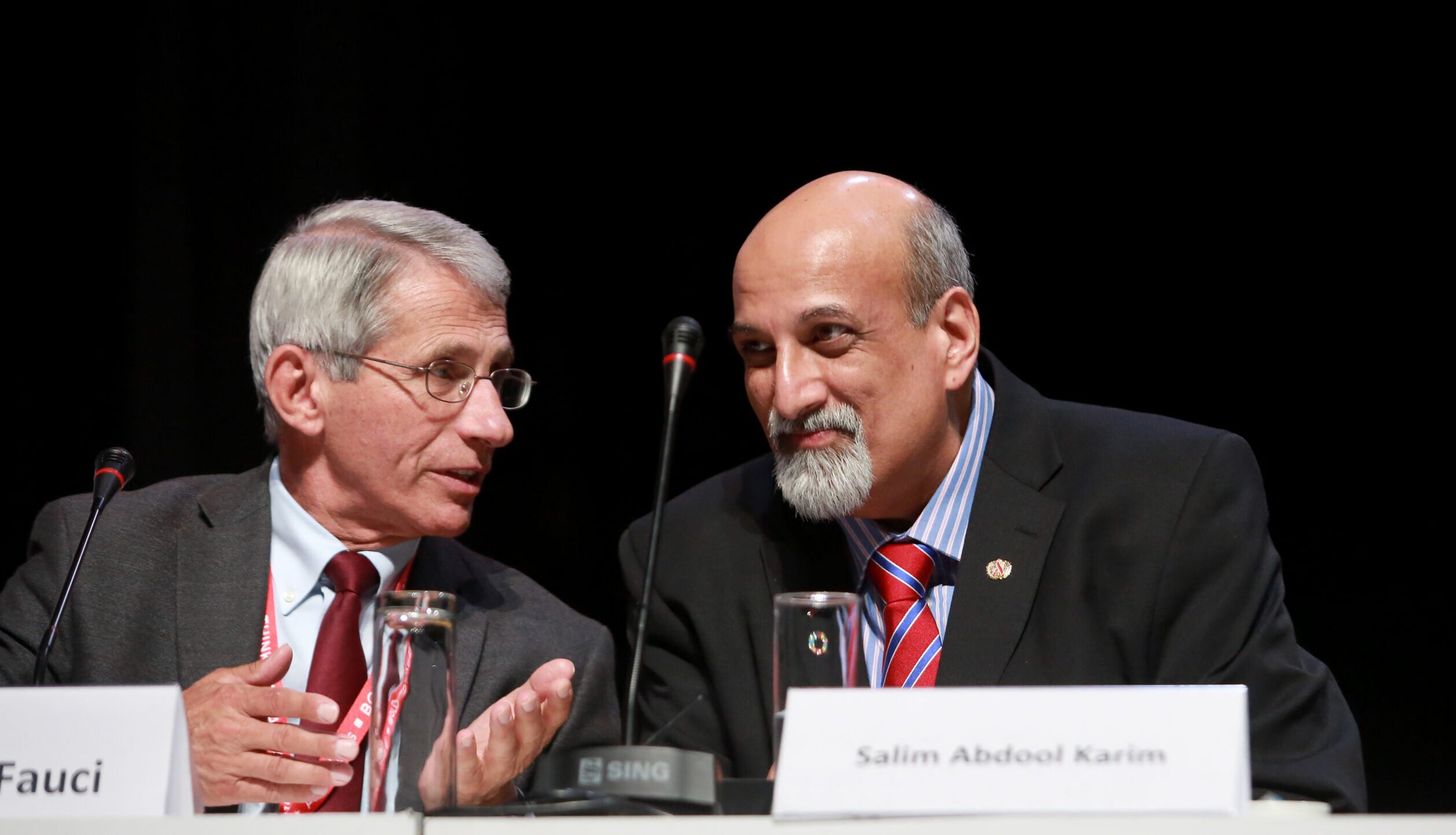 In South Africa the Covid-19 rollout has been gathering pace after many delays. The start of the vaccine rollout followed the end of Professor Salim Abdool Karim’s year at the end of March as the lead scientist in the country on the Covid-19 pandemic.

While he will still be in an advisory role on Covid-19 in the continent, Abdool Karim has gone back to focus on HIV, which still has a very high prevalence in South Africa.

“HIV is a serious disease, and it remains serious. It’s just now that we have treatment for it, we don’t look at it in the same way,” he says. Abdool Karim, whose nickname is “Slim” (a play on the Afrikaans word for “clever”), has been working at developing a vaccine for HIV/Aids for 30 years now.

There is also no HIV vaccine as yet. “It’s a very difficult thing to do,” he says, and it’s different to a Covid-19 vaccine.

The HIV pandemic, which started in the early 1980s, has caused a lot more deaths than in Covid-19 thus far, he says. Officially 4.2 million people have died with Covid-19, with the upper estimates 10 to 12 million deaths.

“To date we had somewhere in the region of 40 million people dying from HIV,” he says.

“We are already using mRNA technologies to make HIV vaccines. So Covid will have those spin-offs for HIV. We are learning a lot about the immune system with Covid that’s helping us better understand HIV as well,” Abdool Karim says.

When the Covid-19 pandemic started, resources used for HIV were pivoted to help in the fight against Covid-19. For example, the machines used for PCR Covid-19 tests are also standard technology for HIV tests.

South Africa’s large contingent of health care workers – about 70 000 – going from house to house to monitor those with HIV, were repurposed to initially help with Covid-19 testing and vaccine registrations.

There are negative effects too. Studies conducted in South Africa and England show that the risk of dying from Covid-19 among people with HIV was double that of the general population, according to  UN Aids.

Early stages of the pandemic

Abdool Karim was on a hiking trip with his family in the December holidays in 2019 when a news alert came through on his iPhone about a pneumonia outbreak in China.

By 10 January a colleague excitedly showed him the virus sequence as published on Twitter. A few days later the China Centre for Disease Control and Prevention announced there was evidence of human-to-human transmission of this novel coronavirus.

“When I saw this announcement I felt like we needed to do something, and in early February I called my team and said ‘it looks like it’s going to spread and we need to be prepared’,” he says. At the Centre for the AIDS Programme of Research in Durban, KwaZulu-Natal, where he works, a partition came down in the lab with one half of it still devoted to HIV work and the other half to Covid-19 work.

Getting the tests done

The lab ordered test kits and started testing, but in mid-February there were still no cases in South Africa. “Nobody was positive,” he says.

About two to three weeks later, the National Institute for Communicable Diseases announced the first case. The patient happened to be in Howick, less than an hour’s drive from Durban. “And then started to pick up positives,” he says.

The first outbreak was in the private Netcare St Augustine’s Hospital, in Durban, where Abdool Karim and his team divided the institution into a green, orange and red zone. “We used that to create protocols for our country to limit the spread in the hospital,” he says. These protocols are still used.

Soon the then health minister Zweli Mkhize called a meeting to ask scientists for advice and he announced that Abdool Karim, to his surprise, would be chair of government’s ministerial advisory committee on Covid-19.

“In taking on the task it became clearer to me that there were a lot of things we just didn’t know. It became very difficult when people were asking for explanations and justifications for drastic steps being taken. We didn’t have any real scientific rationale. We were largely basing it on our Chinese colleagues,” he says.

Sticking to the science

South Africa’s lockdown was one of the harshest in the world, with a ban on alcohol and cigarette sales, and on movement. Karim, who was expected to communicate the rationale behind a lot of these measures, says he was fortunate that more than 80 percent of the committee’s advisories were implemented by government.

He decided early on to trust in the science when communicating the Covid-19 message to South Africans. Many were distrustful that the virus even existed or that the measures were the correct ones, although the compliance with measures like mask-wearing in public spaces was fairly good.

“Everybody had the same problems,” Abdool Karim says. “In every country there are two groups of scientists: those focusing on solutions and those who criticise everybody.” He also says it’s in the nature of academics to disagree.

He says his task is to provide the evidence and the data and then to step back for the politicians. “The big issue for me is always to try to ensure that I’m not seen as the person making the decisions,” he says. “I’m not accountable to anybody. I’m not elected by anybody. I’m only accountable to my conscience. I’ve always ensured that I give the best advice I can. I leave it to the politicians to decide.”

South Africa, together with the rest of Africa, prepared for a Covid-19 “catastrophe” after an article by the London School of Hygiene and suggested the pandemic would be so bad on the continent that people would be dying on the streets. “It was unlikely to be the case, but we had to prepare for it. When the first wave came it was a surprise,” he says.

Early lockdowns and the youth bulge in Africa meant scenes of overrun hospitals like in Italy didn’t play out here. Subsequent waves and the slow roll-out of vaccines on the continent relative to the rest of the world now mean that the continent is facing a higher death rate.

Exactly one year after he was appointed on the ministerial advisory committee, Abdool Karim stepped down to go back to his HIV/Aids work. He’s “unperturbed” by any comparisons with Doctor Anthony Fauci, chief medical advisor to United States President Joe Biden, with whom he shared the John Maddox Prize in December 2020 in recognition for their exemplary work as government advisors on health and communicating the Covid-19 science. “I hold Doctor Fauci in high regard,” he says.

“Both of us have political situations, his more difficult than mine.” Abdool Karim says the resistance Fauci faced under former president Donald Trump was similar to the pushback faced by scientists and activists from South Africa’s leadership in the 1990s and early 2000s about HIV. “It was a bit of a deja vu for us to watch what he was going through,” he says.

Fauci is a man of great integrity, he adds, but as an accomplished scientist Abdool Karim also wants recognition for the unique work he’s doing on the continent. “I’m my own person,” he says.