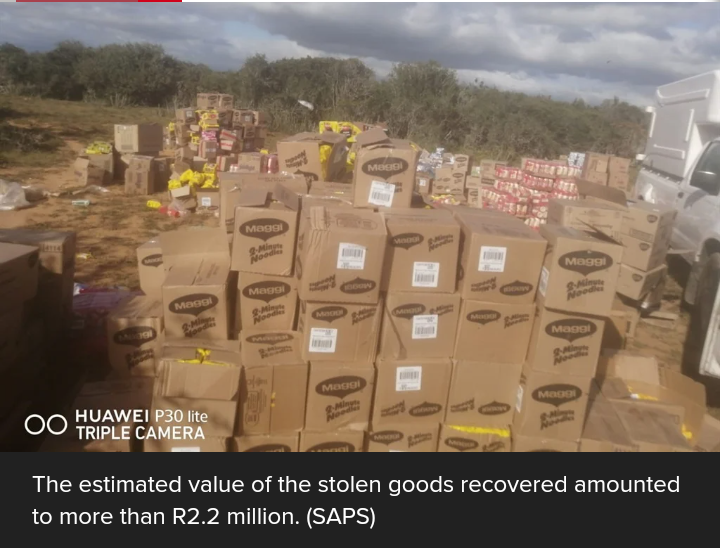 Seven people have been arrested in connection with an Eastern Cape truck hijacking in which goods worth R2.2 million were stolen.

The truck was transporting groceries on the N2 in Gqeberha and was en route to Oudtshoorn on Wednesday at about 03:10 when a white bakkie suddenly overtook the truck. The bakkie’s passenger pointed a firearm at the truck driver and ordered him to pull off the road, said police spokesperson Captain Gerda Swart.

“The suspects then took control [of] the truck, and the two victims were ordered to climb into the Nissan NP200 bakkie and were later dropped off in Motherwell,” said Swart.

After the hijacking, the security company monitoring the truck noticed the truck was not travelling as scheduled. The police were called, and the truck was found abandoned on the R75 outside Kariega at about 07:30.

“A large quantity of the grocery items were recovered at 09:00 on a farm close to the R75 near Kariega. Two vehicles – a VW Caddy and a Nissan NP300 vehicle – were also found, with some of the stolen property already loaded into the vehicles. The male driver, 34, of the VW Caddy and a second male suspect, 31, were arrested on the scene on charges ranging from hijacking to possession of suspected stolen property,” said Swart.

An extensive search in the area was conducted, and five more people, aged 29 to 36, were “found in the bushes and arrested”, police added.

All seven suspects are due to appear in the Kariega Magistrate’s Court on Friday.