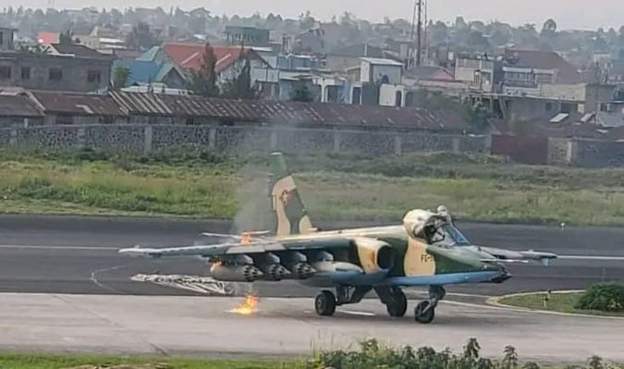 The Rwandan government says “defensive measures were taken” on a Democratic Republic of Congo fighter jet that “violated” its airspace on Tuesday evening.

Images shared on social media show a military plane being shot at while flying at a low altitude between the towns of Goma in DR Congo and Gisenyi in Rwanda.

Other images show the damaged plane – a Soviet Union-made Sukhoi-25 – being cooled down with water at Goma airport.

In a statement, DR Congo’s information ministry condemned the incident and denied that its jet had flown over Rwandan airspace.

It said the government “does not intend to let this [incident] go” and had the “legitimate right” to defend itself.

“The government considers this umpteenth attack by Rwanda as a deliberate action of aggression that is equivalent to an act of war,” the ministry noted.

Rwanda said this was the third incident involving a Congolese fighter jet on its airspace and asked its neighbour “to stop this aggression”.

The latest incident adds to the tensions between the two neighbours.