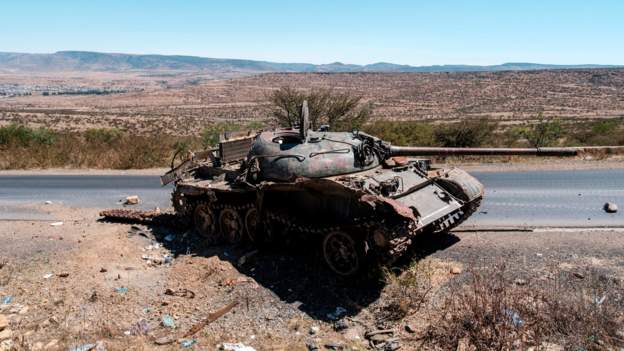 Forces in the Tigray region of Ethiopia have accused the government and its allies from neighbouring Eritrea of launching “massive offensives” in the north-west of the region.

A day earlier, the Ethiopian government said the Tigrayans were expanding the fighting along the country’s borders with Sudan.

There have been international calls for an end to the renewed violence.

Fighting in Ethiopia has spread to several fronts since a five-month humanitarian ceasefire was shattered a week ago.

A top official for the Tigrayan forces said on Twitter that new offensives have been launched against them from four different directions.

It’s not possible to verify these claims and the government in Addis Ababa has not commented.

There’s growing alarm at the resumption of violence – the US Secretary of State Antony Blinken said Washington was “deeply concerned”.

Both sides say they would welcome a peaceful resolution to Ethiopia’s civil war but that hasn’t stopped the guns from firing.

And the UN says children are among the victims – when villages were shelled in Afar, Tigray’s eastern neighbour.