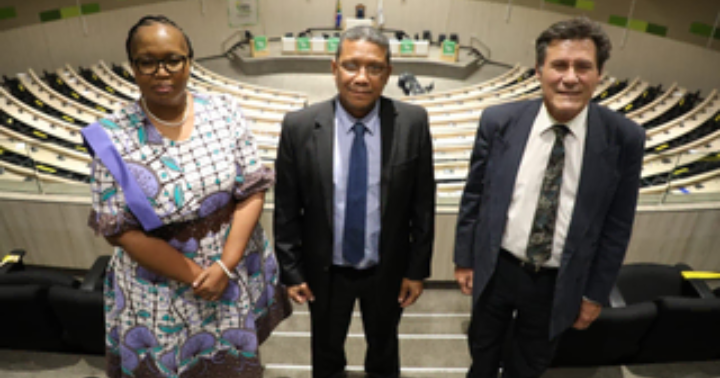 Re-elected Tshwane mayor Randall Williams has vowed to pursue a coalition government in the capital city, saying such an arrangement is good for stability and service delivery.

Speaking to the Pretoria News after he retained his position in a clean sweep of the council leadership positions by his party, the DA, during the inaugural council seating yesterday, Williams said he would do everything in his power to avoid conditions which led to the collapse of a DA-led coalition in Joburg.https://33a1ed016bac11a2d57cda9f0d74db48.safeframe.googlesyndication.com/safeframe/1-0-38/html/container.html

“Over the last two days, we have seen a wave of change wash over the major metropolitans in Gauteng as political parties came together to stand behind DA mayors. This comes with an immense amount of responsibility, but it is also a moment where politically we must take the time to humble ourselves. For humility is what we will need as we seek to take the City of Tshwane forward,” Williams said.

He added that as political differences were normal and expected in competitive democracies, “we should embrace these occasions to interrogate and scrutinise political decisions”.

“However, we should not let such occasions derail the work of the administration or lead to instability in our city. In order for Tshwane to function optimally, we need to create an environment in this chamber that is conducive towards enhancing efficiency and effectiveness within the administration. To do that requires ensuring we have sound governance processes in place and that we create a culture of accountability and transparency,” he added.

Earlier, in a continuation of a DA clean sweep which started with the shock election of Tania Campbell as Ekurhuleni mayor, followed by the takeover of Joburg by DA mayor Mpho Phalatse, Williams had retained control of Tshwane unopposed. Another DA candidate Katlego Mathebe retained her position as speaker of council, while her colleague Christiaan van den Heever was elected as chief whip. The trio were elected unopposed after the ANC caucus in Tshwane opted not to field candidates for the positions of the mayor, the chief whip and the speaker of council. People who watched the meeting had expected that ANC mayoral candidate Frans Boshielo would be put up for election.

DA leader in Gauteng Solly Msimanga told the Pretoria News before that proceedings that based on what transpired in Johannesburg and Ekurhuleni, “it is clear we will take the speaker, the mayor and the chief whip positions”.

He denied the DA was arrogant, saying it was in fact willing to work well with other political parties where possible to ensure the people of Tshwane received the services they deserved.

However, the inaugural council meeting was never going to end without a bit of tension and confrontation. EFF leader in Tshwane Obakeng Ramabodu accused Freedom Front Plus councillors of holding other councillors to ransom, and delaying proceedings when they demanded to be sworn in in Afrikaans rather than in English.

This was also unimpressive to acting city manager Mmaseabata Mutlaneng, who presided over proceedings before Mathebe resumed her position. The councillors called for Mashaba to stop what he was doing and leave chambers because he was disturbing the swearing in process. Mutlaneng called security and members of the Tshwane Metro Police Department to intervene.

Mashaba told the media that Action SA was there to vote for the DA for the position of speaker, chief whip and mayor, just to ensure that power did not return to the hands of the ANC.

However, he said the DA must not be confused and think their support was a donation because they would be held accountable to ensure they delivered services in the interests of all citizens.