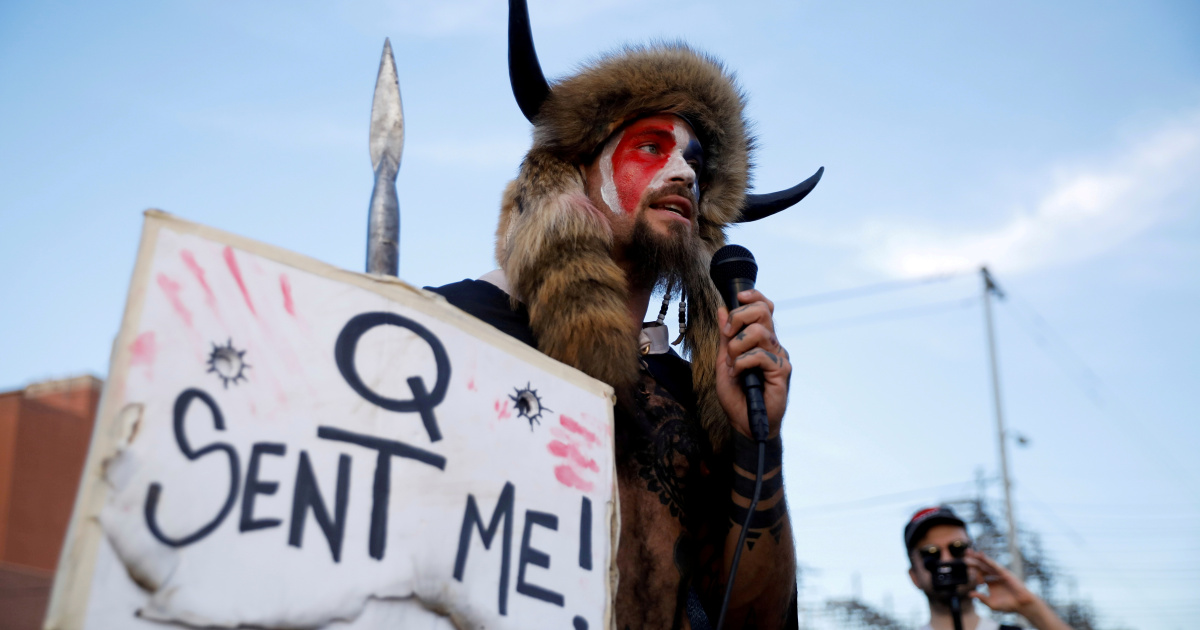 Jacob Chansley could face up to 51 months in prison for his role in the attack on the US Capitol.

A man from the US state of Arizona who sported face paint, no shirt and a furry hat with horns when he joined the mob that stormed the US Capitol on January 6 pleaded guilty on Friday to a felony charge carrying a prison sentence of up to 20 years.

Jacob Chansley, 33, who was widely photographed in the Senate chamber with a flagpole topped with a spear, could face 41 to 51 months in prison under sentencing guidelines, a prosecutor said.

Chansley wants to be released from jail while he awaits sentencing.

The man who called himself the “QAnon Shaman” had been a subscriber to QAnon, the far-right conspiracy theory blamed for fuelling Donald Trump’s supporters who tried to halt Congress’s certification of results of the 2020 election won by Joe Biden.

He had been jailed for nearly eight months before the plea.

His defence lawyer said on Friday Chansley was disappointed that Trump did not pardon him.

Before Friday’s court proceeding, Chansley was found by a judge to be mentally competent after having been transferred to a Colorado facility for a mental health evaluation. His lawyer Albert Watkins said the solitary confinement that Chansley faced for most of his time in jail has had an adverse effect on his mental health and that his time in Colorado helped him regain his sharpness.

Chansley had been diagnosed by prison officials with transient schizophrenia, bipolar disorder, depression and anxiety.

“I am very appreciative for the court’s willingness to have my mental vulnerabilities examined,” Chansley said before pleading guilty to a charge of obstructing an official proceeding.

US District Judge Royce Lamberth is considering Chansley’s request to be released from jail while he awaits sentencing, which is set for November 17.

Chansley was among the first wave of pro-Trump rioters to force its way into the Capitol building. He yelled into a bullhorn as officers tried to control the crowd, posed for photos, and while inside the Senate chamber he profanely referred to then-Vice President Mike Pence as a traitor. He wrote a note to Pence saying, “It’s only a matter of time, justice is coming.”

In November 2020, he wrote a social media post in which he promoted hangings for traitors.

The image of Chansley with his face painted like the American flag, wearing a bear skin headdress and looking as if he were howling was one of the first striking images to emerge from the riot.

Nearly 600 people have been arrested over the attack on the Capitol where Congress was meeting to certify Joe Biden’s November victory over Trump. Earlier, Trump had given a fiery speech falsely claiming his defeat was the result of fraud. Fifty others have pleaded guilty, mostly to misdemeanour charges of demonstrating in the Capitol.

After spending his first month in jail, Chansley said he re-evaluated his life, expressed regret for having stormed the building and apologised for causing fear in others.

Watkins has characterised the spear Chansley carried as an ornament, disputed that his client’s note to Pence was threatening and claimed Chansley was in the third wave of rioters into the Capitol.

But the judge said video shows Chansley, who entered the Capitol through a doorway as rioters smashed nearby windows, “quite literally spearheaded” the rush into the building.