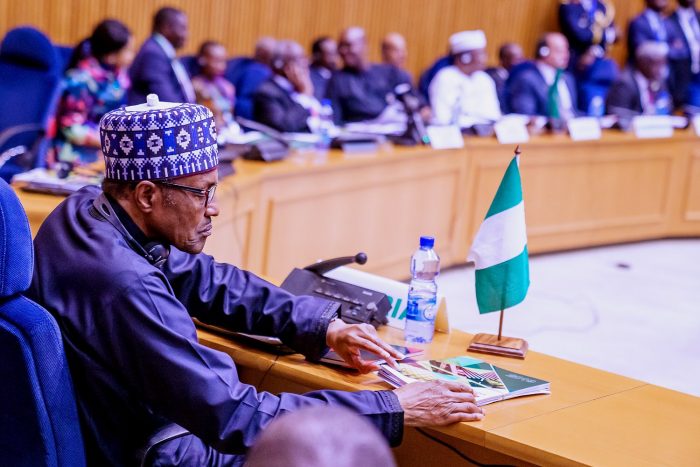 President Muhammadu Buhari has expressed concern over the lack of tangible progress and the worsening security and humanitarian situation in Libya.

President Buhari raised this concerns at  the African Union Peace And Security Council Summit on Situations in Libya and the Sahel in Addis Ababa on Saturday.

A statement from the Nigerian Embassy in Addis Ababa, emailed to the News Agency of Nigeria NAN in Abuja said on Sunday that President Buhari was represented by the minister of foreign affairs Geoffrey Onyeoma

President Buhari said inspite the best intentions and determined efforts by this Council and the entire African Union, the devastating impact of the conflict on the Libyan people, neighbours, the Sahel and the Lake Chad regions remains alarming.

“Nigeria joins in the urgent call for a new and fresh approach that truly reflects the paramount interests of the Libyan people, the region and the continent in general.

“We condemn strongly all forms and manifestations of external interference in Libya including the evident presence of mercenaries and call for strict implementation of the arms embargo.

“It is more worrisome that the international community is divided across as some external powers, continue to interfere and provide military support to different armed groups and militias.

The President said that the interference must stop! , noting that there can be no military solution in Libya.

He reiterated that it has become imperative for all actors to totally respect the hard-won sovereignty and territorial integrity of Libya.

President Buhari also explained that the report by the Chairperson of the Commission provides ample details of the prevailing security situation in Libya and its implication for the Sahel and the Lake Chad Basin, especially the dangers posed by illicit proliferation of small arms and lights weapons.

“We should also bear in mind the horrific situation of many African migrants caught up in the crisis.

“We are witnesses to the recently agreed ceasefire after the outbreak of hostilities due to renewed attacks by the so-called Libyan National Army to forcefully takeover Tripoli, ” the President stated.

He however noted that the threat had persisted  and made worse by the lack of a truly national, professional security forces that could defend the internationally-recognized Government of National Accord (GNA).

He said that the resultant heavy dependence of the government on armed groups and external military assistance for its own security was not sustainable nor in the interest of Libya and regional cohesion.

He also expressed dismay on the reluctance of the UN Security Council to approve the appointment of a joint AU-UN Envoy on Libya.

“For emphasis, Nigeria reaffirms that the AU must play a constructive role in this process in line with the Decision of our 32nd AU Assembly. “

“In this respect, Nigeria welcomes the outcome of the AU High Level Committee Meeting held in Brazzaville, Republic of Congo, on 30 January 2020, which sets out a comprehensive roadmap for Africa to play active roles in the Libyan peace process.

“We would continue to work towards the success of ongoing regional efforts to address the challenges of terrorism, violent extremism and transnational organised crime” he said.

President Buhari said that it was the collective responsibility of members to strengthen the support for the Government and people of Libya and the Sahel, as they strive to create a path towards durable peace and prosperity.
(NAN)