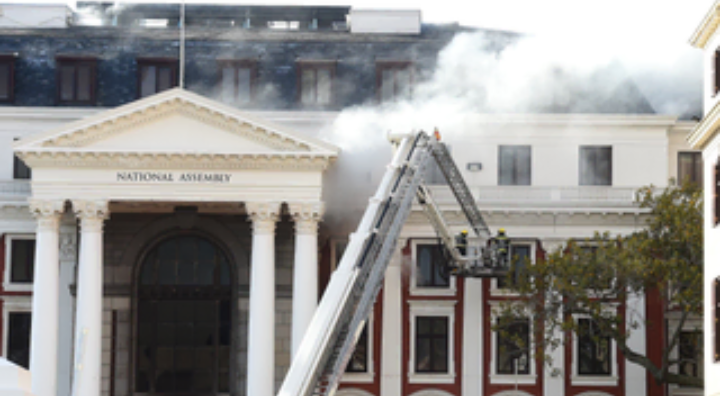 The parliamentary presiding officers will meet with stakeholders today, including Public Works and Infrastructure Minister Patricia De Lille to assess the damage following the fire that gutted parts of Parliament.

In a statement, National Assembly Speaker Nosiviwe Mapisa-Nqakula and National Council of Provinces chairperson Amos Masondo welcomed the swift arrest of a man in connection with the incident.

“They have appealed for calm, cautioned against any speculation and encouraged everyone to afford the law enforcement authorities space to investigate and provide the much-needed conclusive information,” Masondo and Mapisa-Nqakula said.

The docket of the man arrested in Parliament regarding the fire has been referred to the Hawks’ Crimes Against the State team.

The suspect is expected to appear in the Cape Town Magistrate’s Court on Tuesday, on charges of housebreaking, theft and arson under the National Key Points Act.

They assured the citizens that all efforts will be made to limit any disruption of the business of Parliament following the fire that gutted parts of the Parliamentary precinct today.

“The fire that destroyed parts of Parliament today came at a critical time when Parliament’s preparations for hosting the 2022 State of the Nation Address and Budget speech are at an advanced stage.

“The presiding officers have confirmed that these flagship programmes of Parliament will not be affected by this unfortunate incident,” Mapisa-Nqakula and Masondo said.

They commended the Cape Town fire and rescue services for their swift response.

“Had it not been for their prompt response, the damage could have been much worse. They responded within six minutes after they were called and alerted”, they said.

The public works and infrastructure portfolio committee called for calm and for the public to avoid speculations on the fire.

Let us ensure that we provide all the support we can offer to ensure that the adjacent buildings such as Tuynhuys where the Presidency has its Cape Town offices, remain protected,” committee chairperson Nolitha Ntobongwana said.

Ntobongwana also said they were eagerly awaiting the investigations and reports into the fire.

“The committee also wants a full report on the fire incident that damaged the Old Assembly building of Parliament on March 17, 2021. It is important that the cause of both fires is established,” she said.

Meanwhile, calls have been made for the speedy and independent investigation into the fire that left massive destruction.

One of the parties even called for Parliament to be relocated to Tshwane.

“We urgently request that this investigation assess how this fire started and spread with the speed and ferocity that it did to all the houses,” Mazzone said.

ATM (African Transformation Movement) spokesperson said Sibusiso Mncwabe said they hope the fire was not a calculated move for emergency tenders for refurbishments or attempts to scupper his party’s secret ballot for his party’s no confidence against President Cyril Ramaphosa.

Mncwabe said it was suspicious that the fire broke out on the eve of Parliament receiving the state of capture report where Ramaphosa, the ANC and a few MPs were implicated.

“A multi-party team should be appointed as a matter of urgency to get to the bottom of this strange and suspicious first time occurrence. The ATM has no confidence in our intelligence services and thus this matter cannot be left solely in their hands,” Mncwabe said.

The EFF said while it noted the fire with concern, it has long called for Parliament to be relocated to a central location for political and cost-related reasons.

Spokesperson Vuyani Pambo said the location of the legislature in Cape Town and the administration in Tshwane was a deal brokered by the British and Afrikaner settlers upon establishment of the Union of South Africa.

Pambo said the continued location of Parliament in Cape Town was a waste of taxpayers money because it resulted in unnecessary expenditure on both travel and accommodation for parliamentarians and members of cabinet.

“If there is any appetite to curb wasteful government expenditure and cut all ties related to the colonial framework established by those who conquered this nation, this fire must serve as an opportunity to permanently relocate Parliament to Gauteng,” he said.

“The EFF therefore calls for any money which would be set aside for repairs of what seemed like irreversible damage, unless there is a large-scale construction, to be used to relocate Parliament to Tshwane where the Union Buildings reside.

“The location is not only central, but will alleviate the burden of costs on the government,” Pambo said.