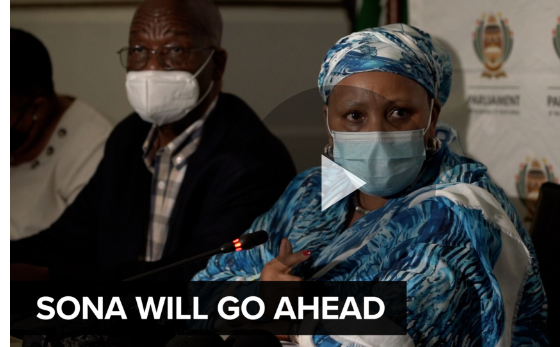 National Assembly Speaker Nosiviwe Mapisa-Nqakula has denied claims she dropped the ball despite a number of security concerns raised about the parliamentary precinct.

Mapisa-Nqakula was grilled by journalists over lacklustre security over the last few months and the dwindling number of police personnel at the precinct.

“Parliament is a national key point. And I will not take responsibility for anything that you are suggesting, which is that there may be charges of treason for me as Speaker because Parliament burnt down,” she said.

Mapisa-Nqakula continued to berate journalists for asking questions, remarking: “Try to be smart sometimes when we raise questions.”

She added she had been in office for less than three months and therefore could not be blamed for the disastrous blaze.

A 49-year-old man was arrested on Sunday in connection with the massive fire at Parliament. The suspect is expected to make an appearance in court on Tuesday.

An irritated Mapisa-Nqakula also shied away from responsibility on whether the fire amounted to treason.

She defended herself by saying she had always defended democracy.

“This lady here, at any given time, has always ensured that she defends the democracy she so hardly fought for,” Mapisa-Nqakula said.

However, the EFF and DA have raised concerns about security and compliance at Parliament.

We know that security has been shocking at Parliament, my offices have been broken into. One 49-year-old man cannot cause such destruction so there has to be things planted. We have to place a great deal of responsibility at the feet of the Speaker and the secretary of Parliament.

The EFF released a statement on Monday evening, saying it was shocked by the lack of compliance with the basic safety, health and environment

“It has failed to put even essential systems in place to ensure that Parliament buildings are in conducive conditions for proper use by Members of Parliament and political party support.

“It is not only the New Assembly Wing and Old Assembly that are not compliant with safety, health, and environment regulations but all buildings, including buildings that accommodate Members of Parliament in parliamentary villages,” it said.

National Council of Provinces (NCOP) chairperson Amos Masondo said the NCOP would leave no stone unturned to get to the bottom of what happened.

“We wish to assure all the people in South Africa that we will leave no stone unturned to enable appropriate actions to be taken by all relevant authorities,” he added.