Obasanjo, others call for unity among Nigerians as FEPSAN boss Etuh buries wife 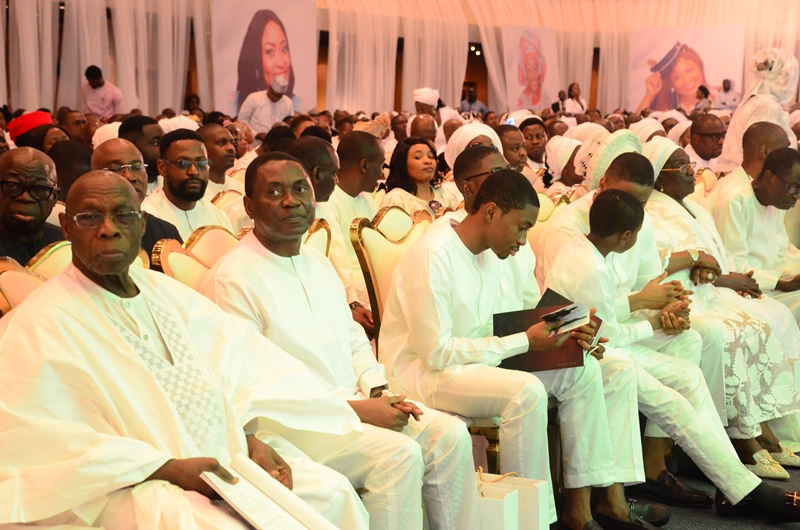 Former Nigeria’s President Chief Olusegun Obasanjo has called on Nigerians to always see themselves as agents of unity as the country navigates the security challenges troubling it.

Obasanjo made the call at the Family Worship Centre (FWC) Abuja during the funeral service for Mrs Jennifer Etuh, wife of Mr Thomas Etuh, Chairman, Fertiliser Producers and Suppliers Association of Nigeria (FEPSAN).

He said Nigeria would be better off if its citizens saw themselves as drivers of unity just as the late Jennifer was, both in life and in death.

“The bible says in all things give thanks. In the part of the country where I come from, culturally, we believe that anybody who dies no matter his or her age, has automatically become the senior to those alive.

“It doesn’t matter how old we are here, Jennifer has become our senior and paying last respect to her has shown that even in death, we also give thanks to God.

“As Thomas has said, here we are.

“Jennifer is a unifier and a bridge builder both in life and in death,” Obasanjo said.

Secretary to Government of the Federation (SGF), Mr Boss Mustapha, who was also at the burial service, said those who walk uprightly enter into peace and that they find rest even as they lie in death.

Mustapha said, “Jennifer has indeed found rest and entered her peace and we celebrate a life well spent just as heaven rejoices in her return.”

News Agency of Nigeria (NAN) reports that the Vice President, Prof. Yemi Osinbajo, had earlier at the service of songs described Jennifer as “a true child of God” whose death had become a very special moment in history.

“Her death is special because when a true child of God departs, it is a very special moment in history.

“This is because it is the time for the fulfillment of the promise that God has made that it is through death that we will inherit the kingdom of God.

“There is no way to inherit that kingdom without death and this is why the Bible says that flesh and blood cannot inherit the kingdom of God; so there must be death before the inheritance of the kingdom.

“So her (Jennifer’s) death is precious in the sight of God,” Osinbajo said.

Also paying tribute, Mr Femi Gbajabiamila, Speaker, House of Representatives, said Jennifer’s demise had gone a long way to show that a worthy live was the greatest legacy any individual could leave for those alive.

Gbajabiamila said: “I stand here as a Muslim brother to speak on the death of a Christian sister. I didn’t have the privilege of meeting Jennifer, but I have an awesome privilege of knowing her husband, Thomas.

“Testimonies abound; we have heard so much, particularly from the young men she left behind, and I think the young men are sufficient testimony of who she was.

“Not only will she be proud of you (the children), I believe that every single person sitting in this auditorium is proud of you.

“It is amazing the way God works and there is nothing anyone can say to console you except to pray that God Almighty give you joy in this difficult time.

“We also pray that God make a way for you that any time you remember your mother it will be with a smile, smile that will last forever.

“Sometimes it is not how long one lived that matters but how well he or she lived; your mother Jennifer has lived well.”

Etuh who noted how painful it was paying tribute to his wife wondered why Nigerians should fight each other seeing how Muslims in their numbers attended church service to honour his wife.

He reminded friends and well-wishers how the late wife called him and their four boys “her project”.

“When you look at the service of Songs yesterday we had a lot of Muslim faithful and today the same thing; what are we fighting for? My best friend was Mohammed Bashir from Katsina State.

“My lovely wife scolded, she counseled, she whipped, she fasted, she prayed and much more she trusted God for His words. And God has been answering our prayers.

“She has sown the seed that produced the right fruits which I will dedicate my life to watering them.

“Starting life with my loving wife from scratch and her support in handling the home front enabled me to travel and build relationships and contacts through which God has used to bless us.

“She wants us to start a foundation in her name for women suffering from cancer which was what she battled with till her last day,” Etuh said.

Rev. Joe Olaiya, President and Founder, Living Faith Foundation, in his funeral sermon which was taken from 1 Corinthians 15:26 said “the last enemy that shall be destroyed is death”.