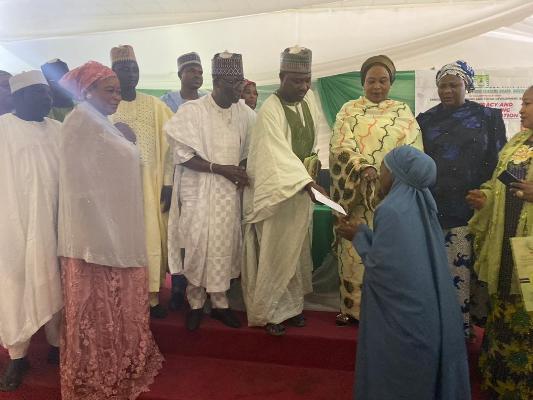 The National Film and Video Censors Board (NFVCB) on Thursday organised a capacity building on film classification for 200 youths in Maiduguri and provided them with start-up grant and packs.

News Agency of Nigeria (NAN) reports that NFVCB organised the programme in collaboration with the State’s Ministry of Women Affairs and Social Development.

The beneficiaries, drawn from different Local Government Areas, including IDP camps, were trained and made ‘Community Ambassadors’ of the NFVCB against unclassified films and harmful video contents in the state.

Mr Adedayo Thomas, Executive Director of the NFVCB, said the event was in furtherance of the board’s capacity building and mentorship initiative in the creative sector for youths in the North East.

According to him, Maiduguri is chosen for the event to complement the state government’s effort at ensuring that youths are positively engaged.

“This is another programme in our implementation series for zonal intervention projects on youth and women capacity building and media literacy.

“Over the last nine months, we have touched all the regions of the country and we are glad we could extend this here in partnership with the Borno State Ministry of Women and Social Development.

“This programme entails the sensitisation of youths on the importance of film classification and censorship as well as the various openings in the film and video sector that they can leverage to empower themselves.

“The participants will be inaugurated today as NFVCB ambassadors and given mobile phones each for easy contact with the board to help in sanitising and protecting our cultural and social values as a nation,” said.

Thomas commended the state for the collaboration, adding that young talents abound in the state that needed to be given necessary support and enabling environment.

He, therefore, urged the state government to create film villages to serve as hubs for the incubation and nurturing of talents and to boost job creation and revenue in the state.

He added that there was need for the state to create its Film Classification Board in order to properly oversee development of its movie industry, preserve and protect cultural and moral values.

“The people can tell their own compelling stories in their local languages and sell to the world through transliteration and subtitling.

“We believe there is an urgent need to tap into the inherent opportunities and gains for the State, as Nigeria is now the New Emerging Film Market in the global space,” he said.

Gov. Babagana Zulum of Borno, who was the Special Guest of Honour, commended the NFVCB and the state Ministry of Women Affairs for the initiative.

The Governor, who was represented by the Commissioner for Youths and Sports, Mr Saryinna Buba, said the state would work with the NFVCB to harness the creative potentials in the state.

Earlier in her remarks, Zuwaira Gambo, the Commissioner for Women Affairs and Social Development, said the ministry, was committed to collaborations that would engender development in the state.

Gambo, who is also a board member of the NFVCB, said the beneficiaries were carefully selected in order of needs and talents.

“There are youths from IDP camps selected for this training to enable them become engaged as part of government’s rehabilitation and empowerment efforts.

NAN reports that seasoned industry players and management team of the NFVCB, as well as top government officials from the state were present at the event.