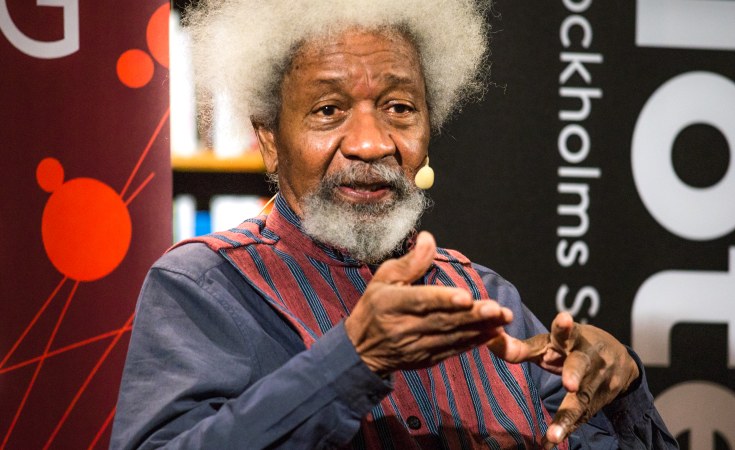 Nobel laureate, Wole Soyinka, has condemned the reintroduction of the Bill on National Water Resources 2020 to the National Assembly.

In a statement on Thursday, Mr Soyinka warned that the bill, if passed into law, would hand the president “absolute control over the nation’s entire water resources, both over and underground. “

“A roundly condemned project, blasted out of sight by public outrage one or two years ago, is being exhumed and sneaked back into service by none other than a failed government, and with the consent of a body of people, supposedly elected to serve as custodians of the rights, freedoms and existential exigencies of millions,” Mr Soyinka said in the statement titled MLK’s Mighty Stream of Righteosuness,’ in reference to the late Martin Luther King’s ‘I have a dream’ speech.

Sec. 125 – Entry onto land in furtherance of duties (2) An authorized person’ may, at any reasonable time and on production of their identity card or other instrument or certificate of designation if so required, enter a property with the necessary persons, vehicles, equipment and material in order to carry out routine inspections of the use of water or disposal of waste water under any authorization.

(1) No person shall- (a) use water otherwise than as permitted under this Act;

“The basic facilitator of human existence, water – forget for now all about streams of righteousness – is to become exclusive to one centralized authority,” said Mr Soyinka.

“It will be doled out, allocated through power directives from a desensitized rockery that cannot even boast of the water divining wand of the prophet Moses. If the current presiding genius – and this applies equally to all his predecessors without exception – had a structured vision of Nigerian basic entitlements, Nigerians would, by now, be able to boast the means of fulfilling even that minimalist item of COVID-19 protocols that calls for washing one’s hands under running water.

“As for potable water, for drinking and cooking, let us not even begin to address such extra-terrestrial undertaking.

“What next for the exclusive list? The rains? I declare myself in full agreement with virtually every pronouncement of alarm, outrage, opprobrium and repudiation that has been heaped upon this bill and its parentage, both at its first outing, and since this recent re-emergence.”

The Nobel laureate said it is time to move beyond denunciations and embark on practical responses for the bill’s “formal deactivation and permanent internment.”

“Let all retain in their minds that, from the same source that preached the ‘streams of righteousness’ is encountered the promise of ‘no more floods, the fire next time.

“In any case, let the promulgators of this obscenity, high and low, understand that the placid waters they think to control unjustly and grotesquely, will turn to be Martin Luther King’s ‘mighty stream of righteousness’ that will overwhelm and sweep them off their complacent, and increasingly loathsome sectarian, conspiratorial heights.

“One polluted stream of human existence compounds the next. A violation here joins forces with its tributary of resentment there yonder, all seemingly unconnected. Martin Luther King’s streams of righteousness turn into a mighty torrent of repulse that overwhelms the perpetrators but, alas, takes down much else as collateral, irreparable damage.

“That is the only cause for regret and – restraint. Hence our duty to position that anguished question frontally, and call the world to witness our open propagation of that challenge: Do future lives matter?

“Let Buhari and his myrmidons ponder that question in the deepest recesses of their hearts and minds. They should not bequeath to future generations the harvest of the grapes of wrath.”