Niger Delta youths, others laud Senate’s decision on NDDC board 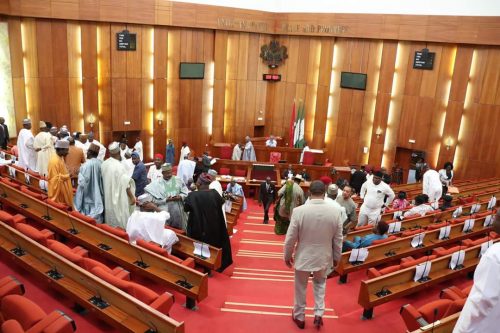 Niger Delta Youth Council (NDYC) and Coalition of Niger Delta Peoples with Disabilities have commended the Senate for demanding the inauguration of Board of the Niger Delta Development Commission (NDDC) ahead of the Commission’s budget defence.

A statement jointly signed by the National Coordinator of NDYC, Engr Jator Abido, Chief George Kpesu and the leader as well as Preye Simon for Coalition of Niger Delta Peoples with Disabilities described as patriotic, the call by the Senate on the Executive to immediately inaugurate the Board it had confirmed.

The senate insisted that the inauguration should take place before the Commission’s budget defence.

“We Commend the Senate for taking such a patriotic stand as allowing an illegal interim committee to defend the budget would only make a mockery of the Commission, the National Assembly and the nation at large.

“We equally commend Senate Minority Leader, Sen. Enyinnaya Abaribe for bringing up the matter on the Floor of the Senate,” the statement read.

It would be recalled that the Senate on Tuesday following the presentation of the 2019/2020 budget of the NDDC to the Senate by President Muhammadu Buhari, raised concern that governing board of the agency recently cleared by it had not been inaugurated.

It therefore urged the executive to do the right thing so that the right persons can come and defend the NDDC’s Budget.

The groups also alleged that its members were brutalised by a team of police officers mobilised by the interim NDDC Board for demanding that the confirmed Board be sworn in.

They, however, demanded an apology from the Police for brutalising the Rivers State Coordinator of NDYC Mr Chinedu Livinus, Mr Emmanuel Benjamin popularly known as Gen Omormor and others still receiving treatment in the hospital.

“It is unacceptable that the Police will allow itself to be used as stooge to disrupt a civil protest which is within our rights as citizens.

“Our demands during the protest in Port Harcourt calling for immediate swearing in of a board confirmed by the National Assembly is the least thing expected of any group that has the interest of the Niger Delta region at heart.

“That the interim committee which by all means is illegal to mobilise the Police to disrupt a peaceful patriotic movement thus says a lot.

“It has become clearer that this illegal interim committee that was smuggled into the Commission at the eleventh hour is the handiwork of those who fought tooth and nail to frustrate the composition of the board.

“The new board has been applauded by all well-meaning Niger Deltans,” the statement added. (NAN)