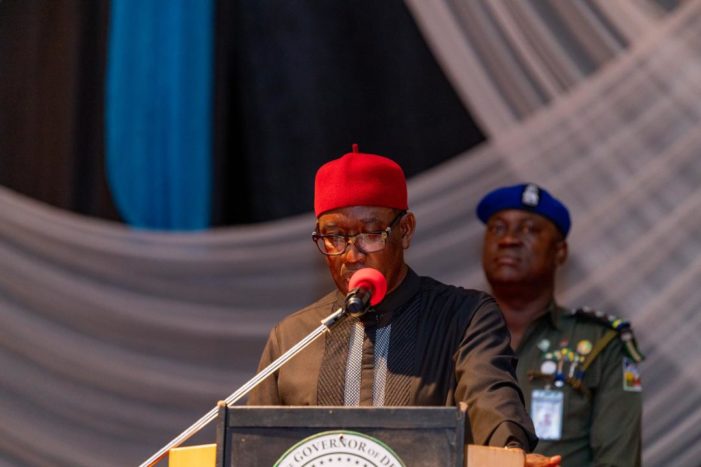 Gov. Ifeanyi Okowa of Delta has expressed optimism that the New Year will be characterised with sustainable development as the state government remains irrevocably committed to the ”Stronger Delta’ vision.

The governor said this in his New Year message to the people of the state through a statement signed by his Chief Press Secretary, Mr Olisa Ifeajika, made available to the News Agency of Nigeria (NAN) on Tuesday in Asaba.

Okowa urged the people of the state to remain united and focused on the course of developing the state, irrespective of ethnic, religious or political differences.

The governor, while felicitated with the people of Delta and Nigerians as they stepped into 2020, expressed gratitude to God for the grace granted Delta and its citizens in 2019.

He prayed for unity, peace and development in the state, which he noted would help to promote his Stronger Delta vision.

He urged the people to remain supportive of government, saying that peace remained the bedrock of meaningful development in any society.

The governor expressed hope that 2020 would be a year of fulfillment as the state remained on the right trajectory to sustainable development.

“Given our modest strides in the past five years, I have no doubt that with the same level of cooperation from the good people of Delta, we will achieve more in all facets of governance.

“I am optimistic of a Stronger Delta in 2020 because of the support I enjoy from the legislature, the judiciary, the civil service, traditional and religious leaders and my team of political appointees.

“Other sources of strength to us are agencies of government, both at the federal and the state levels, multilateral donor agencies and most importantly, our trust and believe in God.

“As one of the first states to sign our 2020 budget into law, we are prepared for the onerous task of governance as we are already set to hit the ground running as the New Year commences.

“This has given me and the state the advantage of early starters, both in the appreciation of what Deltans expect from their government and in the development of solutions to meet such expectations.

“Furthermore, our administration recorded successes in the last five years because God was in control and it is my hope that 2020 will be a year of fulfillment for all Deltans as the state remains on the right path to sustainable development.

“So, let us look up to the new year with the same zeal of a people with a capacity to excel even in difficult situations.

“On behalf of my family, the government and people of Delta, I wish you all a very prosperous new year ahead.” (NAN)