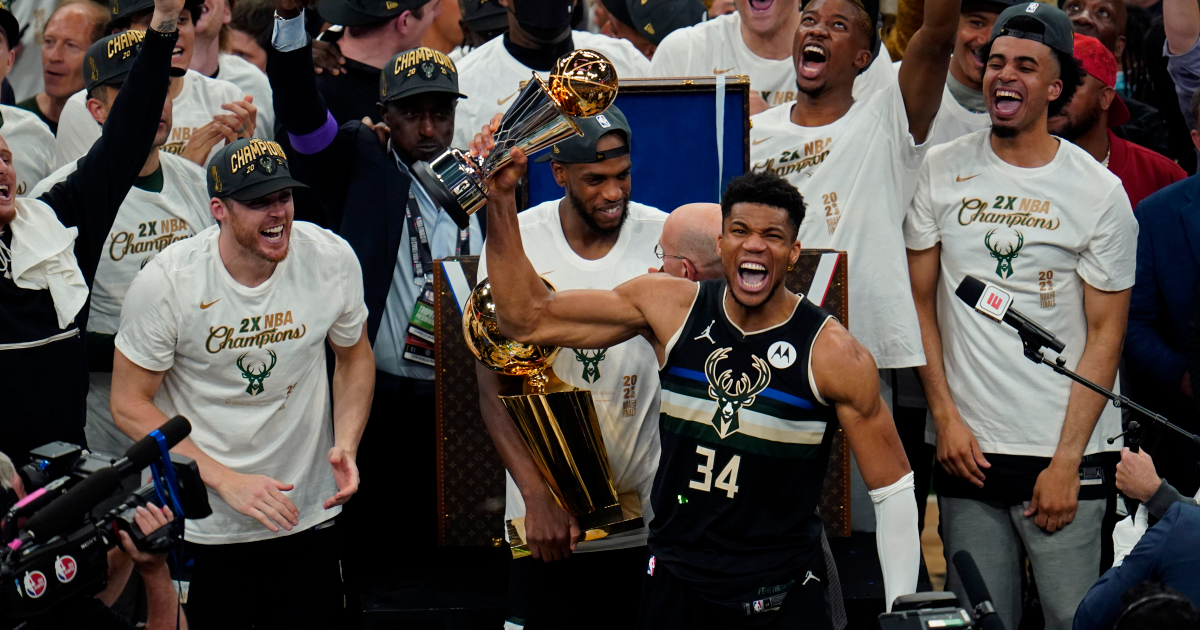 In what is one of the greatest NBA finals performances ever, 26-year-old Antetokounmpo scored 50 points, had 14 rebounds and five blocked shots to lead his team to a 105-98 victory over the Phoenix Suns.

Antetokounmpo, who was making his finals debut, was named the NBA Finals Most Valuable Player after leading the Bucks to a 4-2 series win. The accolade made him only the third player in history, behind Michael Jordan and Hakeem Olajuwon, to win a regular season MVP Award, a Finals MVP Award and a Defensive Player of the Year Award.

Giannis immediately celebrated his NBA Championship with his family following the buzzer 🥺 pic.twitter.com/ddyrXcP6pr

Antetokounmpo was born in Greece to Nigerian parents, but did not become a Greek citizen until 2013. He has spoken openly about his hardscrabble childhood and the racism he and his family faced in Greece amid a far-right pushback against migrants. He has since become a lauded national figure.

After the victory on Tuesday, Antetokounmpo immediately rushed to his family to celebrate. He later thanked his mother for his work ethic and never pressuring him to veer away from basketball.

“I hope I give people around the world – from Africa, from Europe – hope,” he said. “I’m a champion.”

Antetokounmpo also thanked his teammates, particularly, Khris Middleton, who scored 17 points and made two free throws with 44.7 seconds left to give the Bucks a 104-96 advantage.

“He played amazing for us, he led us when I was down,” Antetokounmpo said. “Once we are done enjoying this, we’ve got to get back to work. Build off this. Hopefully, we can do it again.”

It was the first title victory for Milwaukee since 1971 when Lew Alcindor – who later changed his name to Kareem Abdul-Jabbar – and Oscar Robertson led the Bucks to their first championship in 1971.

“For the city, I’m sure it means everything,” said Middleton. “They’ve seen the work that we put in over the years for them to get to this point.”

Tuesday night’s victory also capped a post-season energised by the return of fans to stadiums after all of 2020 and much of the 2021 season were played without spectators per COVID-19 restrictions.

What started as a gradual rise for Antetokounmpo and the Bucks sped up in the last few years and they thought they might be here the last two seasons. They had the NBA’s best record in 2018-19 but blew a 2-0 lead against Toronto in the Eastern Conference finals.

They came back with the best record again last season but never regained their momentum after the season was suspended because of the coronavirus pandemic in March. They were eliminated in the second round by Miami while playing in a pandemic “bubble”.

On Tuesday night, 65,000 fans packed into the Deer District outside, a wild party that figured to last deep into the Midwestern night.

Despite several turnovers throughout the game that threatened to choke the Bucks, the Suns were not able to capitalise on the giveaways.

Phoenix guard Chris Paul, playing in the first NBA Finals of his 16-year career at age 36, led the Suns with 26 points.