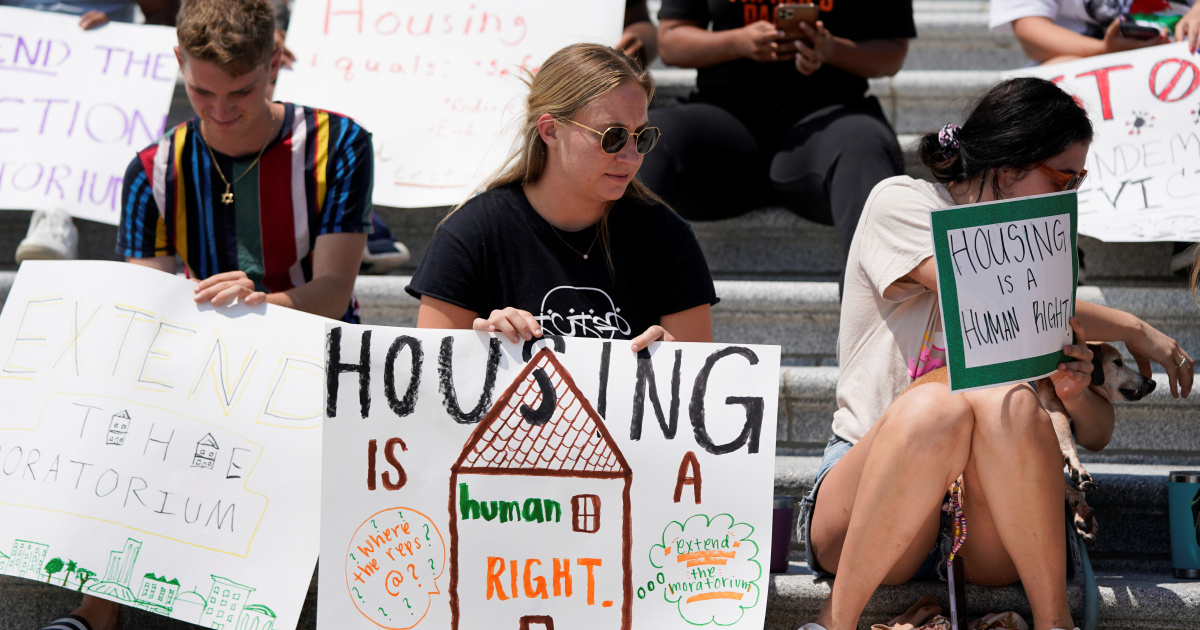 Millions of people across the United States could be forced out of their homes as a nationwide moratorium on evictions is set to expire at midnight on Saturday amid a spike in coronavirus infections.

With billions in government funds meant to help renters still untapped, President Joe Biden this week urged Congress to extend the 11-month ban on removals after a recent Supreme Court ruling meant the White House could not do so.

But Republicans balked at Democratic Party efforts to extend the eviction ban through mid-October, and the House of Representatives adjourned for its summer vacation on Friday without renewing it.

Progressive Democratic Congresswoman Cori Bush, Ayanna Pressley and Ilhan Omar slept outside the Capitol from Friday to Saturday to demand a moratorium extension.

“We [Democrats] control the House, Senate, and White House. We must keep people housed,” Bush wrote on Twitter, urging Democratic House Speaker Nancy Pelosi to recall the chamber for a vote and Democratic Senate Majority Leader Chuck Schumer to extend the ban.

It’s 1 AM. Our solidarity is strong and our numbers are growing.

Millions are at risk of being removed from their homes, and a Democratic-controlled government has the power to stop it.

“So many people are at risk of homelessness in our district and many have already experienced it. We are out here for them,” Omar also tweeted.

The moratorium’s expiration could put millions of Americans at risk of being forced out of rented houses and apartments.

More than 3.6 million Americans are at risk of eviction, some in a matter of days, as nearly $47bn in federal housing aid to the states during the pandemic has been slow to make it into the hands of renters and landlords owed payments. Evictions could begin as soon as Monday.

Landlord groups have opposed the ban on evictions, which the US Centers for Disease Control and Prevention (CDC) first put in place in September 2020 to combat the spread of COVID-19 and prevent homelessness during the pandemic.

More than 15 million people in 6.5 million US households are currently behind on rental payments, according to a study by the Aspen Institute and the COVID-19 Eviction Defense Project, collectively owing more than $20bn to landlords.

The US Supreme Court last month decided 5-4 to leave in place the CDC’s moratorium. The CDC said last month it would not extend the ban past July 31.

Tensions mounted late on Friday as it became clear there was no resolution in sight. Hours before the ban was set to expire, Biden called on local governments to “take all possible steps” to immediately disburse the funds.

Taking summer recess while your constituents face eviction is not just an “atrocity”, it’s also an abdication of responsibility.

I canceled my flight home and stayed in DC hoping my colleagues would do the same, but we had to adjourn since some rushed to their summer vacations. https://t.co/8A048JVc5I

“There can be no excuse for any state or locality not accelerating funds to landlords and tenants that have been hurt during this pandemic,” Biden said in a statement. “Every state and local government must get these funds out to ensure we prevent every eviction we can.”

The US Departments of Agriculture, Housing and Urban Development, Veterans Affairs and the Federal Housing Finance Agency on Friday separately extended their foreclosure-related eviction moratoriums until September 30, the last day of the current fiscal year.

Some states have chosen to extend eviction moratoriums beyond July 31, including New York, whose moratorium runs through August 31, and California, which extended its ban through September 30.

The potential evictions come as the US is seeing a surge in coronavirus infections, propelled by the spread of the more contagious Delta variant.

“We’re going in the wrong direction,” Dr Anthony Fauci, the White House’s chief medical adviser, said last week, warning that most new cases, hospitalisations and deaths were among unvaccinated people across the country.

“The confluence of the surging Delta variant with 6.5 million families behind on rent and at risk of eviction when the moratorium expires demands immediate action,” Diane Yentel, executive director of the National Low Income Housing Coalition, told The Associated Press.

“The public health necessity of extended protections for renters is obvious. If federal court cases made a broad extension impossible, the Biden administration should implement all possible alternatives, including a more limited moratorium on federally backed properties.”