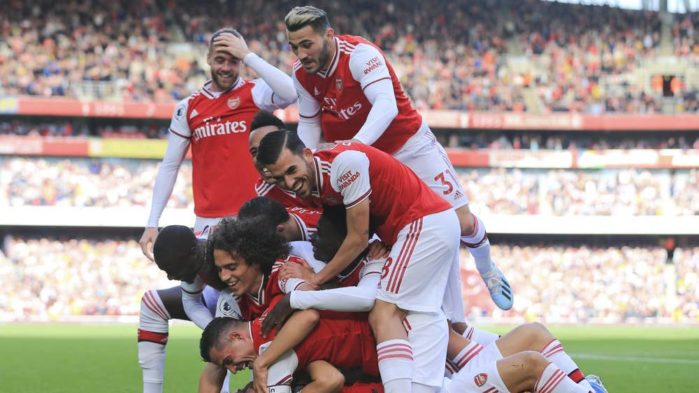 Arsenal moved up to third in the Premier League standings after David Luiz scored his first goal for the club in a nervy 1-0 win at home to Bournemouth on Sunday.

The game played at the Emirates Stadium saw the visitors missed a flurry of chances to level in the second half.

The former Chelsea defender darted across the area undetected to glance a Nicolas Pepe corner into the far corner to give Arsenal the lead in the ninth minute.

Arsenal’s record signing Pepe came close to doubling their lead with a shot that just missed the top corner while Pierre-Emerick Aubameyang also saw a shot from distance flash just wide in the first half.

Bournemouth, who were beaten 5-1 on their last trip to the Emirates Stadium, produced a cagey display in the first period, although they nearly equalised when Dominic Solanke narrowly missed the target with a header from a free kick.

They showed far more ambition in the second half while Arsenal lost focus but failed to take their chances, with Callum Wilson mis-placing a pass in the area after rounding Bernd Leno and later seeing a shot tipped over by the German goalkeeper.

Steve Cook headed over from a corner as Arsenal somehow clung on for the victory, moving above Leicester City into third on 15 points, nine behind leaders Liverpool after eight games. (Reuters/NAN)