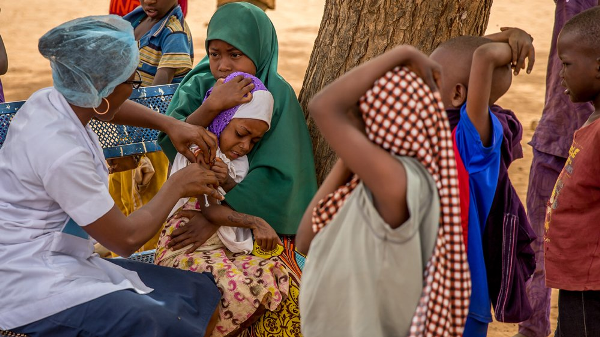 The Chairman of Kuje Area Council, FCT, Malam Abdullahi Sabo, on Saturday launched a ten-day integrated Measles and Meningitis ‘A’ vaccination in the area.

Speaking at the ceremony at the Primary Health Care Centre in Kuje, Sabo said the measles vaccine was to be given to children between the age of nine months and five years.

He further explained that only children between the age of one year and five years were to be immunised against meningitis.

Represented by his wife, Hajia Salamatu, Sabo said that the two diseases, which were airborne, were common in African countries and often occurred during the dry season.

He said the council was targeting more than 300 children in the area, urging caregivers, parents and guardians to take the exercise seriously.

According to the Primary Health Care Coordinator of Kuje Area Council, Mr Haruna Agwai, the ailments were associated with the dust of dry season and that preventive measures are necessary before the season sets in.

Agwai added that the vaccination was a second chance to children who did not meet up with the first exercise at the time they attained nine months.

He, however, called on parents in the area to cooperate with the health workers for the success of the exercise.

According to him, Kuje Area Council Administration and the Primary Health Care Centre were determined to ensure that children in the area were healthy. (NAN)