Kenya election 2022: William Ruto to be sworn in as president 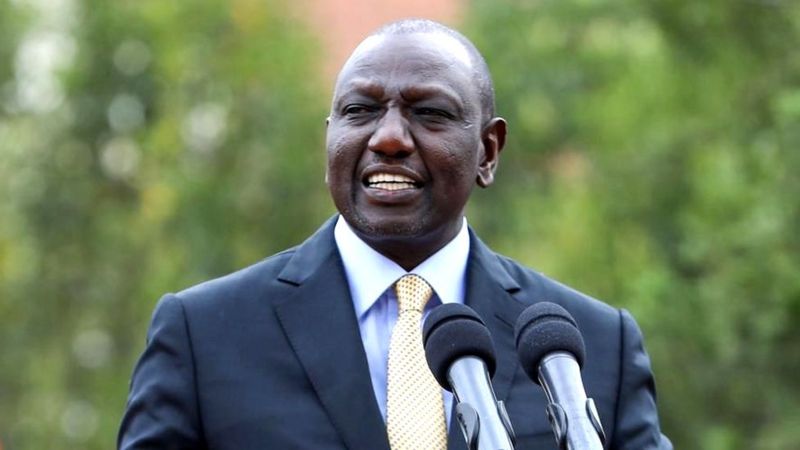 William Ruto, who had been deputy president since 2013, won last month’s election by a narrow marginAs many as 60,000 people are expected to attend a ceremony for William Ruto’s inauguration as Kenya’s new president following his election win last month.Defeated candidate Raila Odinga said he would not be present as he had “serious concerns” about his opponent’s victory.Mr Ruto won the election by a narrow margin of just 50.5% of the vote, to Mr Odinga’s 48.8%.Mr Odinga has alleged that the result was rigged, but the Supreme Court has ruled the election was free and fair.At least 20 heads of state are expected to witness the inauguration at a stadium in the capital Nairobi, in a clear sign that they accept Mr Ruto as Kenya’s new president.

Follow live updatesReligion – the force behind Kenya’s new presidentOutgoing President Uhuru Kenyatta will hand over the symbols of power – a sword and a copy of Kenya’s constitution – to Mr Ruto, who was his deputy during his two terms in office.Mr Kenyatta backed Mr Odinga in the election, saying Mr Ruto was unworthy to serve as president.It led to a massive fallout between the two men, and Mr Kenyatta congratulated Mr Ruto on his win only a day before his inauguration.Mr Kenyatta said he was committed to a peaceful transition and urged the new president to serve all Kenyans.People chant slogans during the inauguration of Kenya”s President William Ruto before his swearing-in ceremony at the Moi International Stadium Kasarani in Nairobi, Kenya September 13,

William Ruto becomes Kenya’s fifth president since independence in 1963In a statement, Mr Odinga said he had received a call from Mr Ruto inviting him to the inauguration, but that he would not attend as he was abroad and he did not believe the election was free and fair.This is despite the fact that the Supreme Court handed down a unanimous judgment, confirming Mr Ruto’s victory and dismissing Mr Odinga’s concerns that the election was marred by widespread irregularities.Mr Ruto won after portraying himself as a “hustler” who was challenging an attempt by two dynasties – the Odingas and Kenyattas – to hang on to power.He promised a “bottoms-up” approach to the economy to tackle the high unemployment rate among young people, and to improve the lives of those less well off.