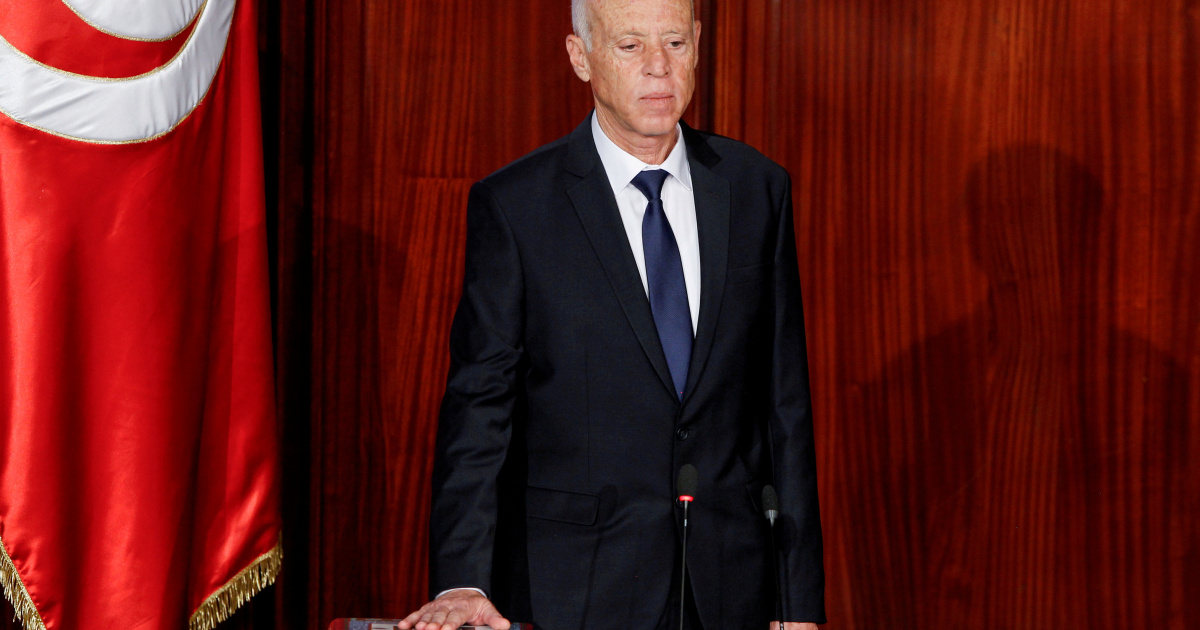 President accused of attack on Tunisian democracy after sacking the country’s prime minister and suspending parliament.

Tunisia’s president described his election victory in 2019 as ‘like a new revolution’ – and on Sunday night he brought huge crowds of supporters onto the streets by sacking the government and freezing parliament in a move his foes called a coup.

Kais Saied, a 63-year-old political independent and former constitutional lawyer with an awkward public manner and a preference for an ultra formal speaking style of classical Arabic, is now at the undisputed centre of Tunisian politics.

Nearly two years after his election and a separate vote that created a deeply divided parliament, he has sidelined both the prime minister and parliament speaker with a move seen by critics as an unconstitutional power grab.

However, as tens of thousands of people flooded the streets of major cities to celebrate, Saied appeared to be riding a wave of popular anger against a political elite that has for years failed to deliver the promised fruits of democracy.

While the parliament speaker, Rached Ghannouchi, has been tainted with the messy compromises of a decade of democratic politics since Tunisia’s 2011 revolution, Saied entered the scene in 2019 as a comparative newcomer.

Presenting himself in his campaign as an ordinary man taking on a corrupt system, he fought the election without spending money and with a bare-bones team of advisers and volunteers – winning the backing of leftists, Islamists and youths alike.

His supporters said he spent so little on the election that it cost only the price of the coffee and cigarettes he consumed meeting Tunisians and presented him as a paragon of personal integrity.

Once elected, he appeared for a while shackled by a constitution that gives the president direct power over only the military and foreign affairs while daily administration is left to a government that is more answerable to parliament.

Saied has made no secret of his desire for a new constitution that puts the president at centre stage – prompting critics to accuse him of wanting to emulate Egypt’s President Abdel Fattah el-Sisi in stripping his foes of power.

As president, Saied quickly feuded with the two prime ministers who eventually emerged from the complex process of coalition building – first Elyes Fakhfakh and then Hichem Mechichi.

However, the biggest dispute has been with the moderate Islamist Ennahda party and its veteran leader Ghannouchi, a former political prisoner and exile who returned to Tunisia in 2011.

Over the past year, Saied and Mechichi, backed by Ghannouchi, have squabbled over Cabinet reshuffles and control over the security forces, complicating efforts to handle the pandemic and address a looming fiscal crisis.

As protests erupted in January, however, it was the government and the old parties of parliament who faced the public’s wrath – a wave of anger that finally broke last week as COVID-19 cases spiked.

A failed effort to set up walk-in vaccination centres led Saied to announce last week that the army would take over the pandemic response – a move seen by his critics as the latest step in his power struggle with the government.

It set the stage for his announcement on Sunday following protests targeting Ennahda in cities around the country.

During the 2011 revolution, his students and friends said, he used to walk the narrow streets of Tunis’ old city and the grand colonial boulevards downtown late at night, discussing politics with his students.

Saied was one of the legal advisers who helped draft Tunisia’s 2014 democratic constitution, though he soon spoke out against elements of the document.

Now, some of the main political inheritors of Tunisia’s revolution are casting him as its executioner – saying his dismissal of government and freezing of parliament are an attack on democracy.