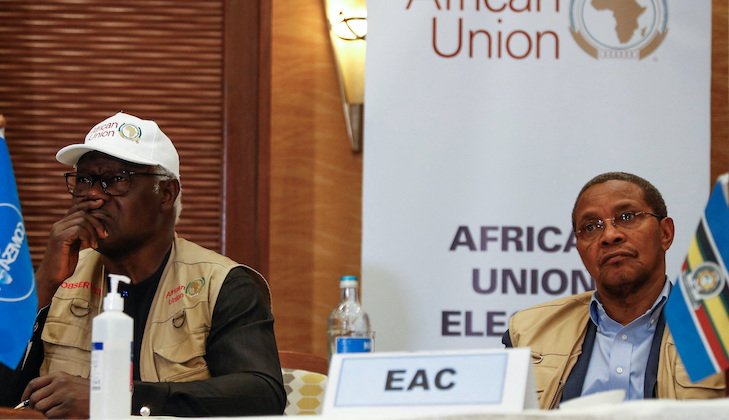 Meanwhile, observers from the East Africa Community (EAC), Intergovernmental Authority on Development (IGAD), the Commonwealth, the African Union (AU), the Common Market for Eastern and Southern Africa (COMESA) and the European Union praised the electoral body for conducting a smooth voting exercise, despite reported cases of failed electronic identification kits in some polling stations.

“Overall, the EAC observer mission is satisfied with how the voting was conducted, “ said Tanzania’s former president Jakaya Kikwete, the head of the observer group.

“We appeal to all political actors & Kenyans at large to continue maintaining peace after the elections results are declared. We implore all to embrace peaceful resolution methods, for any disputes that may arise,” EAC Head of Kenya’s Election Observer Mission, H.E @jmkikwete pic.twitter.com/ADiasC4uvY

However, the regional observer group called for better communication between the electoral agency and various political stakeholders to avoid mistrust in future elections.

Observers from the AU say some politicians – without naming them – misused state resources that created an unfair playing field, especially for smaller campaigns.

#AU #COMESA #EOM Head @ebklegacy presented the statement of preliminary findings of the #Kenya General elections in at a joint Press Conferencehttps://t.co/B6VsWVqdFg@AUC_PAPS pic.twitter.com/QAC8llDRFr

“While the campaigns were largely peaceful and issue-based, hate speech, misuse of state resources, non-adherence to campaign schedules” were problems, said Ernest Bai Koroma, the head of the AU mission and a former president of Sierra Leone.

Even as verifying and tallying of the presidential results continues, both the Odinga and Ruto camps are using social media to tell their supporters that their candidate has won.

Observers from the Commonwealth are warning that the delay in releasing the final presidential results is allowing disinformation to spread and is causing tension among supporters.

“The time lag between the announcement of the official results is an area of concern,” said Bruce Golding, the head of the Commonwealth observer group. Results from the presidential race are expected on Tuesday 16 August.

Results must be tabulated accurately to ensure confidence in the system

Observers from the National Democratic Institute (NDI), a US-based group, echoed these remarks, noting that misinformation may in turn lead citizens towards a lack of confidence in the IEBC.

“Results must be tabulated accurately to ensure confidence in the system,” said Donna Brazile, head of the NDI.

Ivan Štefanec, the chief observer of the EU team, said fundamental freedoms were respected during the voting exercise, but procedural shortcomings demonstrate the need for improvements.

“Lack of proper campaign finance framework damaged the campaign environment and created an unlevel playing field, disadvantaged those with less access to funds, especially women, who made up only 12% of the candidates,” said Štefanec.

He further observed that the Kenyan media covered the elections extensively, though some bias in broadcast media was also flagged.

The observers said they can only determine if the Tuesday vote was free and fair after the final announcement of the presidential vote.

They have, however, urged the losing candidate, if not satisfied, to mount a legal challenge in court and maintain calls for peace.