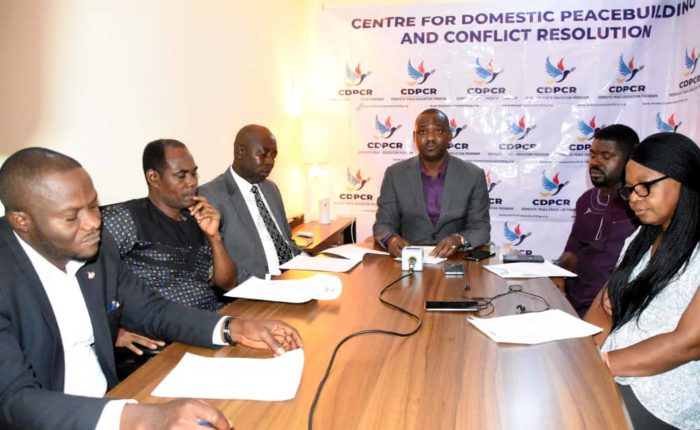 …..Plans peace education for 1m families in the North East

Centre for Domestic Peacebuilding and Conflict Resolution, an NGO has called on the federal, state and local government not to use force alone in the fight against insecurity and insurgency but to embrace peace education.

Mr Francis Adabenege, Executive Director of the centre, at a newsmen conference on Friday in Abuja said the only way to ensure successful integration and sustain peace in the North East was through peace education.

Adabenege commended the Federal Government for the successes being recorded in the war against insurgency.

However, he stressed that after demobilisation and disarmament strategy there was an urgent need for domestic peace education programme starting from the smallest institution being the family.

To this end, he said the Centre planned to educate no fewer than one million families in the North East on building peace because the war against insurgency could not be sustained if the people were not educated on peace.

“This is the reason the Centre has come up with a strategy of Domestic Peace Education that can help the Federal Government “truly and totally” win the war against Boko Haram insurgency and other uprising.

“The programme will impact the North East and change the mindset of the people.

“It will change the narratives about conflict, change the approaches to conflict handling by not relying only on force and help to heal post-conflict trauma and psychological disorder.

“It is also for this reason that the Centre is proposing partnerships with the government at federal and state levels to organise series of workshops to help the people to discover, explore and feel peace and build the “Culture of Peace”.

“As many of you may already know, religion is the major cause of conflict around the world.

“But our peace education strategy transcends beyond religion and evening ethnicity but focuses more on the core of humanity.’’

According to Adabenege, the purpose of the workshop is to help participants to explore the possibility of personal peace and discover their own inner resources.

He said that the centre believed that it was the responsibility of every human being to create the peace that would make a difference in the society.

This, according to him, is because peace is inside human beings as the inhabitants of the earth.

Adabenege said that the centre also used the opportunity to call for collaboration with government agencies, the private sector and other civil society organisations and well as NGOs.

He particularly requested the Federal Ministry of Humanitarian Affairs, Disaster Management and Social Development to partner the centre in attaining the core of its responsibility.

“We wish to share our skills and make expert contributions as a solidarity partner to build collective human capacity and connect with the people living in poverty and social exclusion especially the women, children and the youth.

“We want to mobilize and organise groups of youths and women with “can do attitudes”, community-based organisations and networks of people living in fear of violence conflict, poverty and exclusion,” he said.

News Agency of Nigeria (NAN) reports that the centre was established in 2016 as a community-based non-governmental, non-profit, non-political and a humanitarian organisation.

The centre is committed to the prevention of violent conflicts by fostering peace education, capacity building and human development, environmental peace-building and conflict resolution in Nigeria. (NAN)