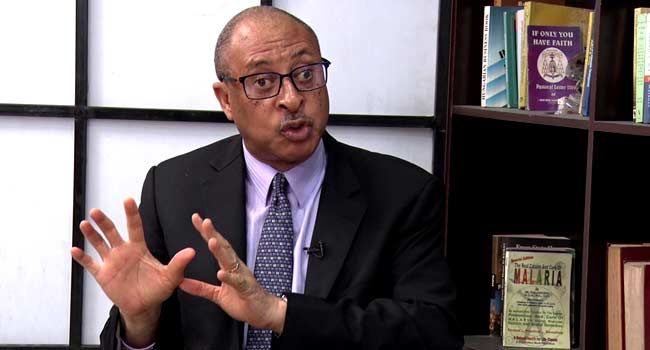 Professor Pat Utomi, a renowned economist and former presidential candidate of African Democratic Congress (ADC), has called for national dialogue on the political future of the country and its security challenges.

Utomi made the call in Abuja at a one-day strategic citizens’ conversation on the state of the nation, organised by Nigeria Patriots Renaissance Forum.

The News Agency of Nigeria (NAN) reports that the conversation was aimed at rigorously dealing with how Nigeria’s political structure has contributed to under-developing it.

The programme was also organised to fashion a way forward for a robust transformative process for national development and resurgence.

Utomi, while explaining the rationale behind his call for a national conversation, said the time had come for all hands to be on deck to make concerted efforts to fix the numerous problems confronting the country.

“As I go around Nigeria, I have found out that most Nigerians are in despair; they have even given up on their country and that is a very dangerous thing to happen to any people.

“The question, therefore, is: why are Nigerians so distrust; why are they so unhappy; why are our leaders trading abuses and insults everyday on one another.

“It seems to me that it is because we are not having national public conversation which should focus on the common good of all.

“We need to engage all critical stakeholders’ and groups, but we are starting from the group I like to refer to as complacent middle,” Utomi said.

According to him, the engagement will ensure that Nigerians think and work positively to move the country forward.

Also speaking, Chief Ralph Nwosu, National Chairman of ADC, urged political parties in the country to evolve new ways of engaging and giving back to the society.

This, he said, would rekindle hope in many Nigerian citizens who saw political parties and politicians as dirty.

“There has been this concern that the voices of the citizens are not being heard again.

“So, we came together to ask ourselves: what do we need to do? We need to start engaging the citizens so that their voices will start to matter.”

Prof. Peter Nwangwu, a scientist and former presidential candidate, said that the country needed to be restructured to ensure full transformation.

“We need a Nigeria where there will be total mindset reengineering. There is the need to clean up the rubbish from bottom to top, to have a society that is equitable because there are good people in Nigeria.

“There are intelligent Nigerians; if we run this country right, it will be one of the best places on earth to live.

“People will come to this country because God has blessed it so much, but we have made an incredible mess of it.”

Others speakers at the meeting also spoke on the leadership challenge, national security, economy, corruption index, political development and credible elections, as well as citizens’ participation in politics. (NAN)