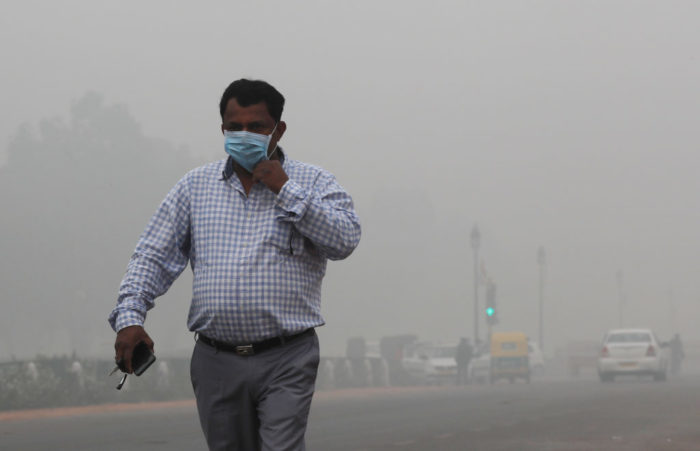 From an oxygen bar to artificial rain, a number of initiatives and ideas were floated in 2019 to battle air pollution crisis in India.

India is home to 15 of the 20 most polluted cities in the world, with New Delhi named as the capital with the dirtiest air, according to IQ AirVisual, a Swiss-based group that gathers air-quality data globally, and Greenpeace.

Large swathes of north India, including Delhi – a metropolis of about 20 million – are covered under a thick blanket of toxic air at the onset of winter.

Vehicle and industrial emissions, dust from building sites, smoke from the burning of rubbish and burning of crop fields contribute to what is locally dubbed as the “airpocalypse”.

Air pollution kills hundreds of thousands of Indian every year.

According to a WHO report, over 600,000 children die every year globally due to air pollution, with a total of over seven million premature deaths due to toxic air.

Delhi residents gasping for fresh air could head to Oxy Pure, a bar that offers 15 minutes of “oxygen enriched air” for about $7 in seven different flavors ranging from lavender and lemongrass to cinnamon and spearmint.

But it may be a costly affair in a country where the average person spends $1.80 a day, according to research by Goldman Sachs and news website IndiaSpend.

When pollution spiked to “hazardous” levels, Indians could go online and order themselves cans of fresh air.

Estimates suggest that the average adult inhales and exhales about 8 liters of air per minute.

For those who did not want to be cooped up inside on smoggy days, a wearable air purifier called AirTamer was the answer.

The 50 gram gadget, which can be worn as a necklace, emits negative ions that push pollutants away.

It sells for nearly 10,000 rupees in Delhi, a city described as a “gas chamber” by its own chief minister and where doctors say the air is as bad as smoking up to 20 cigarettes a day.

Delhi residents craving clear skies could turn to an anti-smog gun, which ejects fine droplets of water at high speeds to flush out air pollutants.

Shaped like a hair dryer and mounted on a flatbed truck, the cannon can blast up to 100 liters of water per minute and get rid of 95% of tiny particulate matter.

Critics, however, called it a quick-fix solution that could do little to combat the noxious air.

New Delhi’s authorities restricted the use of private cars for two weeks in November with the so-called “odd-even” system – allowing cars on alternate days, depending on whether their license plate ended in an odd or even number.

Authorities in the Indian capital considered cloud seeding developed by the Indian Institute of Technology (IIT) in an effort to trigger rainfall and bring pollution levels down.

But the plan was stalled as there were no planes or the technical support available to spray the seeds.

Dozens of giant air purifiers were installed at busy intersections of Delhi to combat roadside dust and vehicular pollution.

India’s top court in November ordered the federal and Delhi governments to install “smog towers” like those in China that can act as pollution vacuum cleaners.

Environmentalists, however, termed them as “band-aid fixes” that did not bring down small particulate matter that can penetrate the lungs and enter the blood system.

Two mobile air purifiers were fitted at the iconic Taj Mahal in November as a toxic haze shrouded the 17th century mausoleum, whose white marble is turning yellow and green weathering filthy air in the world’s eighth-most polluted city of Agra.

But many said it was gimmickry as people had to step out within minutes and expose themselves to smog.

Chakr Innovations, started by IIT engineers, capitalized on fumes from smoke-belching back-up diesel generators by turning the soot into ink and paint.

The technology can capture 90% of dangerous pollutants.

The company has installed more than 50 such devices in government firms and offices as well as real estate developers.