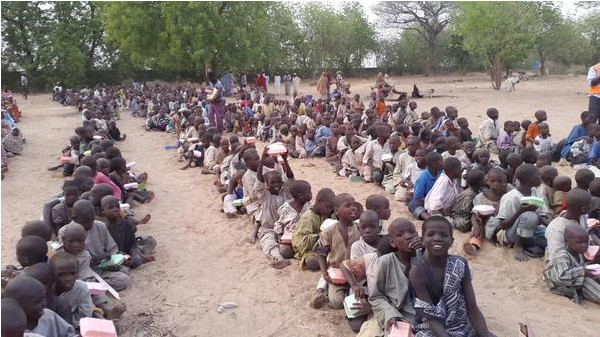 By Deborah Coker
Pst. Solomon Folorunsho, the Coordinator, Home for the Needy and the Internally Displaced Persons (IDP) Camp in Edo, has appealed for assistance from corporate organisations and philanthropists in tackling its feeding challenges.

Folorusho made the appeal in an interview with News Agency of Nigeria (NAN) on Saturday at the IDP camp in Uhorgua, near Benin.

He explained that though there were other challenges faced in the camp, feeding was the topmost challenge in the camp which presently has almost 4,000 inmates.

He explained that in feeding the inmates the camp uses an average of 10 bags of garri and 15 bags of rice per meal, adding that they are fed twice daily and on some rear occasions, thrice.

He told NAN that the camp was urgently in need of foodstuff to feed the inmates who were mostly survivors of terrorist attack in the North East and North Central, particularly from Borno state.

He also told NAN that another major challenge before the camp was the educational advancement of the inmates.

According to him, the centre has registered 200 inmates of the camp for the forthcoming Joint Admission and Matriculation Board (JAMB).

He revealed the camp was able to register them with the assistance of the Pentecostal Fellowship of Nigeria (PFN) that gave N1 million while the management of the camp sourced and added up the balance.

He also said that the camp needs more drugs for the clinic, which was built by the management of the International Christian Centre. (ICC).

The coordinator further disclosed that since the inception of the camp in 2014, the camp had recorded 29 births, while 1,600 inmates have been rehabilitated and released as they desired.

He explained that the births recorded were from inmates who came into the camp with pregnancy, adding that no life had been lost since its inception.