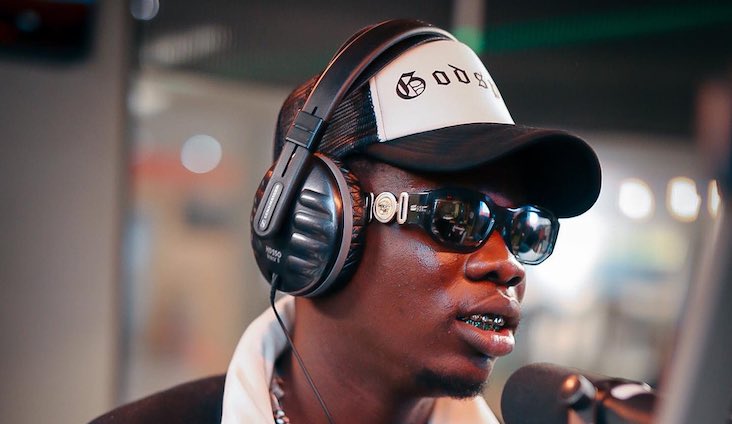 The energy is fever pitch now. This is the moment everyone packed in over the past few hours came to see: the two main guys in South African hip-hop right now sharing the stage, going toe-to-toe and, if you pay close attention, staking their claims to the throne. Sure, the multi award-winning Nasty C is without doubt still the current occupant of the rap throne, but Blxckie is closing in.

And he’s closing in fast. It’s been almost two years since Blxckie burst onto the scene with the infectious club banger ‘Big Time Shlappa’ after a string of hugely popular weekly SoundCloud releases. That run came in the midst of the first few months of the Covid-19 lockdowns that saw the whole world stuck indoors with not much to do.

Seeing this as an opportunity to get in people’s faces, Blxckie seized the moment as he began to churn out music. Originally from Durban, Blxckie found himself stuck in Joburg for a few months due to travel restrictions. He and rapper Lucas Raps formed an instant connection and collaborated on several songs. By the time the pair’s hit single ‘Big Time Shlappa’ dropped in October 2020, he’d already generated significant buzz on the streets and was on the brink of breaking into the mainstream.

I mean I owe it to the fans bro. There’s a lot of music out so it’s a little bit unfair for me not to perform those songs or whatever. So that’s what motivates me.

During his set, Blxckie brought out his long-time friend and collaborator Leo to perform a few of their songs together. While Leo is relatively unknown, what most people know is that the two have a relationship that runs deep thanks to ‘David’, one of the standouts from Blxckie’s debut album, B4Now.

On the song, Blxckie tells the story of how when they first arrived in Joburg in early 2020, they quickly realised that only one of them could stay and the other had to return home. “I was around with Leo, the chat was that he had to leave,” he raps on the song. “Matter of fact. it wasn’t even that simple, we had to choose him or me. But it’s Blxckie that’s closer to the dream. Had him packin’ his bags, shit was deep.” Blxckie eventually made the most of the opportunity and found his way to superstardom.

“I came with him to Jozi when we first came here,” Blxckie explains. “We stayed at a few places, mainly in the west and Centurion and Midrand. And then we had to make a decision. There’s two of you guys, so it’s a lot of admin and a lot of work to keep you guys here without you guys generating any revenue. It became a thing of someone has to go and someone has to stay, it can only be one person staying. So he made that decision that he’s gonna go back to Durban while I figure things out.” Leo’s back here and stays in Johannesburg. “It pretty much all worked out.”

We’re in the basement parking at Zone 6 Venue for a few minutes since he climbed off stage and made his way down here to chat with me before he heads off to his next gig. His voice is raspy and he looks exhausted. He’s been up and down like a mad man since ‘Ye X4’ hit in early 2021 and almost instantly catapulted him into one of the most in demand hip hop stars in South Africa.

I ask him how he found performing it and his other hits here. “Loved it. It’s always dope to have a controlled crowd that really wanted to come to hear Nasty’s music, or whoever else is worth it for them.” Despite a bout of fatigue kicking in, he somehow always finds an extra gear when he goes on stage.

“I mean I owe it to the fans bro. There’s a lot of music out so it’s a little bit unfair for me not to perform those songs or whatever. So that’s what motivates me. I need to see their reactions and the fans also need to feel the stuff that they’re hearing. When I came to Joburg, I told myself that I’m going to treat it is as an office or workspace so I was always mentally prepared for anything that would come my way in the name of ‘working’. But there has been a big switch up, especially since the lockdown sort of ended. I’m still learning to adjust to it better but right now I’m just trying to rest more and treat my voice often in order to give the best show all the time.”

Blxckie is wearing a Redbat utility vest, which is part of the merchandise from his deal with the brand. The collaboration was announced a few weeks ago during an exclusive event in which Blxckie was also awarded several gold and platinum plaques. Blxckie also took the opportunity to release a new single, ‘Khuphuka‘ on the same day.

One of the songs which went platinum is an amapiano cut called ‘Kwenzekile‘, which proved to be an instant hit when he released it shortly after his debut album last year. “Kwenzekile is a song that I made with Chang Cello and Hercule$ before Madumane (DJ Maphorisa) hopped on. Dr Peppa was also in the studio, and I really just wanted to make a song to thank everyone that helped me get to that particular point and also spread a message about letting go and moving on. The sound of the song is something I’ve been working on for a while with Hercule$, and I’ve always wanted to push it forward because it speaks to the masses. Maphorisa got on the hook just a few days before I was set to release the song, and the rest is history.”

Everything he’s touched since seems to turn to gold – from ‘Mntase’ to ‘Why Me?’ to, more recently, ‘Umoya’. Why is his music so popular? “I think I just gave the people what they kinda wanted,” he says.

“I’ve been studying the game and trying to figure out the gaps and where I need to fill in. It took a lot of time to do that, but then when I finally had the chance to put out music at the highest level, instead of just SoundCloud or any other free platform, it became evident that I studied and I knew where I was supposed to be in the game. I didn’t want to be like anyone else, I just wanted to give people something they’ve never heard before but also something that they really wanted to hear.”

Blxckie says he first realised that this strategy was working when he released the RnB ballad ‘Hold’. “Before ‘Hold’ it was just a lot of hip-hop songs, so the plan when I was still studying the game was to expand and be more than just a rapper. So when I dropped ‘Hold’, it took like two weeks for it to get to a crazy amount of views on just a visualiser, so that to me showed that it’s easy to kind of like branch out and see other avenues in music.”

Out of South Africa

Last year, Blxckie travelled to a few countries across the continent as part of a small press tour to mark the rapid expansion of his music. “It was actually my first time being out of South Africa. I did some interviews, studio sessions and a few shows. Since it was my first time out there, I didn’t really expect much. But I was pleased to find out that my music crossed the borders and people were ready to introduce me to their culture. There are plans to travel more. I gained a lot from the short time I was out of the country, and I feel like it’s only right for me to do that some more.”

In a few months, Blxckie will be joining US rap duo Earthgang as their special guest during the European leg of their world tour. In just two years, he’s crafted a solid catalogue that’s drawing the attention of listeners across the globe. And it doesn’t seem like he’s going to be slowing down anytime soon.