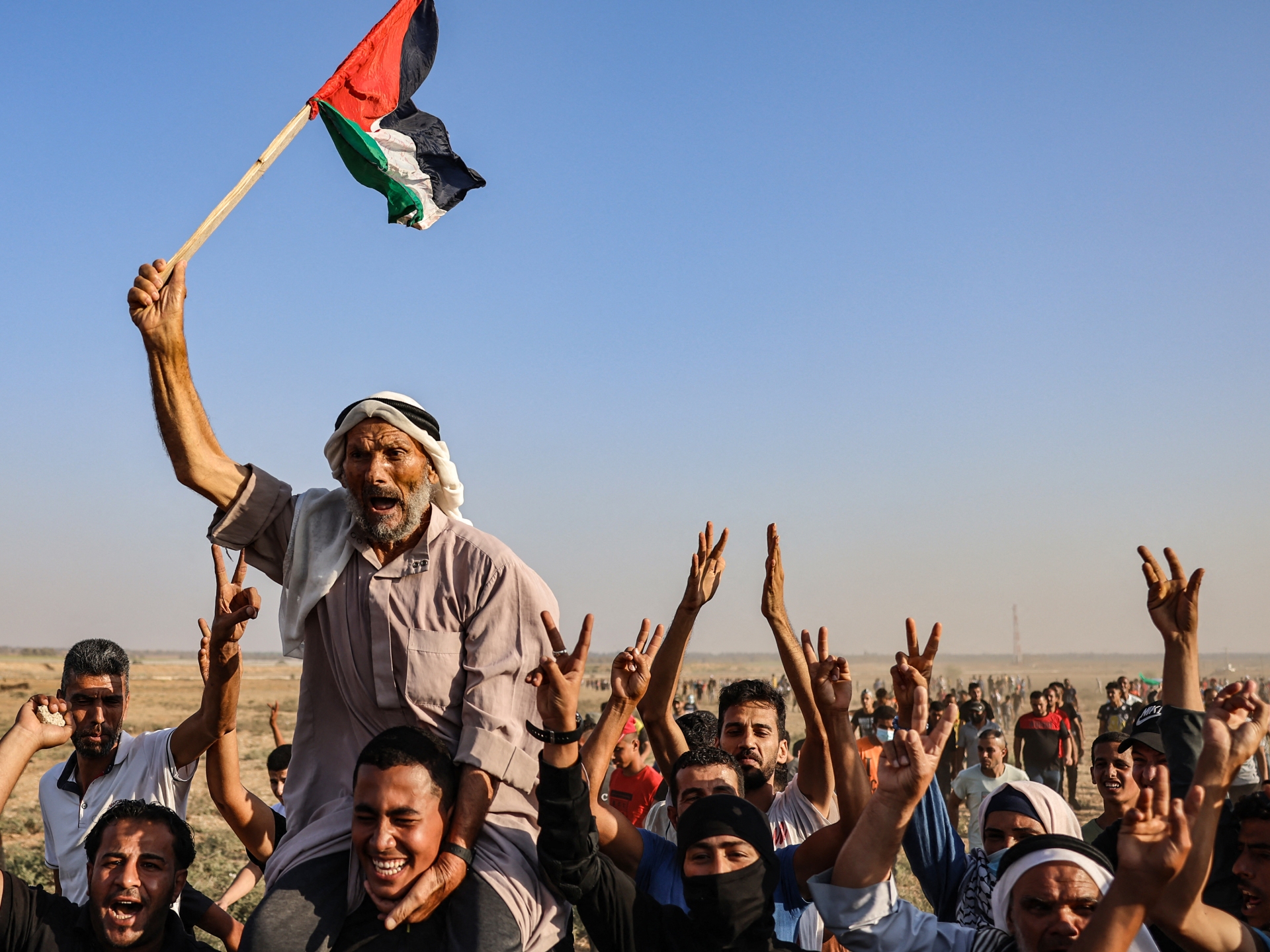 A 32-year-old professional footballer at a local club in the besieged Gaza Strip, Jaber started his sports career at an early age before going on to become a member of the Palestinian national team.

“It was a wonderful moment, the first time an Arab country will host the World Cup,” Fadi told Al Jazeera.

“At that time, my fellow footballers and I were thrilled. We were hoping we’d be there and attend the World Cup or even be able to take part in it.”

But Jaber and his colleagues knew it would be difficult, not because of the football but the restrictions Israel has placed on travelling.

Israel’s 15-year-old blockade which restricts the right to travel freely for Palestinians in the Gaza Strip has made the thought of going anywhere unattainable.

Imposed in 2007, Israel’s blockade has been a huge obstacle for more than two million Gazans facing strict restrictions on their movement, with human rights organisations describing the impoverished enclave as the largest open-air prison in the world.

“People in Gaza have a hard time travelling, whether through the Rafah crossing [run by Egypt] or the Erez crossing [run by Israel].” Fadi added. Erez is the Israeli name for the crossing otherwise known as Beit Hanoon to Palestinians.

“Traveling to attend the World Cup is a luxury here. People in Gaza consider travelling as something for an urgent need and it’s not as normal as other countries.”

The Qatar World Cup will kick off on November 20. As the first football World Cup to be hosted in the Middle East, it has become an eagerly awaited event for most Arabs in the region, including those in Gaza.

Israel’s restrictions on travel movement from Gaza also cast a shadow over the world of sports, including footballers who face difficulties in moving between the occupied West Bank and Gaza while also needing to travel out of Gaza to take part in football tournaments.

Due to the blockade, Jaber and his national team colleagues have been unable to participate in local, regional and continental championships. “As a footballer in the Palestinian national team, I cannot go to the West Bank to attend the local and Arab tournaments,” Jaber said.

“My fellow players and I always bemoan at the missed opportunities that could have changed our lives as footballers.

“The Palestinian footballers from Gaza are oppressed. We are part of the Palestinian people, and we are subjected to the restrictions that Israel imposes against us.”

Although FIFA, football’s world governing body, has always stressed that a safe environment must be provided for its international fans and players to move and travel, Palestinians say this was not the case for their national team.

Jaber believes FIFA has not made enough effort to support the Palestinian footballers from Gaza to facilitate their careers and travel to Qatar for the World Cup.

“Israel does not comply with any human rights or international organisations, including FIFA,” he said.

Alaa Attia, a 32-year-old footballer, told Al Jazeera that there is a “global disregard” for the situation of Palestinian football players and fans from the Gaza Strip.

“The Israeli footballers can easily travel all over the world. They have absolute freedom of travel while the Palestinian players are completely deprived.”

The ministers said the agreement came after months of talks with FIFA, saying it would open “a new door” to a country with which Israel does not currently have formal diplomatic relations.

“It is sad that we are denied the easy travel to an Arab country, while those who’re occupying our lands are allowed that chance freely,” Attia said.

“As footballers, we don’t mix politics with sports, but the matter is different for the Palestinian players.

“What is our fault that we cannot attend the World Cup in Qatar? We hope this matter will be reviewed and facilitated for the people in Gaza of their right of travel movement.”

Attia agreed with Jaber that FIFA has exerted pressure on Israel more than once but to no avail. He added that the governing body did not make enough effort to pressure Israel to allow Palestinians to travel freely.

“I do not understand why FIFA disregards the right of Palestinian players from Gaza to travel and participate in international tournaments. Why does it ignore our right to facilitate travel to Qatar?

“This is totally unfair and contrary to the principles that FIFA claims to have. It is a difficult feeling to see the whole world heading to the World Cup in Qatar, and because of the restrictions imposed on us in Gaza, we find ourselves deprived of this opportunity.”

As an enviable exception, Ahmed Owais, 60, a retired school principal, plans to travel to Qatar for the World Cup.

“I decided I will go for Qatar World Cup the moment it won the bid in 2010,” Owais told Al Jazeera.

“I had never thought before of attending the World Cup in other countries and I was more encouraged that I would be retired and without work commitments.”

Owais says he wants to travel to Qatar because it is an Arab country that has a strong international, global and sports presence, and supports the Palestinian cause.

“It is true that attending the World Cup is a luxury, but the difference in the Gaza Strip is that even those who have the financial possibility to leave, and travel cannot do so because of the many restrictions imposed on the crossings.

“Being close to the players you love and between the crowds is exciting. For the first time, I will be watching things that the camera doesn’t show. It’s totally different.

“I hope that the Gaza Strip will have an opportunity for professional athletes just like the West Bank, and football teams can move easily between the two places.”

Owais recounted the difficulties facing the national teams moving between the occupied West Bank and Gaza.

In the past, FIFA has said it would “continue to facilitate the movement of players, officials and football equipment in, out of, and within Palestine”.

However, following a complaint by the Palestinian Football Association (PFA), FIFA President Gianni Infantino said: “These territories are a concern for the international public law authorities and FIFA has to remain neutral”.

The PFA complained that the Israeli blockade hampers its activities, including restricting players’ movements and also banning some international travel.

According to the Reuters news agency, Israel has cited security concerns for its actions and the Israeli FA says it is not responsible for the actions of its government.

FIFA has turned a ‘blind eye’

But Ramy Abdu, the regional director of the Euro-Mediterranean Observer, told Al Jazeera that FIFA “has always exerted great pressure on several governments to urge them to abide by human rights standards”.

“FIFA exerted pressure on Iran in order to allow women to attend football matches and recently the suspension of Russian clubs,” he said.

Yet he says FIFA has turned “a blind eye” to Israeli violations, which are not limited to the political and humanitarian sector but to the sports sector as well.

“Israel has repeatedly obstructed the holding of the Palestine final matches by preventing the movement of Palestinian footballers between the Gaza Strip and the West Bank.

“Now, residents of the Gaza Strip will be unable to travel through the Israeli-controlled Erez crossing to attend the World Cup matches in Qatar, cementing the fact that the 15-year-old Israeli blockade suffocates all aspects of Palestinians’ daily lives in the Strip.”