How did an international footballer become a wanted man – then disappear? 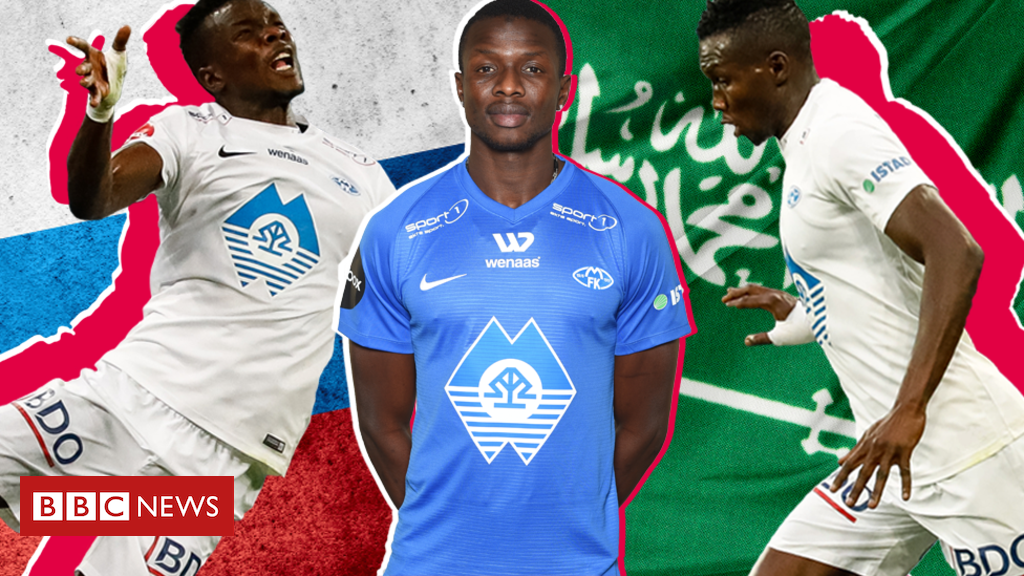 Babacar Sarr is a 29-year-old footballer who’s played in top teams across the globe, including in one of the world’s highest paying leagues.

He’s also a fugitive, wanted in a rape case in Norway and the subject of an international arrest warrant.

He maintains his innocence and now has dropped off the radar.

Sarr is a Senegalese midfielder who built his reputation in Norwegian football, before playing in the top leagues in Russia and Saudi Arabia.

He was a star player at Molde, a top league Norwegian club he joined in 2016. He played there for about two years when the club was managed by Ole Gunnar Solskjaer – who’s now the manager of Manchester United.

‘He was the engine of the team’

“Sarr was the engine, the motor of the team in a way,” says Lars Johnsen, a journalist from Josimar, an independent online football magazine based in Norway.

“He had all these qualities, was good on the ball – everything,” he tells Radio 1 Newsbeat.

But while his career flourished, Sarr faced multiple allegations of rape.

He was first accused in 2015, when he was playing for another Norwegian team. He was accused of raping a woman during an end-of-season trip to Stockholm. Police investigated but didn’t press charges.

After the move to Molde, Sarr faced further accusations of rape. He denies all the allegations against him.

In March 2018, he was charged for the first time, with a rape that allegedly took place at an after-party in an apartment in Molde in 2017.

Newsbeat spoke with the alleged victim who claims she woke to find him “on top of her”.

Sarr continued to play for Molde before his trial, leading to anti-rape campaigners turning up at the team’s matches with banners saying “No Means No”, and anti-rape chants being sung at games.

After a joint criminal and civil trial, Sarr was found not guilty in August 2018 of the criminal charge.

But he was ordered to pay his accuser compensation of 150,000 Norwegian kroner (around £12,500) after the court ruled in her favour on the civil claim. Both sides appealed against the result.

Sarr’s Molde contract was cancelled by mutual consent in January 2019. At the time, Norwegian papers reported that the club thanked him for his contribution “through a difficult time for the player as well as the club”.

The prosecution’s appeal hearing against his acquittal was set for February 2019. But it had to be delayed, because both the defendant and a witness didn’t appear in court.

In Norway, a criminal trial can’t go ahead for serious crimes if the suspect isn’t there, which is different to the UK.

‘A huge mistake by the police’

In February 2019, Sarr signed for Yenisey Krasnoyarsk, a team in the Russian Premier League.

Following huge investment by wealthy club owners, the Russian league is now the seventh highest-paid football division in the world. so it was a big move for Sarr in his footballing career.

The extradition process between Russia and other countries is known to be complicated.

Then in June last year, just before he was due to appear in court in Norway for the rescheduled appeal hearing, Sarr signed for another club, this time in Saudi Arabia.

Around the same time, it emerged that Norwegian prosecutors had issued an international arrest warrant for him through Interpol, the organisation that helps police across the world work together on serious crimes.

He joined Damac FC, a team on the rise in the Saudi top division, moving to a country where there is no extradition treaty with Norway. That means there was no agreement between those countries to send Sarr back to Norway for his case to be heard again in court.

But then in January, Sarr’s contract with Damac FC was suddenly cancelled before the end of the season.

Damac didn’t respond when Radio 1 Newsbeat asked why that was.

Around the same time, it emerged that he’d been charged with a second rape – one that was alleged to have taken place in Oslo, at Molde’s end-of-season party in November 2018.

That second charge was recently dropped because Oslo police failed to notify Babacar Sarr within three months after being asked by prosecutors – the time limit allowed under Norwegian law.

The Oslo state prosecutor’s office told us that the police were “unsuccessful in their attempts at serving the indictment on Mr Sarr”.

This has been described by a senior law professor at the University of Bergen as “a huge mistake by the police”.

Oslo police responded to Newsbeat saying they were unable to comment on cases that have been transferred to prosecutors.

No other club appears to have signed him.

There have been no sightings of him since the last of his 13 games with Damac.

A tweet that Damac had posted celebrating Sarr joining when he was signed last year appears to have been deleted, and Newsbeat could find no other references to him on the club’s account.

Sarr’s story has been in the news last month after one of his alleged victims told the Daily Telegraph that she thinks Solskjaer is “not fit to lead” Manchester United after his decision to keep playing Sarr at Molde after his original charge.

She thinks that football players charged with sexual assaults should not be allowed to continue playing until the case has been resolved.

“It’s about the signal it sends, especially when it’s someone’s kids who looks up to them,” she says.

Manchester United told The Telegraph that Solskjaer fully respected the due process of the Norwegian legal system.

In response to this case, UK campaigners have called for football clubs to suspend players if they are on trial for serious sexual offences.

‘Nothing strange about this situation’

With no club linked to him, Sarr’s whereabouts are unknown.

She says Sarr and his lawyers haven’t answered any communication from her.

Newsbeat has seen court documents showing Norwegian prosecutors asking Saudi Arabian officials where he is, but receiving no concrete answers.

Lars Johnsen, says all the indications are he’s still in Saudi Arabia, but he can’t be sure.

He believes Sarr will be looking for his next move and may soon leave Saudi Arabia if he hasn’t already.

For now, his location – as well as whether he’ll come back to Norway to face the appeal – are a mystery.

Sarr’s lawyer, Yvonne Larsen, told Newsbeat the issue of the first rape has been “dealt with already” because Sarr was found not guilty at his first trial.

She added that Sarr continued to play football while he was charged because “everyone is innocent until guilt is proved by the law, and Mr Sarr is still innocent”.

“There is nothing strange about this situation at all.”

As for one of the alleged victims, she has decided to move away from Molde.

She “doesn’t get her hopes up that the appeal will happen” and wants to rebuild her life in another city.