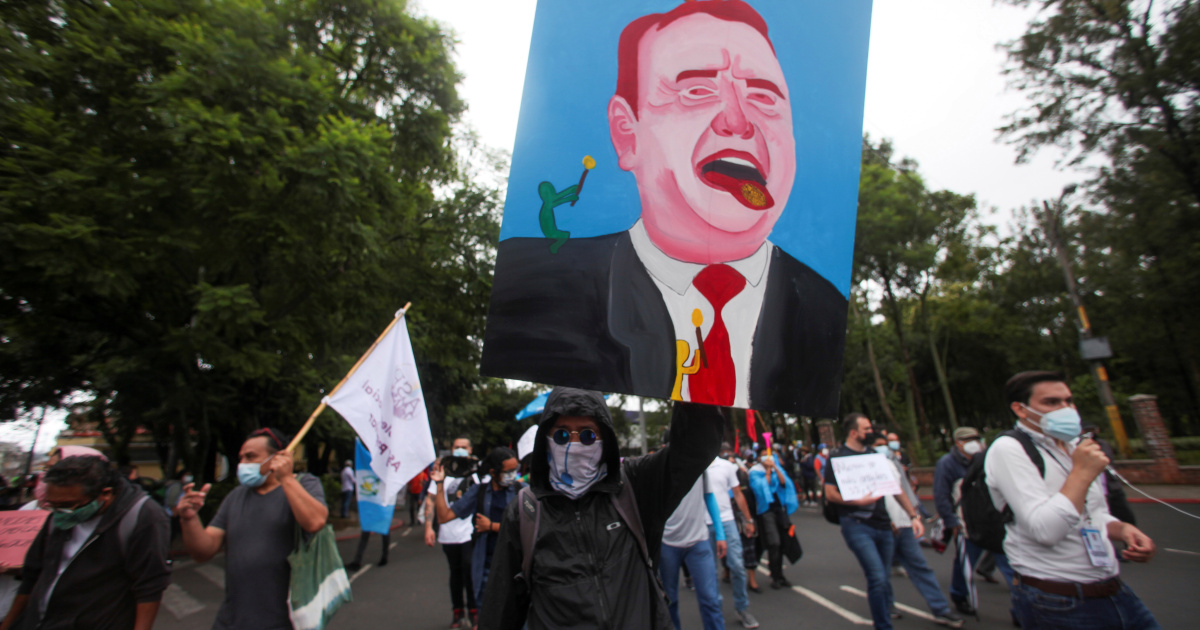 San Lucas Sacatepequez, Guatemala – Tens of thousands of Guatemalans took to the street to demand the resignation of the country’s president and attorney general due to the administration’s lack of willingness to address corruption.

The protests are among the largest and most widespread since 2015.

A few hundred gathered along the Inter-American highway in San Lucas Sacatepequez, in an at-times festive protest demanding President Alejandro Giammattei and Attorney General Maria Porras resign. The largely Indigenous protesters were joined by student groups and residents to participate in the national strike.

“We are demanding that Giammattei resign,” Angelina Aspuac, an activist with the Popular and Social Assembly, told Al Jazeera.

“We are fed up with seeing the corrupt actions of this government,” She said. “The decisions they make do not favour us, they allow and seek laws to generate impunity.”

Indigenous ancestral authorities called for protests days after Porras announced the removal of Juan Francisco Sandoval, the head of the Special Prosecutor’s Office Against Impunity. She accused Sandoval of “abuses of power,” but Sandoval suggested the existence of high-level corruption in the Public Prosecutor’s Office and in the Presidency.

Sandoval had received international attention, especially in the United States, for leading the anti-impunity bureau, which took over investigations from the internationally renowned United Nations-backed International Commission Against Impunity in Guatemala, known as CICIG, which closed its doors in 2019. He was forced to leave the country out of fear for his safety.

Following the removal of Sandoval, the US State Department deputy spokeswoman Jalina Porter announced on Tuesday that the US was partially suspending cooperation with Porras, stating that the US had “lost confidence” in the country’s willingness to fight corruption.

On Wednesday, Porras issued a letter to the State Department defending her actions during her time in office.

The effects of corruption are especially felt in rural areas, where state projects remain incomplete, highways exist in a state of disrepair, and where poverty and hunger have significantly increased during the COVID-19 pandemic.

“We know they are corrupt because they violate our rights,” Marcelino Cax, a member of the ancestral authorities of the Indigenous Kaqchikel Community of  Santa Fe Ocaña, San Juan Sacatepequez, told Al Jazeera at the roadblock.

Similar protests blocked major highways across the Central American country. Among the largest was held in Totonicapan, where thousands blocked an important intersection throughout the day.

The explosion of protests came more than a year after Giammattei assumed power. According to Renzo Rosal, an independent political analyst, the protests are an accumulation of social pressures that have emerged in Guatemala during the pandemic.

“This is the straw that broke the camel’s back,” Rosal told Al Jazeera.

“There is widespread questioning over the inability of the president’s management around the vaccines and the pandemic,” he explained. “We are seeing the accumulation of discontent. Last week’s [removal of Sandoval] was the final thing.”

Guatemala has seen corruption and impunity increase in the almost two years after then-President Jimmy Morales ended the agreement with the CICIG. In September 2019 the mission officially ended, shifting all cases to the Special Prosecutor’s Office Against Impunity.

The end of the CICIG opened the door to an increase in corruption.

“With the departure of CICIG, this scenario for corruption and impunity has been strengthened,” Rosal said. “The powerful actors of the country, I especially refer to the president, congressional representatives, and judges, are involved in controlling institutions,” he said. “They have the Public Prosecutor’s Office operating in their favour.”

Rosal suggests that Thursday’s protests are only the beginning.

“This shows the indignation and discontent,” he said. “This should be seen as the beginning.”