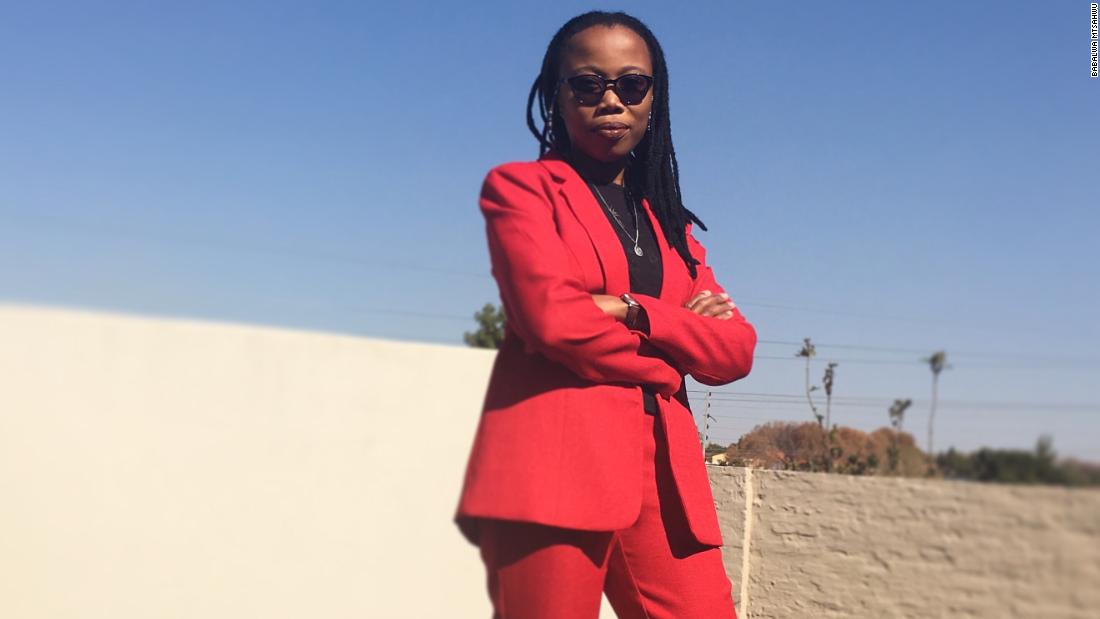 Born in Mthatha, a town in the Eastern Cape province of South Africa, she says her family’s conservative nature made it difficult for her to talk to anyone about her body.

“I was aware that something was not entirely right with my body from a young age because of all the signs. But coming from a black family where we are so traditional, we never talked about sexual or reproductive health,” Mtshawu told CNN.

At the age of 25, after years of trying to figure out why she was different, she finally booked an appointment with the doctor.

“The doctors ran some tests, and that’s when I discovered that I am intersex,” she said.

Intersex is a term used to describe a variety of conditions where a person is born with sexual or reproductive anatomy that does not fit the regular definitions of male or female.
The numbers are hard to come by but according to a report in the American journal of human biology, up to 1.7% of all live births are intersex.

Like Mtshawu, an intersex person may be born appearing to be female on the outside, but having mostly male-typical anatomy on the inside.

Dr. David Segal, who specializes in the diagnosis and treatment of people with growth and development disorders in Johannesburg, says there are many possible variations of being intersex, involving genitalia, chromosome patterns, and hormones.

For example, a person may be born with both testicular and ovarian tissues or have a combination of male and female chromosomes.
Some intersex traits are obvious at birth, others only manifest during puberty. And sometimes a person can live their whole life without ever discovering that they are intersex.

According to Segal, many people don’t understand intersexuality because they have not considered that anatomy and hormones do not have to be strictly male or female.

“Everybody wants to do a boy or a girl. There is no room for persons born outside this spectrum that has been created,” he told CNN.

Mtshawu, now 32, says babies discovered to be intersex at birth are sometimes killed due to the traditional belief that they are bad luck.

According to a 2018 report by South Africa’s Mail and Guardian newspaper, some traditional healers, midwives, and birth attendants have admitted to killing babies with indefinite genitalia.

These babies are considered a manifestation of sorcery and witchcraft.

Many intersex children are also subjected to non-consensual medical interventions.

In the 1960s, doctors found ways to perform surgeries intended to help patients keep to more conventional characteristics of one sex, but the outcomes of some of these surgeries did not follow the patients final gender identities.
These surgeries led some patients in the United States to feel a mismatch between their sex and gender, according to a 2017 Human Rights Watch report.
And in South Africa, according to a report submitted to the Office of the United Nations High Commissioner for Human Rights by the Legal Resource Center, a human rights organization, surgery is carried out on the genitals of newborn babies and children for cultural reasons.
Some of those subjected to these surgeries have declared it cruel and unnecessary, citing damage including sterility, genital sensitivity and post surgical depression, says the report.

Nthabiseng Mokoena, a human rights activist in South Africa says there is a lot of advocacy for unnecessary and coerced surgery on the genitals of intersex persons to suit social norms of what is considered male or female.

Mokoena, whose preferred pronoun is ‘they’ says some doctors prescribed surgery even though they didn’t have any health complications.

“Luckily, I had a very supportive mother, she protected me from unnecessary surgical interventions that the doctors were advocating for. She also taught me to respect and accept diversity at a young age,” they told CNN.

Now a lecturer at Stellenbosch University in Capetown, Mtshawu says there are many misconceptions about intersexuality.

When she publicly shared her story on YouTube, she received strange messages from people, “People think it is a cool thing to be intersex. Sometimes they say things like ‘I wish I were you so that I don’t have to worry about being pregnant’,” she said.
Gender and sexual diversity education are mandated by South Africa’s constitution, but not a lot of schools incorporate teaching sexual variations in their curriculum.

According to Mtshawu, educating students about intersexuality will reduce the existing misconceptions around it.

“The curriculum is slowly changing in South Africa, and I think it will be easy for them to teach intersex because it is just plain biology. This is a natural phenomenon, like someone being born without an arm or having an extra finger,” she told CNN.

Beyond misconceptions, there is also discrimination of persons with sex variations in schools, healthcare facilities, and competitive sports.

Last year, the International Association of Athletics Federations (IAAF) introduced a new regulation for female athletes with a difference of sexual development (DSD).
DSD is a condition where a person’s sex development involving genes, reproductive organs and hormones is different from other people’s.
According to the regulation, those with testosterone levels above a certain limit have to use medication to reduce their blood testosterone level for a continuous period of at least six months.
South African middle-distance runner and Olympic gold medalist, Caster Semenya, who has naturally high testosterone levels, is fighting this regulation in court and has accused the sports governing body of targeting her unfairly.
Semenya, 28, initially got a temporary lift on testosterone regulations but the Swiss Federal Tribunal in July reversed the regulation, ruling her out of international competitions like the World Championships taking place September in Doha.
Even though the court found the regulation too discriminatory, it also said that it was “necessary, reasonable and proportionate.”

Despite discrimination and abuse, it’s not all gloom and doom. South Africa has enacted laws to protect the rights of intersex persons.

The country’s Sex Description Act of 2003 legally recognizes intersex persons and allows them to alter their name and sex on birth certificates to suit their preferred gender role.
It also explicitly includes intersex persons within the definition of ‘sex’ in its anti-discrimination law. This law stipulates that intersex persons be treated as equals, without prejudice in South Africa.

Other countries like Kenya have also taken the lead in including persons with sex variations.

In August, for the first time ever, Kenya counted and included intersex persons in its population census, making it the first African country to do so.

Intersex persons are discriminated against because society does not have enough public information on intersexuality, says, Dr. David Segal.

“We are used to contrast. It’s either one is short or tall, skinny or fat, male or female, there’s no in-between and no consideration for other options. There is no biological understanding of what’s going on. If people understood it they wouldn’t discriminate,” he said.

Mtshawu says she is gradually embracing her identity but sometimes wishes she did not have to deal with the reality of being intersex.

“Right now I am embracing who I am, but it is not something I would have sought out given the chance,” she said.

East Africa: With Roads and Trade, Uganda Seeks to Build a Bridge Over DR Congo