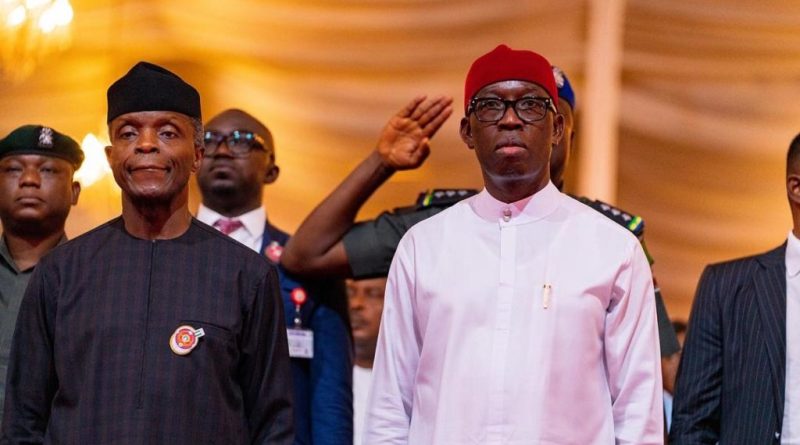 Gov. Ifeanyi Okowa of Delta has felicitated with Vice President Yemi Osinbajo, as he clocks 63 on March 8.

The governor, in a statement by his Chief Press Secretary Mr Olisa Ifeajika on Saturday in Asaba, lauded the Vice President’s contribution to the restoration of peace in the Niger Delta.

Okowa said that Osinbajo also deserved  commendation for his leadership role at  improving the nation’s economy as Chairman of the National Economic Council (NEC).

He said that the Vice President’s selfless service to the nation and his many accomplishments in personal and public life were some of the reasons he was being celebrated on the occasion of his 63rd birth anniversary.

Okowa said, “today, as always, we celebrate the grace of God on you and your family for the great things you are doing for our country.

“The diplomatic shuttles of Osinbajo to the states of the Niger Delta led to the cessation of hostilities and destruction of oil assets in the creeks of the region.

“As Chairman of the National Economic Council, you have played significant roles in the growth and development of the nation’s economy and we can’t thank you enough.

“On behalf of my family, the government and people of Delta, I congratulate His Excellency, the Vice President of Nigeria, Prof. Yemi Osinbajo, GCON, as he celebrates his 63rd birth anniversary.

“Your Excellency, the ideals of uncommon patriotism, unparalleled humility and sterling leadership qualities which you epitomise are worthy traits that will continue to inspire us in our Stronger Delta vision.

“As you celebrate this day, it is my prayer and that of Deltans, that God will continue to bless you with good health, wisdom and many more years in the service of God and country.” (NAN).